An open challenge to advance probabilistic forecasting for dengue epidemics 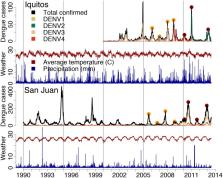 Forecasts routinely provide critical information for dangerous weather events but not yet for epidemics. Researchers develop computational models that can be used for infectious disease forecasting, but forecasts have not been broadly compared or tested. We collaboratively compared forecasts from 16 teams for 8 y of dengue epidemics in Peru and Puerto Rico. The comparison highlighted components that forecasts did well (e.g., situational awareness late in the season) and those that need more work (e.g., early season forecasts). It also identified key facets to improve forecasts, including using multiple model ensemble approaches to improve overall forecast skill. Future infectious disease forecasting work can build on these findings and this framework to improve the skill and utility of forecasts.

A wide range of research has promised new tools for forecasting infectious disease dynamics, but little of that research is currently being applied in practice, because tools do not address key public health needs, do not produce probabilistic forecasts, have not been evaluated on external data, or do not provide sufficient forecast skill to be useful. We developed an open collaborative forecasting challenge to assess probabilistic forecasts for seasonal epidemics of dengue, a major global public health problem. Sixteen teams used a variety of methods and data to generate forecasts for 3 epidemiological targets (peak incidence, the week of the peak, and total incidence) over 8 dengue seasons in Iquitos, Peru and San Juan, Puerto Rico. Forecast skill was highly variable across teams and targets. While numerous forecasts showed high skill for midseason situational awareness, early season skill was low, and skill was generally lowest for high incidence seasons, those for which forecasts would be most valuable. A comparison of modeling approaches revealed that average forecast skill was lower for models including biologically meaningful data and mechanisms and that both multimodel and multiteam ensemble forecasts consistently outperformed individual model forecasts. Leveraging these insights, data, and the forecasting framework will be critical to improve forecast skill and the application of forecasts in real time for epidemic preparedness and response. Moreover, key components of this project—integration with public health needs, a common forecasting framework, shared and standardized data, and open participation—can help advance infectious disease forecasting beyond dengue.

A systematic review of mathematical models of mosquito-borne pathogen transmission: 1970–2010

Robert Reiner,  T. Alex Perkins,  Christopher Barker … (2013)
Mathematical models of mosquito-borne pathogen transmission originated in the early twentieth century to provide insights into how to most effectively combat malaria. The foundations of the Ross–Macdonald theory were established by 1970. Since then, there has been a growing interest in reducing the public health burden of mosquito-borne pathogens and an expanding use of models to guide their control. To assess how theory has changed to confront evolving public health challenges, we compiled a bibliography of 325 publications from 1970 through 2010 that included at least one mathematical model of mosquito-borne pathogen transmission and then used a 79-part questionnaire to classify each of 388 associated models according to its biological assumptions. As a composite measure to interpret the multidimensional results of our survey, we assigned a numerical value to each model that measured its similarity to 15 core assumptions of the Ross–Macdonald model. Although the analysis illustrated a growing acknowledgement of geographical, ecological and epidemiological complexities in modelling transmission, most models during the past 40 years closely resemble the Ross–Macdonald model. Modern theory would benefit from an expansion around the concepts of heterogeneous mosquito biting, poorly mixed mosquito-host encounters, spatial heterogeneity and temporal variation in the transmission process.

Helen Wearing,  Pejman Rohani (2006)
The management of infectious diseases is an increasingly important public health issue, the effective implementation of which is often complicated by difficulties in teasing apart the relative roles of extrinsic and intrinsic factors influencing transmission. Dengue, a vector-borne strain polymorphic disease, is one such infection where transmission dynamics are affected by environmental variables as well as immune-mediated serotype interactions. To understand how alternative hypotheses concerning dengue infection and transmission may explain observed multiannual cycles in disease incidence, we adopt a theoretical approach that combines both ecological and immunological mechanisms. We demonstrate that, contrary to perceived wisdom, patterns generated solely by antibody-dependent enhancement or heterogeneity in virus virulence are not consistent with serotype-specific notification data in important ways. Furthermore, to generate epidemics with the characteristic signatures observed in data, we find that a combination of seasonal variation in vector demography and, crucially, a short-lived period of cross-immunity is sufficient. We then show how understanding the persistence and eradication of dengue serotypes critically depends on the alternative assumed mechanisms.

1To whom correspondence may be addressed. Email: mjohansson@ 123456cdc.gov .

This open access article is distributed under Creative Commons Attribution License 4.0 (CC BY).