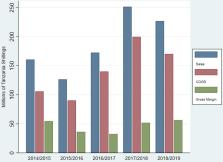 The Tanzania government sought support from The Global Fund to Fight AIDs, Tuberculosis and Malaria to reform its Medical Stores Department, with the aim of improving performance. The study sought to assess the impact of the reforms and document the lessons learnt.

Quantitative and qualitative research methods were applied to assess the impact of the reforms. The quantitative part entailed a review of operational and financial data covering the period before and after the implementation of the reforms. Interrupted time series analysis was used to determine the change in average availability of essential health commodities at health zones. Qualitative data were collected through 41 key informant interviews. Participants were identified through stakeholder mapping, purposive and snowballing sampling techniques and responses were analysed through thematic content analysis.

Positive results were realised through the reforms. However, despite the progress, there were risks such as the increasing government receivable that could jeopardise the sustainability of the gains. Therefore, multistakeholder efforts are necessary to make progress and expand public health.

Margaret Ewen,  Marjolein Zweekhorst,  Barbara Regeer … (2017)
Background WHO has set a voluntary target of 80% availability of affordable essential medicines, including generics, to treat major non-communicable diseases (NCDs), in the public and private sectors of countries by 2025. We undertook a secondary analysis of data from 30 surveys in low- and middle-income countries, conducted from 2008–2015 using the World Health Organization (WHO)/Health Action International (HAI) medicine availability and price survey methodology, to establish a baseline for this target. Methods Data for 49 medicines (lowest priced generics and originator brands) to treat cardiovascular diseases (CVD), diabetes, chronic obstructive pulmonary diseases (COPD) and central nervous system (CNS) conditions were analysed to determine their availability in healthcare facilities and pharmacies, their affordability for those on low incomes (based on median patient prices of each medicine), and the percentage of medicines that were both available and affordable. Affordability was expressed as the number of days’ wages of the lowest-paid unskilled government worker needed to purchase 30 days’ supply using standard treatment regimens. Paying more than 1 days’ wages was considered unaffordable. Findings In low-income countries, 15.2% and 18.9% of lowest-priced generics met WHO’s target in the public and private sectors, respectively, and 2.6% and 5.2% of originator brands. In lower-middle income countries, 23.8% and 23.2% of lowest priced generics, and 0.8% and 1.4% of originator brands, met the target in the public and private sectors, respectively. In upper-middle income countries, the situation was better for generics but still suboptimal as 36.0% and 39.4% met the target in public and private sectors, respectively. For originator brands in upper-middle income countries, none reached the target in the public sector and 13.7% in the private sector. Across the therapeutic groups for lowest priced generics, CVD medicines in low-income countries (11.9%), and CNS medicines in lower-middle (10.2%) and upper-middle income countries (33.3%), were least available and affordable in the public sector. In the private sector for lowest priced generics, CNS medicines were least available and affordable in all three country income groups (11.4%, 5.8% and 29.3% in low-, lower-middle and upper-middle income countries respectively). Interpretation This data, which can act as a baseline for the WHO target, shows low availability and/or poor affordability is resulting in few essential NCD medicines meeting the target in low- and middle-income countries. In the era of Sustainable Development Goals, and as countries work to achieve Universal Health Coverage, increased commitments are needed by governments to improve the situation through the development of evidence-informed, nationally-contextualised interventions, with regular monitoring of NCD medicine availability, patient prices and affordability.

Ongoing Initiatives to Improve the Quality and Efficiency of Medicine Use within the Public Healthcare System in South Africa; A Preliminary Study

Johanna Meyer,  Natalie Schellack,  Jacobus Stokes … (2017)
Introduction: South Africa has an appreciable burden of both communicable and non-communicable diseases as well as high maternal, neonatal, and child morbidity. In recent years there have been significant strides with improving the public health system, and addressing current inequalities, with the right to health a constitutional provision in South Africa. Initiatives include the introduction of National Health Insurance, programmes to enhance access to medicines for patients with chronic diseases, as well as activities to improve care in hospitals, including improving pharmacovigilance. Consequently, the objective of this paper is to review ongoing initiatives within the public healthcare sector in South Africa and their influence to provide future direction. Method: Principally a structured review of current and planned activities. Results: There have been a number of major activities and initiatives surrounding the availability and access to medicines in the public system in recent years in South Africa. This includes a National Surveillance Centre and an innovative early warning system for the supply of medicines as well as the development of a National Health Care Pricing Authority and initiatives to improve contracting. There have also been developments to improve the supply chain including instigating Medicine Procurement Units in the provinces and enhancing forecasting capabilities. Access to medicines is improving though the instigation of stable chronic disease management initiatives to increase the number of external pick-up points for medicines. There are also ongoing programmes to enhance adherence to medicines as well as enhance adherence to the Standard Treatment Guidelines and the Essential Medicines List with their increasing availability. In addition, there is a movement to enhance the role of health technology assessment in future decision making. Hospital initiatives include increased focus on reducing antimicrobial resistance through instigating stewardship programmes as well as improving adverse drug reaction reporting and associated activities. Conclusion: Overall, there are an appreciable number of ongoing activities within the public healthcare system in South Africa attempting to ensure and sustain universal healthcare. It is too early to assess their impact, which will be the subject of future research.