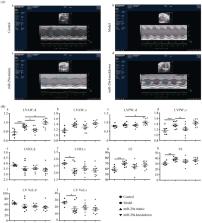 Left ventricular (LV) remodeling is the most common target organ damage in hypertension. Previously, our study found that plasma microRNA-29a (miR-29a) level was associated with the LV remodeling in hypertensive patients. However, the causal relationship between miR-29a and LV remodeling remains unknown. Thus, the aim of this study was to investigate the regulation mechanism of miR-29a in LV remodeling.

J. Hill,  Bernhard Schmierer (2007)
Ligands of the transforming growth factor-beta (TGFbeta) superfamily of growth factors initiate signal transduction through a bewildering complexity of ligand-receptor interactions. Signalling then converges to nuclear accumulation of transcriptionally active SMAD complexes and gives rise to a plethora of specific functional responses in both embryos and adult organisms. Current research is focused on the mechanisms that regulate SMAD activity to evoke cell-type-specific and context-dependent transcriptional programmes. An equally important challenge is understanding the functional role of signal strength and duration. How are these quantitative aspects of the extracellular signal regulated? How are they then sensed and interpreted, and how do they affect responses?

The first two authors contributed equally to this manuscript.

This is an open-access article distributed under the terms of the Creative Commons Attribution-NonCommercial-ShareAlike 3.0 Unported License, which allows readers to alter, transform, or build upon the article and then distribute the resulting work under the same or similar license to this one. The work must be attributed back to the original author and commercial use is not permitted without specific permission.