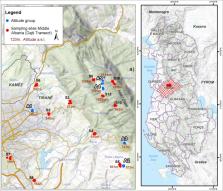 The rapid spread and settlement of Aedes albopictus mosquitoes across at least 28 countries in Europe, as well as several countries in Asia Minor, the Middle East and Africa, has made it one of the most invasive species of all time. Even though the biology of Ae. albopictus in its native tropical environment has been documented for a long time, the biology and ecology of this species in newly colonized temperate environments remain poorly known despite its important role as a vector for about twenty arboviruses. In this context, the main goals of this work were to investigate Ae. albopictus phenotypic variations at a local scale in Albania, the country where Ae. albopictus was first recorded in Europe, and to determine if its phenotypes could be affected by altitude. Analysis of Ae. albopictus wing phenotypes was performed using a geometric morphometric approach. We observed shape and size variations among altitudinal populations of Ae. albopictus. Differences of wing phenotypes were highlighted between altitude groups for male and female mosquitoes. The phenotypic variations observed in Ae. albopictus between altitudinal groups indicated these populations are exposed to environmental and ecological pressures. These results suggest the presence of phenotypic plasticity in this species.

Critical review of the vector status of Aedes albopictus.

N G Gratz (2004)
The mosquito Aedes (Stegomyia) albopictus (Skuse) (Diptera: Culicidae), originally indigenous to South-east Asia, islands of the Western Pacific and Indian Ocean, has spread during recent decades to Africa, the mid-east, Europe and the Americas (north and south) after extending its range eastwards across Pacific islands during the early 20th century. The majority of introductions are apparently due to transportation of dormant eggs in tyres. Among public health authorities in the newly infested countries and those threatened with the introduction, there has been much concern that Ae. albopictus would lead to serious outbreaks of arbovirus diseases (Ae. albopictus is a competent vector for at least 22 arboviruses), notably dengue (all four serotypes) more commonly transmitted by Aedes (Stegomyia) aegypti (L.). Results of many laboratory studies have shown that many arboviruses are readily transmitted by Ae. albopictus to laboratory animals and birds, and have frequently been isolated from wild-caught mosquitoes of this species, particularly in the Americas. As Ae. albopictus continues to spread, displacing Ae. aegypti in some areas, and is anthropophilic throughout its range, it is important to review the literature and attempt to predict whether the medical risks are as great as have been expressed in scientific journals and the popular press. Examination of the extensive literature indicates that Ae. albopictus probably serves as a maintenance vector of dengue in rural areas of dengue-endemic countries of South-east Asia and Pacific islands. Also Ae. albopictus transmits dog heartworm Dirofilaria immitis (Leidy) (Spirurida: Onchocercidae) in South-east Asia, south-eastern U.S.A. and both D. immitis and Dirofilaria repens (Raillet & Henry) in Italy. Despite the frequent isolation of dengue viruses from wild-caught mosquitoes, there is no evidence that Ae. albopictus is an important urban vector of dengue, except in a limited number of countries where Ae. aegypti is absent, i.e. parts of China, the Seychelles, historically in Japan and most recently in Hawaii. Further research is needed on the dynamics of the interaction between Ae. albopictus and other Stegomyia species. Surveillance must also be maintained on the vectorial role of Ae. albopictus in countries endemic for dengue and other arboviruses (e.g. Chikungunya, EEE, Ross River, WNV, LaCrosse and other California group viruses), for which it would be competent and ecologically suited to serve as a bridge vector.

The application of Bergmann's and Allen's Rules to the poikilotherms.

The global distribution of the arbovirus vectors Aedes aegypti and Ae. albopictus

Moritz Kraemer,  Marianne Sinka,  Kirsten A. Duda … (2015)
Dengue and chikungunya are increasing global public health concerns due to their rapid geographical spread and increasing disease burden. Knowledge of the contemporary distribution of their shared vectors, Aedes aegypti and Aedes albopictus remains incomplete and is complicated by an ongoing range expansion fuelled by increased global trade and travel. Mapping the global distribution of these vectors and the geographical determinants of their ranges is essential for public health planning. Here we compile the largest contemporary database for both species and pair it with relevant environmental variables predicting their global distribution. We show Aedes distributions to be the widest ever recorded; now extensive in all continents, including North America and Europe. These maps will help define the spatial limits of current autochthonous transmission of dengue and chikungunya viruses. It is only with this kind of rigorous entomological baseline that we can hope to project future health impacts of these viruses. DOI: http://dx.doi.org/10.7554/eLife.08347.001