Primary Hyperventilation in the Emergency Department: A First Overview 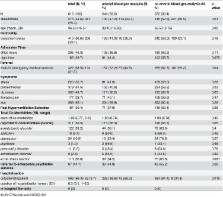 Our retrospective cohort study comprised adult (≥16 years) patients admitted to our ED between 1 January 2006 and 31 December 2012 with the primary diagnosis of primary (=psychogenic) hyperventilation.

Hyperventilation is a diagnostic chimera with a wide spectrum of symptoms. Patients predominantly are of young age, female sex and often have psychiatric comorbidities. The severity of symptoms accompanied with primary hyperventilation most often needs further work-up to rule out other diagnosis in a mostly young population. In the future, further prospective multicentre studies are needed to evaluate and establish clear diagnostic criteria for primary hyperventilation and possible screening instruments.

Guidelines for the physiotherapy management of the adult, medical, spontaneously breathing patient.

Rudolf Hoehn-Saric,  Madzia P. Kowalski,  Sarah F. Funderburk … (2004)
Physiologic responses of patients with anxiety disorders to everyday events are poorly understood. To compare self-reports and physiologic recordings in patients with panic disorder (PD), patients with generalized anxiety disorder (GAD), and nonanxious controls during daily activities. Participants underwent four 6-hour recording sessions during daily activities while wearing an ambulatory monitor. Physiologic and subjective data were recorded every 30 minutes and during subject-signaled periods of increased anxiety or tension or panic attack. Participants' everyday environment. Twenty-six patients with PD and 40 with GAD, both without substantial comorbidity, and 24 controls. Recordings obtained during everyday activities. Recordings of heart interbeat intervals, skin conductance levels, respirations, motion, and ratings of subjective somatic symptoms and tension or anxiety. Patients with anxiety disorders rated higher on psychic and somatic anxiety symptoms than did controls. Common to both anxiety disorders was diminished autonomic flexibility that manifested itself throughout the day, accompanied by less precise perception of bodily states. The main differences between patients with PD and GAD were a heightened sensitivity to body sensations and more frequent button presses. There also was a trend toward heightened basal arousal in patients with PD, manifesting itself in a faster heart rate throughout the day. Patients with PD or GAD are more sensitive to bodily changes than nonanxious individuals, and patients with PD are more sensitive than those with GAD. Patients with PD experience more frequent distress than those with GAD and controls, but their physiologic responses are comparable in intensity. The findings suggest that the perception of panic attacks reflects central rather than peripheral responses. The diminished autonomic flexibility observed in both anxiety conditions may result from dysfunctional information processing during heightened anxiety that fails to discriminate between anxiety-related and neutral inputs.

Harry B. Rossiter,  Sandy Jack,  B Whipp … (2004)
Idiopathic hyperventilation (IH) is a poorly understood condition of sustained hypocapnia and controversial etiology. Although behavioral/emotional factors may contribute, it is uncertain whether chemosensitivity is altered, hyperventilation is maintained during exercise, and the associated breathlessness reflects the hyperventilation. In 39 patients with IH and 23 control subjects, we described ventilatory responses to isocapnic-hypoxia, hyperoxic-hypercapnia, and exercise; breath-hold tolerance; breathlessness; and psychologic status. Patients demonstrated hyperventilation at rest, with hypocapnia (28 +/- 3.8 mm Hg), a normal (slightly alkaline) arterial pH and [H(+)]a, and a significant base excess (-4.5 +/- 2.7 mEq/L), consistent with compensated respiratory alkalosis. Hyperventilation was sustained during exercise, despite hyperoxic-hypercapnic ventilatory responsiveness being normal and isocapnic-hypoxic ventilatory responsiveness being low relative to control (but exceeding control [2.4 +/- 1.0 vs. 1.6 +/- 0.5 L/min/%, p < 0.05] with acute restoration to normocapnia). Hyperventilation was maintained during exercise, at the resting CO(2) "setpoint." Relative to control, the breath-hold tolerance was attenuated, and dyspnea during exercise was significantly greater and not simply ascribable to the high ventilation. These observations suggest that patients with IH have a sustained hyperventilatory and dyspneic drive that, although not attributable to central chemosensitivity, may possibly have peripheral chemoreflex contributions. The nature and etiology of this chronic hyperventilatory drive remain unclear.