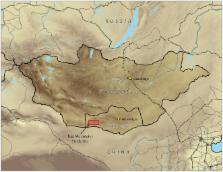 Accurate information about the diet of large carnivores that are elusive and inhabit inaccessible terrain, is required to properly design conservation strategies. Predation on livestock and retaliatory killing of predators have become serious issues throughout the range of the snow leopard. Several feeding ecology studies of snow leopards have been conducted using classical approaches. These techniques have inherent limitations in their ability to properly identify both snow leopard feces and prey taxa. To examine the frequency of livestock prey and nearly-threatened argali in the diet of the snow leopard, we employed the recently developed DNA-based diet approach to study a snow leopard population located in the Tost Mountains, South Gobi, Mongolia. After DNA was extracted from the feces, a region of ∼100 bp long from mitochondrial 12S rRNA gene was amplified, making use of universal primers for vertebrates and a blocking oligonucleotide specific to snow leopard DNA. The amplicons were then sequenced using a next-generation sequencing platform. We observed a total of five different prey items from 81 fecal samples. Siberian ibex predominated the diet (in 70.4% of the feces), followed by domestic goat (17.3%) and argali sheep (8.6%). The major part of the diet was comprised of large ungulates (in 98.8% of the feces) including wild ungulates (79%) and domestic livestock (19.7%). The findings of the present study will help to understand the feeding ecology of the snow leopard, as well as to address the conservation and management issues pertaining to this wild cat.

ITS as an environmental DNA barcode for fungi: an in silico approach reveals potential PCR biases

Eva Bellemain,  Tor Carlsen,  Christian Brochmann … (2010)
Background During the last 15 years the internal transcribed spacer (ITS) of nuclear DNA has been used as a target for analyzing fungal diversity in environmental samples, and has recently been selected as the standard marker for fungal DNA barcoding. In this study we explored the potential amplification biases that various commonly utilized ITS primers might introduce during amplification of different parts of the ITS region in samples containing mixed templates ('environmental barcoding'). We performed in silico PCR analyses with commonly used primer combinations using various ITS datasets obtained from public databases as templates. Results Some of the ITS primers, such as ITS1-F, were hampered with a high proportion of mismatches relative to the target sequences, and most of them appeared to introduce taxonomic biases during PCR. Some primers, e.g. ITS1-F, ITS1 and ITS5, were biased towards amplification of basidiomycetes, whereas others, e.g. ITS2, ITS3 and ITS4, were biased towards ascomycetes. The assumed basidiomycete-specific primer ITS4-B only amplified a minor proportion of basidiomycete ITS sequences, even under relaxed PCR conditions. Due to systematic length differences in the ITS2 region as well as the entire ITS, we found that ascomycetes will more easily amplify than basidiomycetes using these regions as targets. This bias can be avoided by using primers amplifying ITS1 only, but this would imply preferential amplification of 'non-dikarya' fungi. Conclusions We conclude that ITS primers have to be selected carefully, especially when used for high-throughput sequencing of environmental samples. We suggest that different primer combinations or different parts of the ITS region should be analyzed in parallel, or that alternative ITS primers should be searched for.

Boris Worm,  Marianna K Baum (2009)
1. Top-down control can be an important determinant of ecosystem structure and function, but in oceanic ecosystems, where cascading effects of predator depletions, recoveries, and invasions could be significant, such effects had rarely been demonstrated until recently. 2. Here we synthesize the evidence for oceanic top-down control that has emerged over the last decade, focusing on large, high trophic-level predators inhabiting continental shelves, seas, and the open ocean. 3. In these ecosystems, where controlled manipulations are largely infeasible, 'pseudo-experimental' analyses of predator-prey interactions that treat independent predator populations as 'replicates', and temporal or spatial contrasts in predator populations and climate as 'treatments', are increasingly employed to help disentangle predator effects from environmental variation and noise. 4. Substantial reductions in marine mammals, sharks, and piscivorous fishes have led to mesopredator and invertebrate predator increases. Conversely, abundant oceanic predators have suppressed prey abundances. Predation has also inhibited recovery of depleted species, sometimes through predator-prey role reversals. Trophic cascades have been initiated by oceanic predators linking to neritic food webs, but seem inconsistent in the pelagic realm with effects often attenuating at plankton. 5. Top-down control is not uniformly strong in the ocean, and appears contingent on the intensity and nature of perturbations to predator abundances. Predator diversity may dampen cascading effects except where nonselective fisheries deplete entire predator functional groups. In other cases, simultaneous exploitation of predator and prey can inhibit prey responses. Explicit consideration of anthropogenic modifications to oceanic foodwebs should help inform predictions about trophic control. 6. Synthesis and applications. Oceanic top-down control can have important socio-economic, conservation, and management implications as mesopredators and invertebrates assume dominance, and recovery of overexploited predators is impaired. Continued research aimed at integrating across trophic levels is needed to understand and forecast the ecosystem effects of changing oceanic predator abundances, the relative strength of top-down and bottom-up control, and interactions with intensifying anthropogenic stressors such as climate change.

J Carpten,  Julian Somers,  M R Brownstein (1996)
Taq DNA polymerase can catalyze non-templated addition of a nucleotide (principally adenosine) to the 3' end of PCR-amplified products. Recently, we showed that this activity, which is primer-specific, presents a potential source of error in genotyping studies based on the use of short tandem repeat (STR) markers. Furthermore, in reviewing our data, we found that non-templated nucleotide addition adjacent to a 3' terminal C is favored and that addition adjacent to a 3' terminal A is not. It was clear, however, that features of the template in addition to the 3' terminal base also affect the fraction of product adenylated. To define consensus sequences that promote or inhibit product adenylation, we transplanted sequences between the 5' ends of the reverse primers of markers that are adenylated and those of markers that are not adenylated. It proved difficult to identify a single sequence capable of protecting the products of all markers from non-templated addition of nucleotide. On the other hand, placing the sequence GTTTCTT on the 5' end of reverse primers resulted in nearly 100% adenylation of the 3' end of the forward strand. This modification or related ones (called "PIG-tailing") should facilitate accurate genotyping and efficient T/A cloning.

Publisher ID: PONE-D-11-22734
DOI: 10.1371/journal.pone.0032104
PMC ID: 3290533
PubMed ID: 22393381
Copyright statement: Shehzad et al. This is an open-access article distributed under the terms of the Creative Commons Attribution License, which permits unrestricted use, distribution, and reproduction in any medium, provided the original author and source are credited.