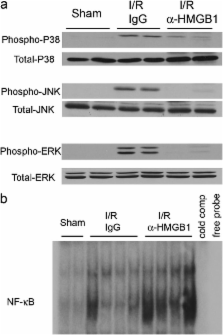 High-mobility group box 1 (HMGB1) is a nuclear factor that is released extracellularly as a late mediator of lethality in sepsis as well as after necrotic, but not apoptotic, death. Here we demonstrate that in contrast to the delayed role of HMGB1 in the systemic inflammation of sepsis, HMGB1 acts as an early mediator of inflammation and organ damage in hepatic ischemia reperfusion (I/R) injury. HMGB1 levels were increased during liver I/R as early as 1 h after reperfusion and then increased in a time-dependent manner up to 24 h. Inhibition of HMGB1 activity with neutralizing antibody significantly decreased liver damage after I/R, whereas administration of recombinant HMGB1 worsened I/R injury. Treatment with neutralizing antibody was associated with less phosphorylation of c-Jun NH 2-terminal kinase and higher nuclear factor–κB DNA binding in the liver after I/R. Toll-like receptor 4 (TLR4)-defective (C3H/Hej) mice exhibited less damage in the hepatic I/R model than did wild-type (C3H/HeOuj) mice. Anti-HMGB1 antibody failed to provide protection in C3H/Hej mice, but successfully reduced damage in C3H/Ouj mice. Together, these results demonstrate that HMGB1 is an early mediator of injury and inflammation in liver I/R and implicates TLR4 as one of the receptors that is involved in the process.

Marco Bianchi,  Tom Misteli,  Paola Scaffidi (2002)
High mobility group 1 (HMGB1) protein is both a nuclear factor and a secreted protein. In the cell nucleus it acts as an architectural chromatin-binding factor that bends DNA and promotes protein assembly on specific DNA targets. Outside the cell, it binds with high affinity to RAGE (the receptor for advanced glycation end products) and is a potent mediator of inflammation. HMGB1 is secreted by activated monocytes and macrophages, and is passively released by necrotic or damaged cells. Here we report that Hmgb1(-/-) necrotic cells have a greatly reduced ability to promote inflammation, which proves that the release of HMGB1 can signal the demise of a cell to its neighbours. Apoptotic cells do not release HMGB1 even after undergoing secondary necrosis and partial autolysis, and thus fail to promote inflammation even if not cleared promptly by phagocytic cells. In apoptotic cells, HMGB1 is bound firmly to chromatin because of generalized underacetylation of histone and is released in the extracellular medium (promoting inflammation) if chromatin deacetylation is prevented. Thus, cells undergoing apoptosis are programmed to withhold the signal that is broadcast by cells that have been damaged or killed by trauma.

HMG-1 as a late mediator of endotoxin lethality in mice.

William Frazier,  O Bloom,  K Tracey … (1999)
Endotoxin, a constituent of Gram-negative bacteria, stimulates macrophages to release large quantities of tumor necrosis factor (TNF) and interleukin-1 (IL-1), which can precipitate tissue injury and lethal shock (endotoxemia). Antagonists of TNF and IL-1 have shown limited efficacy in clinical trials, possibly because these cytokines are early mediators in pathogenesis. Here a potential late mediator of lethality is identified and characterized in a mouse model. High mobility group-1 (HMG-1) protein was found to be released by cultured macrophages more than 8 hours after stimulation with endotoxin, TNF, or IL-1. Mice showed increased serum levels of HMG-1 from 8 to 32 hours after endotoxin exposure. Delayed administration of antibodies to HMG-1 attenuated endotoxin lethality in mice, and administration of HMG-1 itself was lethal. Septic patients who succumbed to infection had increased serum HMG-1 levels, suggesting that this protein warrants investigation as a therapeutic target.

Edward Abraham,  J. Park,  Yeol Kim … (2004)
High mobility group box 1 (HMGB1) protein, originally described as a DNA-binding protein that stabilizes nucleosomes and facilitates transcription, can also be released extracellularly during acute inflammatory responses. Exposure of neutrophils, monocytes, or macrophages to HMGB1 results in increased nuclear translocation of NF-kappaB and enhanced expression of proinflammatory cytokines. Although the receptor for advanced glycation end products (RAGE) has been shown to interact with HMGB1, other putative HMGB1 receptors are known to exist but have not been characterized. In the present experiments, we explored the role of RAGE, Toll-like receptor (TLR) 2, and TLR 4, as well as associated kinases, in HMGB1-induced cellular activation. Culture of neutrophils or macrophages with HMGB1 produced activation of NF-kappaB through TLR 4-independent mechanisms. Unlike lipopolysaccharide (LPS), which primarily increased the activity of IKKbeta, HMGB1 exposure resulted in activation of both IKKalpha and IKKbeta. Kinases and scaffolding proteins downstream of TLR 2 and TLR 4, but not TLR/interleukin-1 receptor (IL-1R)-independent kinases such as tumor necrosis factor receptor-associated factor 2, were involved in the enhancement of NF-kappaB-dependent transcription by HMGB1. Transfections with dominant negative constructs demonstrated that TLR 2 and TLR 4 were both involved in HMGB1-induced activation of NF-kappaB. In contrast, RAGE played only a minor role in macrophage activation by HMGB1. Interactions of HMGB1 with TLR 2 and TLR 4 may provide an explanation for the ability of HMGB1 to generate inflammatory responses that are similar to those initiated by LPS.