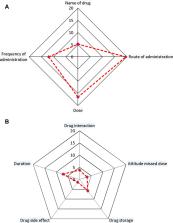 A facility-based cross-sectional study was employed among 403 patients attending in the outpatient pharmacy of Chencha primary level hospital. The data collection techniques were observation of dispensing process and face-to-face interview by using WHO patient care indicators and a structured questionnaire, respectively. Descriptive statistics, univariable and multivariable logistic regression were determined using the SPSS version 20.

This study showed inadequate level of knowledge of dispensed medicine among patients attending in outpatient pharmacy of Chencha primary level hospital. Patient education, employment status, number of visits, perception of illness, dispenser qualification and experience were the factors for knowledge of dispensed medicine. Dispensers need into account patients’ perception of their illness of illness and frequency of visits during counseling.

John D Potter,  D Lau,  Judith D Kasper … (2005)
This study examines the association of potentially inappropriate medication prescribing (PIRx) with hospitalization and death among elderly long-stay nursing home residents. We defined PIRx using the combined version of the Beers criteria. Data were from the 1996 Medical Expenditure Panel Survey Nursing Home Component. The study sample included 3372 residents, 65 years and older, who had nursing home stays of 3 consecutive months or longer in 1996. We performed multivariate logistic regression analyses of longitudinal data using generalized estimating equations. Residents who received any PIRx had greater odds (odds ratio [OR], 1.27; P = .002) of being hospitalized in the following month than those receiving no PIRx. Residents with PIRx exposure for 2 consecutive months were at increased risk (OR, 1.27; P = .004) of hospitalization, as were those receiving PIRx in the second month only (OR, 1.80; P = .001), compared with those receiving no PIRx. Residents who received PIRx were at greater risk of death (OR, 1.28; P = .01) that month or the next. Residents with intermittent PIRx exposures were at greater odds of death (OR, 1.89; P<.001), compared with those with no PIRx exposure. The association of PIRx with subsequent adverse outcomes (hospitalization and death) provides new evidence of the importance of improving prescribing practices in the nursing home setting.

Inappropriate prescribing and related hospital admissions in frail older persons according to the STOPP and START criteria.

Association between potentially inappropriate medications from the Beers criteria and the risk of unplanned hospitalization in elderly patients.

Sylvie Price,  C Holman,  Frank M Sanfilippo … (2014)
Predisposition to adverse drug events with advancing age has led to the development of lists of potentially inappropriate medications (PIMs) to be avoided in the elderly, such as the Beers Criteria. The prevalence of Beers medications has been studied widely, but it is still unclear whether PIM use is predictive of adverse events in older people.