Extract of Cycas revoluta Thunb. enhances the inhibitory effect of 5-ﬂuorouracil on gastric cancer cells through the AKT-mTOR pathway 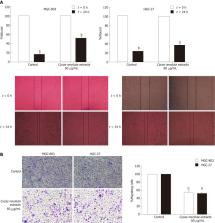 Gastric cancer is one of the most common and deadly malignancies worldwide. Despite recent medical progress, the 5-year survival rate of gastric cancer is still unsatisfactory. 5-ﬂuorouracil (5-Fu) is one of the first-line antineoplastic treatments for gastric cancer, as it can effectively induce cancer cell apoptosis. However, the effect of 5-Fu is limited due to drug resistance of the malignant tumor. Previous studies have reported that Sotetsuflavone from Cycas revoluta Thunb. can markedly suppress lung cancer cell proliferation by apoptosis, though its effect on gastric cancer remains unknown.

To investigate the inhibitory effect of Cycas revoluta Thunb. and to determine whether it can overcome gastric cancer cell drug resistance to 5-Fu.

Cell viability was examined to determine whether the natural extract of Cycas revoluta Thunb. induced gastric cancer cell death. The half-maximal effective concentration and the half-maximal lethal concentration were calculatede. Wound-healing and transwell assays were performed to examine gastric cancer cell motility. Clonogenic assays were performed to investigate the synergistic effects of Cycas revoluta Thunb. with 5-Fu, and apoptotic bodies were detected by Hoechst staining. Western blotting was performed to examine the expression of related proteins and to investigate the molecular mechanism of Cycas revoluta Thunb.-induced cancer cell apoptosis. The expressions of proteins, including mammalian target of rapamycin (mTOR) and p-AKT, were detected in different combinations of treatments for 48 h, then analyzed by ECL detection.

Gastric cancer cells were more sensitive to the natural extract of Cycas revoluta Thunb. compared to normal gastric epithelial cells, and the extract effectively inhibited gastric cancer cell migration and invasion. The extract improved the anti-cancer effect of 5-Fu by enhancing the chemosensitization of gastric cancer cells. Extract plus 5-Fu further reduced the expression of the drug-resistance-related proteins p-AKT and mTOR after 48 h compared to 5-Fu alone. Compared to 5-Fu treatment alone, mTOR and p-AKT expression was significantly reduced by about 50% and 75%, respectively. We also found that the natural extract of Cycas revoluta Thunb. further increased 5-Fu-induced gastric cancer cell apoptosis. Expression of apoptosis-related protein X-linked inhibitor of apoptosis protein and apoptosis inducing factor were significantly reduced and increased, respectively, in the 5-Fu-resistant gastric cancer line SGC-7901/R treated with extract plus 5-Fu, while the expression of survivin did not change.

Cleavage of BID by caspase 8 mediates the mitochondrial damage in the Fas pathway of apoptosis.

Honglin Li,  Hong Zhu,  Chi-jie Xu … (1998)
We report here that BID, a BH3 domain-containing proapoptotic Bcl2 family member, is a specific proximal substrate of Casp8 in the Fas apoptotic signaling pathway. While full-length BID is localized in cytosol, truncated BID (tBID) translocates to mitochondria and thus transduces apoptotic signals from cytoplasmic membrane to mitochondria. tBID induces first the clustering of mitochondria around the nuclei and release of cytochrome c independent of caspase activity, and then the loss of mitochondrial membrane potential, cell shrinkage, and nuclear condensation in a caspase-dependent fashion. Coexpression of BclxL inhibits all the apoptotic changes induced by tBID. Our results indicate that BID is a mediator of mitochondrial damage induced by Casp8.

Gastric Cancer: How Can We Reduce the Incidence of this Disease?

Caroline M. den Hoed,  Ernst J. Kuipers (2016)
Gastric cancer remains a prevalent disease worldwide with a poor prognosis. Helicobacter pylori plays a major role in gastric carcinogenesis. H. pylori colonization leads to chronic gastritis, which predisposes to atrophic gastritis, intestinal metaplasia, dysplasia, and eventually gastric cancer. Screening, treatment, and prevention of H. pylori colonization can reduce the incidence of gastric cancer. Other interventions that may yield a similar effect, although of smaller magnitude, include promotion of a healthy lifestyle including dietary measures, non-smoking, low alcohol intake, and sufficient physical activity. This chapter reviews interventions that can lead to a decline in gastric cancer incidence in high and low incidence countries.

Céline Candé,  Isabelle Cohen-Codar,  Eric Daugas … (2015)
Apoptosis-inducing factor (AIF) is a phylogenetically ancient mitochondrial intermembrane flavoprotein endowed with the unique capacity to induce caspase-independent peripheral chromatin condensation and large-scale DNA fragmentation when added to purified nuclei. In addition to its apoptogenic activity on nuclei, AIF can also participate in the regulation of apoptotic mitochondrial membrane permeabilization and exhibits an NADH oxidase activity. Under normal circumstances, AIF is secluded behind the outer mitochondrial membrane. However, upon apoptosis induction AIF translocates to the cytosol and the nucleus. Injection of anti-AIF antibodies or knockout of the AIF gene have demonstrated that AIF may be required for cell death occurring in response to some stimuli. In particular, inactivation of AIF renders embryonic stem cells resistant to cell death following growth factor withdrawal. Moreover, AIF is essential for programmed cell death during cavitation of embryoid bodies, the very first wave of (caspase-independent) cell death indispensable for mouse morphogenesis. We have recently found that AIF is neutralized by heat-shock protein (HSP) 70, in a reaction that appears to be independent of ATP or the ATP-binding domain (ABD) of HSP70 and thus differs from the previously described Apaf-1/HSP70 interaction (which requires ATP and the HSP70 ABD). Intriguingly, HSP70 lacking ABD (HSP70 Delta ABD) inhibits apoptosis induced by serum withdrawal, staurosporin, and menadione, three models of apoptosis which are also affected by micro-injection of anti-AIF antibody or genetic ablation of AIF. Altogether, these data suggest that AIF plays a role in the regulation of caspase-independent cell death.