Neuropathological Staging of Brain Pathology in Sporadic Parkinson’s disease: Separating the Wheat from the Chaff 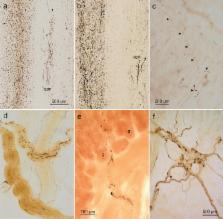 A relatively small number of especially susceptible nerve cell types within multiple neurotransmitter systems of the human central, peripheral, and enteric nervous systems (CNS, PNS, ENS) become involved in the degenerative process underlying sporadic Parkinson’s disease (sPD). The six-stage model we proposed for brain pathology related to sPD ( Neurobiol Aging 2003) was a retrospective study of incidental and clinically diagnosed cases performed on unconventionally thick tissue sections (100 μm) from a large number of brain regions.The staging model emphasized what we perceived to be a sequential development of increasing degrees of Lewy pathology in anatomically interconnected regions together with the loss of aminergic projection neurons in, but not limited to, the locus coeruleus and substantia nigra. The same weight was assigned to axonal and somatodendritic Lewy pathology, and the olfactory bulb was included for the first time in a sPD staging system. After years of research, it now appears that the earliest lesions could develop at nonnigral (dopamine agonist nonresponsive) sites, where the surrounding environment is potentially hostile: the olfactory bulb and, possibly, the ENS. The current lack of knowledge regarding the development of Lewy pathology within the peripheral autonomic nervous system, however, means that alternative extra-CNS sites of origin cannot be disregarded as possible candidates. The PD staging system not only caused controversy but contributed a framework for (1) assessing pathology in the spinal cord, ENS, and PNS in relationship to that evolving in the brain, (2) defining prodromal disease and cohorts of at-risk individuals, (3) developing potential prognostic biomarkers for very early disease, (4) testing novel hypotheses and experimental models of α-synuclein propagation and disease progression, and (5) finding causally-oriented therapies that intervene before the substantia nigra becomes involved. The identification of new disease mechanisms at the molecular and cellular levels indicates that physical contacts (transsynaptic) and transneuronal transmission between vulnerable nerve cells are somehow crucial to the pathogenesis of sPD.

C Hawkes,  K Del Tredici,  H Braak (2007)
Accumulating evidence suggests that sporadic Parkinson's disease has a long prodromal period during which several non‐motor features develop, in particular, impairment of olfaction, vagal dysfunction and sleep disorder. Early sites of Lewy pathology are the olfactory bulb and enteric plexus of the stomach. We propose that a neurotropic pathogen, probably viral, enters the brain via two routes: (i) nasal, with anterograde progression into the temporal lobe; and (ii) gastric, secondary to swallowing of nasal secretions in saliva. These secretions might contain a neurotropic pathogen that, after penetration of the epithelial lining, could enter axons of the Meissner's plexus and, via transsynaptic transmission, reach the preganglionic parasympathetic motor neurones of the vagus nerve. This would allow retrograde transport into the medulla and, from here, into the pons and midbrain until the substantia nigra is reached and typical aspects of disease commence. Evidence for this theory from the perspective of olfactory and autonomic dysfunction is reviewed, and the possible routes of pathogenic invasion are considered. It is concluded that the most parsimonious explanation for the initial events of sporadic Parkinson's disease is pathogenic access to the brain through the stomach and nose – hence the term ‘dual‐hit’.

Robert K. Shepherd,  Katharine Sturm-Ramirez,  Robert G. Webster … (2009)
One of the greatest influenza pandemic threats at this time is posed by the highly pathogenic H5N1 avian influenza viruses. To date, 61% of the 433 known human cases of H5N1 infection have proved fatal. Animals infected by H5N1 viruses have demonstrated acute neurological signs ranging from mild encephalitis to motor disturbances to coma. However, no studies have examined the longer-term neurologic consequences of H5N1 infection among surviving hosts. Using the C57BL/6J mouse, a mouse strain that can be infected by the A/Vietnam/1203/04 H5N1 virus without adaptation, we show that this virus travels from the peripheral nervous system into the CNS to higher levels of the neuroaxis. In regions infected by H5N1 virus, we observe activation of microglia and alpha-synuclein phosphorylation and aggregation that persists long after resolution of the infection. We also observe a significant loss of dopaminergic neurons in the substantia nigra pars compacta 60 days after infection. Our results suggest that a pandemic H5N1 pathogen, or other neurotropic influenza virus, could initiate CNS disorders of protein aggregation including Parkinson's and Alzheimer's diseases.