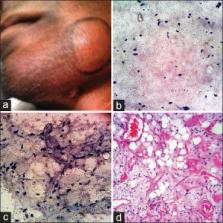 ScienceOpenPublisherPMC
Bookmark
There is no author summary for this article yet. Authors can add summaries to their articles on ScienceOpen to make them more accessible to a non-specialist audience.
Sir, Lipoma is a slow growing benign tumor, that usually occurs in the upper back and neck and is clinically asymptomatic.[1] Many benign histological variants of lipoma are known and described based on the type of tissue present and predominance in the lesion: Fibrolipoma, angiolipoma, myolipoma, myxolipoma, spindle cell lipoma, osteolipoma, chondrolipoma and spindle cell lipoma (SCL).[2] SCL is a distinct histological entity derived from prelipoblastic mesenchymal cells,[3] and occurs predominantly in the posterior neck and upper back of middle-aged to elderly men. However, up to 20% of SCLs occur outside this characteristic location, and rarely, they can be seen on the face.[4] Histopathological features of SCL consist of an admixture of mature fat cells with varying number of spindle-shaped cells.[4 5] A 37-year-old man presented to the department of dermatology for the evaluation of a painless swelling on his left cheek from 10 months. Past medical history and family history were noncontributory to the present swelling. Physical examination revealed a soft-to-firm dome-shaped mass on the left lower part of the face measuring approximately 2 × 2 cm in dimension. The overlying skin of the swelling was similar to the color of the face without showing any sign of inflammation [Figure 1a]. Patient was referred for fine needle aspiration (FNA) procedure. Procedure was performed using a 22-gauge needle attached to a 10-ml syringe. A mucoid material was yielded from the lesion. Ninety-five percent alcohol fixed smear was prepared and hematoxylin and eosin staining was carried out. Cytological evaluation of the aspirate revealed numerous benign, spindle-shaped cells with bland, spindle, and wavy nuclei in a loose cohesive myxoid background with collagen fibers [Figure 1b], as well as abundant mature adipocytes with a cluster of capillaries [Figure 1c]. An initial impression of SCL was made. An incisional biopsy was performed and the tissue was subjected to hematoxylin and eosin staining. Histological examination of the soft tissue section revealed a cellular connective tissue stroma composed of numerous benign spindle cells with abundant myxoid areas, numerous mature adipocytes, and dilated vascular channels [Figure 1d]. Based on the cytological and histological findings, a final diagnosis of SCL was rendered. Surgical excision and reconstruction was performed with the help of a plastic surgeon. No recurrence was occurred. Figure 1 (a) Clinical picture of the swelling (marked site for FNA procedure). (b) FNAC, spindle cells with, mature adipocytes and mucoid stroma (H and E, ×40). (c) FNAC, collection of numerous benign spindle cells, collagen fibers, and mature adipocytes (H and E, ×40). (d) Histological examination reveals characteristic features of SCL including collection of numerous typical spindle cells, with mature adipocytes, myxoid areas, and dilated vascular channels (H and E, ×40) The diagnostic efficacy of FNA cytology (FNAC) is well-known for the diagnosis of tumor in different locations; however, its efficacy as a sole diagnostic tool in soft tissue tumors is debated,[5] especially in case of epithelioid and spindle cell tumors.[4] Hence, histopathology is still considered a gold standard for their evaluation.[1 2 5] Diagnosis of SCL based on its FNAC findings is a challenge. Differential diagnoses of SCL in FNA are atypical lipomatous tumor (ALT) and myxolipoma. ALT shows lipoblasts with atypia; on the other hand, SCL comprises blend spindle cells with minimum polymorphism and mitoses.[6] In myxolipomas, the aspirate is usually viscous and spindle cells population is not much pronounced in comparison to SCL.[7] Differentiation between ALT and SCL is of utmost importance; the clinically suspecting lesion with extensive adipocytic component prompts cytopathologist to carry out a meticulous search of lipoblasts to rule out ALT.[6] This case is an attempt to describe the cytopathological features of SCL that can guide cyotopathologists to permit a definitive diagnosis of SCL on FNA smears. Declaration of patient consent The authors certify that they have obtained all appropriate patient consent forms. In the form the patient(s) has/have given his/her/their consent for his/her/their images and other clinical information to be reported in the journal. The patients understand that their names and initials will not be published and due efforts will be made to conceal their identity, but anonymity cannot be guaranteed. Financial support and sponsorship Nil. Conflicts of interest There are no conflicts of interest.

R Falzoni, Simone F. Pires, E Fregnani … (2003)
Lipomas represent about 1 to 5% of all neoplasms of the oral cavity. Although relatively common, few large series of intraoral lipomas and its variants are seen in the literature. Therefore, the authors present the clinical, histological and immunohistochemical features of 46 cases of intraoral lipomas reviewed from the files of the University of Campinas Dental School from 1970 to 2001. Most of the cases affected adults, without gender predilection, and the main involved sites were the buccal mucosa (21 cases), tongue (six cases), lips (six cases) and floor of mouth (five cases). The histological analysis revealed 21 cases of lipoma, 18 fibrolipomas, four intramuscular lipomas, two minor salivary gland lipomas and one spindle cell lipoma. PCNA and ki-67 expression indexes were higher in spindle cell lipoma, intramuscular lipomas and fibrolipomas compared to common lipomas, but the differences were not statistically significant. All lesions were removed surgically and none showed recurrence, regardless of the various proliferative activities.

Osteolipoma of the palate – An unusual presentation

Manas Bajpai, Manish Kumar, Deshant Agarwal … (2014)
Sir, Although not common in the mouth, lipoma is the most common benign mesenchymal neoplasia of soft tissues in adults.[1] Around 20% of the cases involve the head and neck region and only 1–4% occur in the oral cavity.[1 2] Osteolipoma is very rare variant of lipoma accounts for less than 1% of all the cases.[3] Oral lipomas mostly occur in the buccal mucosa, floor of the mouth, tongue, and lips. Only two cases of osteolipoma of the palate have been reported in English literature: One was congenital osteolipoma associated with a cleft palate in a 6-year-old male child[4] and the second was reported in a 37-year-old female Nigerian patient.[5] We present a rare case of osteolipoma of the hard palate in a 55-year-old male patient. A 55-year-old male presented with a chief complaint of palatal swelling posterior to the incisive papilla from 4 years. Both the past medical history and systemic signs are not relevant with the case. Extraoral examination did not reveal any abnormality. On intraoral examination a yellowish pink firm-to-hard palatal swelling measuring about 1.5 × 1.5 cm was noted [Figure 1]. Figure 1 Yellowish pink firm-to-hard palatal swelling The swelling was nontender on palpation and overlying mucosa was normal in color without showing any signs of ulceration and erythema. On radiographic examination by oclusal radiographs, a patchy area of radiopacity was revealed. On the basis of clinical features, provisional diagnosis of ossifying fibroma was made. The lesion was surgically excised under local anesthesia by raising the mucoperiosteal flap and a soft yellowish white mass measuring 1.5 × 1 cm [Figure 2] was sent for the histopathological examination. Microscopical examination revealed normal bony trabeculae with the features of osteoblastic rimming, surrounded by mature adipocytes with compressed nuclei at the cell border [Figure 3]. Connective tissue septa were found intervening the adipocytes at places [Figure 4]. No dysplastic features were noted. On the basis of all the histopathological features, a final diagnosis of osteolipoma was established. Follow-up visits were uneventful. Figure 2 Gross tissue sent for histopathological examination Figure 3 Bony trabeculae surrounded by mature adipocytes Figure 4 Connective tissue septa intervening adipocytes Many benign histological variants of lipoma are known and described based on the type of tissue present and predominant in the lesion: Fibrolipoma, angiolipoma, myolipoma, myxolipoma, spindle cell lipoma, osteolipoma, and chondrolipoma.[1 2 3 4 5 6] Lipomas with osseous or cartilaginous metaplasia is a rare histological variant. Osteolipoma is a variant of lipoma that shows osseous metaplasia accounts for less than 1%[4] and is seen at many extra-oral sites including scapula, vertebral spine, neck, skull, suprasellar region, and tuber cinereum.[4 6] A differential diagnosis suggesting osteolipoma primarily depends on its location. Because of the various anatomic sites reported for this lesion, a very wide range of lesions can be included in the differential diagnosis, such as other benign tumors that may contain bone including teratoma[2] In addition, tumor calcinosis, ossifying fibroma, central hemangioma, and myositis ossificans should also be considered.[2 6] Soft-tissue sarcomas that can show calcification or ossification include liposarcoma, synovial sarcoma, osteosarcoma, and chondrosarcoma. Soft-tissue chondromas, which are also rare, are frequently mineralized. Also some series showed that osteolipoma mimicked well-differentiated liposarcoma.[4] The diagnosis of oteolipoma is easy, and surgical excision is the treatment of choice. The prognosis of osteolipoma is favorable like conventional lipomas, but lesions should be monitored carefully and postoperative follow-up is also required as not much information is available pertaining to this rare tumor.

M Åkerman, F Mertens, K. Jönsson … (2001)
Spindle cell lipoma (SCL) is a relatively uncommon, benign tumor that usually presents in the subcutaneous fat of adult men. Although some studies have addressed the histologic findings of SCL, only a few descriptions of aspiration cytology findings have been published. The cytologic features are poorly defined, and aspirates from SCL may cause diagnostic problems, because SCL shares some features with other fatty/spindle cell or myxoid lesions, benign as well as malignant. Twelve patients underwent fine-needle aspiration (FNA) cytology as the primary diagnostic modality before surgery. FNA findings were evaluated and correlated with histologic features. In addition, radiologic, electron microscopic, and cytogenetic findings were analyzed. The objective of this study was to determine cytologic criteria of SCL by reviewing cytologic specimens in 12 patients with SCL who underwent FNA cytology. All of the tumors arose in adults, and 10 tumors developed in the subcutaneous tissue of the neck, back, or shoulder girdle. Two patients presented with tumors in atypical locations; one in the tongue and one in the cheek. Cytologically, all 12 tumors were characterized by a mixture of mature adipocytes, uniform spindle cells, and collagen bundles and/or fibers in varying proportions. The presence of a myxoid matrix and of mast cells was less specific and occurred in six aspirates. SCL has a characteristic cytologic appearance that, together with clinical data, helps to exclude low-grade liposarcoma as well as other spindle cell and myxoid lesions. Cancer (Cancer Cytopathol) 2001 American Cancer Society.