Surgical accuracy, function, and quality of life of simultaneous versus staged bilateral Total hip Arthroplasty in patients with Osteonecrosis of the femoral head 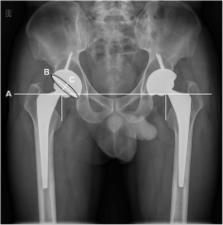 The optimal surgical option for patients requiring bilateral hip replacement remains controversial. The purpose of this study was to compare surgical accuracy; functional outcome and health-related quality of life; and prosthetic-related complications and revision surgery of a simultaneous bilateral total hip arthroplasty (THA) with those of a staged bilateral THA with an interval between procedures <12 months.

A total of 123 unselected consecutive patients (mean age, 43.3 years) who underwent bilateral THAs for osteonecrosis of the femoral head (ONFH) with a minimum follow-up of two years (mean, 60.2 months) were studied retrospectively; 63 simultaneous procedures served as a test group and 60 staged procedures served as a control group.

We suggest that bilateral ONFH could be treated with a simultaneous THA rather than a staged THA to achieve a better surgical outcome.

Nontraumatic Osteonecrosis of the Femoral Head: Where Do We Stand Today? A Ten-Year Update.

Michael Mont,  Jeffrey J Cherian,  Rafael J Sierra … (2015)
➤ Although multiple theories have been proposed, no one pathophysiologic mechanism has been identified as the etiology for the development of osteonecrosis of the femoral head. However, the basic mechanism involves impaired circulation to a specific area that ultimately becomes necrotic.➤ A variety of nonoperative treatment regimens have been evaluated for the treatment of precollapse disease, with varying success. Prospective, multicenter, randomized trials are needed to evaluate the efficacy of these regimens in altering the natural history of the disease.➤ Joint-preserving procedures are indicated in the treatment of precollapse disease, with several studies showing successful outcomes at mid-term and long-term follow-up.➤ Studies of total joint arthroplasty, once femoral head collapse is present, have described excellent outcomes at greater than ten years of follow-up, which is a major advance and has led to a paradigm shift in treating these patients.➤ The results of hemiresurfacing and total resurfacing arthroplasty have been suboptimal, and these procedures have restricted indications in patients with osteonecrosis of the femoral head.

The John Charnley Award: risk factors for cup malpositioning: quality improvement through a joint registry at a tertiary hospital.

David Zurakowski,  Henrik Malchau,  Harry Rubash … (2011)
Few studies have examined factors that affect acetabular cup positioning. Since cup positioning has been linked to dislocation and increased bearing surface wear, these factors affecting cup position are important considerations. We determined the percent of optimally positioned acetabular cups and whether patient and surgical factors affected acetabular component position. We obtained postoperative AP pelvis and cross-table lateral radiographs on 2061 consecutive patients who received a THA or hip resurfacing from 2004 to 2008. One thousand nine hundred and fifty-two hips had AP pelvic radiographs with correct position of the hip center, and 1823 had both version and abduction angles measured. The AP radiograph was measured using Hip Analysis Suite™ to calculate the cup inclination and version angles, using the lateral film to determine version direction. Acceptable ranges were defined for abduction (30°-45°) and version (5°-25°). From the 1823 hips, 1144 (63%) acetabular cups were within the abduction range, 1441 (79%) were within the version range, and 917 (50%) were within the range for both. Surgical approach, surgeon volume, and obesity (body mass index > 30) independently predicted malpositioned cups. Comparison of low versus high volume surgeons, minimally invasive surgical versus posterolateral approach, and obesity versus all other body mass index groups showed a twofold (1.5-2.8), sixfold (3.5-10.7), and 1.3-fold (1.1-1.7) increased risk for malpositioned cups, respectively. Factors correlated to malpositioned cups included surgical approach, surgeon volume, and body mass index with increased risk of malpositioning for minimally invasive surgical approach, low volume surgeons, and obese patients. Further analyses on patient and surgical factors' influence on cup position at a lower volume medical center would provide a valuable comparison. Level II, prognostic study. See Guidelines for Authors for a complete description of levels of evidence.