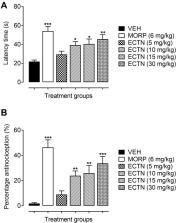 Postoperative pain remains a major clinical problem as there are limited analgesic strategies that have been proven to be effective in preventing and relieving this type of pain. Natural products, including flavonoids, have distinct pharmacological properties and play an important role in the discovery of analgesic drugs.

In this study, the flavonoid eriocitrin (eriodictyol 7- O-rutinoside), which is the main flavonoid in lemon fruit ( Citrus limon), was mechanistically investigated for its prospective antinociceptive effect in a mouse model of postoperative pain. The antinociceptive property was evaluated by utilizing both tonic (acetic acid-induced writhing behavior) and phasic (hot-plate) nociception modalities. The hindpaw incisional surgery was performed and hyperalgesia was assessed using von Frey filaments.

The antinociceptive effect of eriocitrin (30 mg/kg) was strongly blocked by the antagonists of the opioid receptor, naltrexone, and GABA A receptor, bicuculline, thereby suggesting the involvement of opioidergic and GABAergic mechanisms in the nociception, reducing proclivity of eriocitrin during transmission of incisional nociception. These results concluded that eriocitrin has a potent antinociceptive effect in postoperative pain conditions, probably mediated through opioid and GABA A receptors.

Veerabhadram Garimella,  Christina Cellini (2013)
The effective relief of pain is of the utmost importance to anyone treating patients undergoing surgery. Pain relief has significant physiological benefits; hence, monitoring of pain relief is increasingly becoming an important postoperative quality measure. The goal for postoperative pain management is to reduce or eliminate pain and discomfort with a minimum of side effects. Various agents (opioid vs. nonopioid), routes (oral, intravenous, neuraxial, regional) and modes (patient controlled vs. "as needed") for the treatment of postoperative pain exist. Although traditionally the mainstay of postoperative analgesia is opioid based, increasingly more evidence exists to support a multimodal approach with the intent to reduce opioid side effects (such as nausea and ileus) and improve pain scores. Enhanced recovery protocols to reduce length of stay in colorectal surgery are becoming more prevalent and include multimodal opioid sparing regimens as a critical component. Familiarity with the efficacy of available agents and routes of administration is important to tailor the postoperative regimen to the needs of the individual patient.

Maria Isabel Azevedo,  Anamaria Falcão Pereira,  Ricardo Braz Nogueira … (2013)
Background Oxaliplatin, the third-generation platinum compound, has evolved as one of the most important therapeutic agents in colorectal cancer chemotherapy. The main limiting factor in oxaliplatin treatment is painful neuropathy that is difficult to treat. This side effect has been studied for several years, but its full mechanism is still inconclusive, and effective treatment does not exist. Data suggest that oxaliplatin’s initial neurotoxic effect is peripheral and oxidative stress-dependent. A spinal target is also suggested in its mechanism of action. The flavonoids rutin and quercetin have been described as cell-protecting agents because of their antioxidant, antinociceptive, and anti-inflammatory actions. We proposed a preventive effect of these agents on oxaliplatin-induced painful peripheral neuropathy based on their antioxidant properties. Methods Oxaliplatin (1 mg/kg, i.v.) was injected in male Swiss mice, twice a week (total of nine injections). The development of sensory alterations, such as thermal and mechanical allodynia, was evaluated using the tail immersion test in cold water (10°C) and the von Frey test. Rutin and quercetin (25-100 mg/kg, i.p.) were injected 30 min before each oxaliplatin injection. The animals’ spinal cords were removed for histopathological and immunohistochemical evaluation and malondialdehyde assay. Results Oxaliplatin significantly increased thermal and mechanical nociceptive response, effects prevented by quercetin and rutin at all doses. Fos immunostaining in the dorsal horn of the spinal cord confirmed these results. The oxidative stress assays mainly showed that oxaliplatin induced peroxidation in the spinal cord and that rutin and quercetin decreased this effect. The flavonoids also decreased inducible nitric oxide synthase and nitrotyrosine immunostaining in the dorsal horn of the spinal cord. These results suggest that nitric oxide and peroxynitrite are also involved in the neurotoxic effect of oxaliplatin and that rutin and quercetin can inhibit their effect in the spinal cord. We also observed the preservation of dorsal horn structure using histopathological analyses. Conclusions Oxaliplatin induced painful peripheral neuropathy in mice, an effect that was prevented by rutin and quercetin. The mechanism of action of oxaliplatin appears to be, at least, partially oxidative stress-induced damage in dorsal horn neurons, with the involvement of lipid peroxidation and protein nitrosylation.