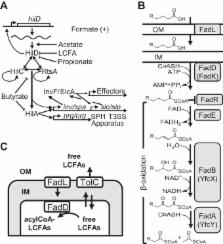 Salmonella enterica serovar Typhimurium uses the Salmonella pathogenicity island 1 (SPI1) type III secretion system (T3SS) to induce inflammatory diarrhea and bacterial uptake into intestinal epithelial cells. The expression of hilA, encoding the transcriptional activator of the T3SS structural genes, is directly controlled by three AraC-like regulators, HilD, HilC, and RtsA, each of which can activate hilD, hilC, rtsA, and hilA genes, forming a complex feed-forward regulatory loop. Expression of the SPI1 genes is tightly controlled by numerous regulatory inputs to ensure proper timing in production of the T3SS apparatus. Loss of FadD, an acyl coenzyme A (acyl-CoA) synthetase required for degradation of long-chain fatty acids (LCFAs), was known to decrease hilA expression. We show that free external LCFAs repress expression of hilA independently of FadD and the LCFA degradation pathway. Genetic and biochemical evidence suggests that LCFAs act directly to block primarily HilD activity. Further analyses show that in the absence of FadD, hilA expression is downregulated due to endogenous production of free LCFAs, which are excreted into the culture medium via TolC and then transported back into the bacterial cell via FadL. A fadL mutant is more virulent than the wild-type strain in mouse oral competition assays independently of LCFA degradation, showing that, in the host, dietary LCFAs serve as a signal for proper regulation of SPI1 expression, rather than an energy source.

To cause disease, Salmonella must respond to diverse environmental cues to express its invasion machinery at the appropriate location in the host intestine. We show that host intestinal free long-chain fatty acids (LCFAs) affect Salmonella invasion by reducing expression of the SPI1 type III secretion system, acting primarily via the AraC-like activator HilD. Degradation of LCFAs is not required for this regulation, showing that free LCFAs serve as a cue to proper intestinal localization to invade host epithelial cells and not as a nutrient source.

Gene disruption in Escherichia coli: TcR and KmR cassettes with the option of Flp-catalyzed excision of the antibiotic-resistance determinant.

W Wackernagel,  P Cherepanov (1995)
Two cassettes with tetracycline-resistance (TcR) and kanamycin-resistance (KmR) determinants have been developed for the construction of insertion and deletion mutants of cloned genes in Escherichia coli. In both cassettes, the resistance determinants are flanked by the short direct repeats (FRT sites) required for site-specific recombination mediated by the yeast Flp recombinase. In addition, a plasmid with temperature-sensitive replication for temporal production of the Flp enzyme in E. coli has been constructed. After a gene disruption or deletion mutation is constructed in vitro by insertion of one of the cassettes into a given gene, the mutated gene is transferred to the E. coli chromosome by homologous recombination and selection for the antibiotic resistance provided by the cassette. If desired, the resistance determinant can subsequently be removed from the chromosome in vivo by Flp action, leaving behind a short nucleotide sequence with one FRT site and with no polar effect on downstream genes. This system was applied in the construction of an E. coli endA deletion mutation which can be transduced by P1 to the genetic background of interest using TcR as a marker. The transductant can then be freed of the TcR if required.

J Galán (2000)
The bacterial pathogen Salmonella enterica has evolved a very sophisticated functional interface with its vertebrate hosts. At the center of this interface is a specialized organelle, the type III secretion system, that directs the translocation of bacterial proteins into the host cell. Salmonella spp. encode two such systems that deliver a remarkable array of bacterial proteins capable of modulating a variety of cellular functions, including actin cytoskeleton dynamics, nuclear responses, and endocytic trafficking. Many of these bacterial proteins operate by faithful mimicry of host proteins, in some cases representing the result of extensive molecular tinkering and convergent evolution. The coordinated action of these type III secreted proteins secures the replication and survival of the bacteria avoiding overt damage to the host. The study of this remarkable pathogen is not only illuminating general paradigms in microbial pathogenesis but is also providing valuable insight into host cell functions.

S Falkow,  BD Jones,  N Ghori … (1994)
Salmonella species are known to initiate infection of mammalian hosts by penetrating the intestinal epithelium of the small bowel. These bacteria preferentially interact with Peyer's patches which are collections of lymphoid follicles making up the gut-associated lymphoid tissue. We infected murine ligated intestinal loops with invasive and noninvasive Salmonella typhimurium strains for 30, 60, 120, and 180 min and examined the infected tissue by transmission electron microscopy. Within 30 min, we found that invasive S. typhimurium exclusively entered M cells found within the follicle-associated epithelium (FAE) of the Peyer's patches. Initially, interactions between invasive bacteria and enterocytes adjacent to the M cells were not found. Invasion of M cells was associated with the ability of the bacteria to invade tissue culture cells. S. typhimurium mutants, which were noninvasive for tissue culture cells, could not be found in ligated loops associated with M cells or enterocytes after incubations of 30, 60, 120, or 180 min. At 60 min, internalized invasive S. typhimurium were cytotoxic for the M cells. Destruction of an M cell formed a gap in the FAE which allowed organisms to invade enterocytes adjacent to the dead cell. Later in the infection process (120 and 180 min), the presence of bacteria beneath the FAE correlated with changes in the cytoarchitecture of the lymphoid follicle. In addition, replicating Salmonella began to enter both the apical and basolateral surfaces of enterocytes adjacent to infected M cells.