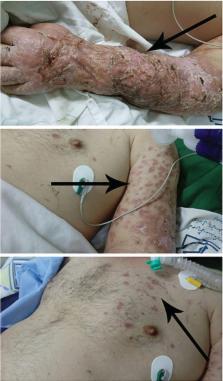 Leishmaniasis is a worldwide tropical infectious disease caused by different species of intracellular protozoa parasites of the genus Leishmania . Herein, we report a 78-year-old man with unusual diffuse cutaneous leishmaniasis (DCL) who had a history of opium abuse and chronic obstructive pulmonary disease (COPD). He had multiple papular, crusted and severely ulcerated lesions extended to his arm and chest. Direct smears and skin punch biopsy of the lesions were suggestive of leishmaniasis. Parasite DNA was amplified from ulcers, and identified as Leishmania major by PCR-RFLP, confirmed by sequencing analyses. The aim of the current study was to bring to attention this atypical form of disease in CL endemic countries. Thus, this is the first case of DCL in an opium abuser with COPD due to L. major in Northeastern Iran indicating that atypical and extensive forms of CL (DCL) owing to L. major are increasing in Iran.

Jack M Risdahl,  Kristen V Khanna,  Phillip Peterson … (1998)
This review on the effects of opiate use on infectious diseases discusses the complete spectrum of infections in the opiate user, including those of the lung, the GI tract, the skin, the skeletal system, and the CNS. There is both increased prevalence and increased severity of bacterial and viral infections in injection drug users with the outcome of increased morbidity and mortality. The experimental administration of opiates has lead to a greater understanding of the effects on susceptibility to and progression of infectious diseases. Animal models of opiate dependence and infection are reviewed with specific attention to cases in which the opiate-mediated effects are harmful and in which cases they are beneficial.

Yoshihisa Hashiguchi,  Eduardo L. Gomez,  Hirotomo Kato … (2016)
Background In Ecuador, cutaneous leishmaniasis (CL) is prevalent countrywide, but only one case of diffuse-CL and two cases of disseminated-CL were experienced during our research activities more than 30 years from 1982 to date. These three patients suffered from multiple lesions distributed at a wide range of the body surface, revealing difficulty to clinically differentiate each other. Methods There is a considerable confusion of the use and/or differentiation of the terminologies (terms) between the two disease forms, diffuse-CL and disseminated-CL. One of the aims of the present study is to clarify the difference between the two disease forms, mainly based on the cases experienced in Ecuador. Results The disseminated-CL case newly reported here was clinically very similar to the diffuse-CL case, but the former showed the following marked differences from the latter: (1) the organisms isolated were identified as the parasites of Leishmania (Viannia) guyanensis/panamensis, which are also known as the causative agents of disseminated-CL in different endemic countries of the New World; (2) the patient was sensitive against antimonials; and (3) mucosal involvement was observed, which is never observed in diffuse-CL. Conclusions In the text, three clinical cases, one diffuse-CL and two disseminated-CL, were presented. Furthermore, a bibliographic comparison of the features between the two disease forms was made, and a brief comment was also given.

Homa Hajjaran,  Mehdi Mohebali,  Behnaz AKHOUNDI … (2013)
Visceral leishmaniasis (VL) is endemic in Northwest and southern Iran. Reports of cutaneous leishmaniasis (CL) in Northwest areas are rare, and its etiological agents are unknown. In the current study, we report six CL and two post kala-azar dermal leishmaniasis (PKDL) cases caused by Leishmania infantum from endemic areas of VL in the Northwest. Smears were made from skin lesions of 30 suspected patients in 2002-2011, and CL was determined by microscopy or culture. Leishmania spp. were identified by nested-PCR assay. The disease was confirmed in 20 out of 30 (66%) suspected patients by parasitological examinations. L. infantum was identified in eight and Leishmania major in 12 CL cases by nested-PCR. Cutaneous leishmaniasis patients infected with L. major had the history of travel to CL endemic areas. L. infantum antibodies were detected by direct agglutination test (DAT) at titers of 1:3200 in two cases with history of VL. Results of this study indicated that L. infantum is a causative agent of CL as well as PKDL in the VL endemic areas.

These authors (AB and SS) contributed equally to this work

The current case report was approved by the local Ethics Committee of North Khorasan University of Medical Sciences, Bojnurd, Iran and a written consent was obtained from the patient.

We declare that we have no conflict of interest in relation to this work.