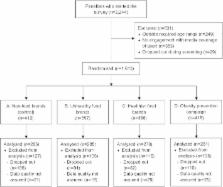 A between-subjects web-based experiment was conducted, consisting of four sponsorship conditions (A through D) featuring three product categories within each condition. Australian adults ( N = 1132) aged 18–24 years were recruited via a national online panel. Participants viewed promotional videos and news stories about an upcoming international, multi-sport event (with sponsor content edited to reflect each condition), completed a distractor task, and then answered questions assessing the response variables. Regression analyses were conducted to test for differences by sponsorship condition on the respective outcome measures.

The effect of experimental presentation of thin media images on body satisfaction: A meta-analytic review

Widespread reward-system activation in obese women in response to pictures of high-calorie foods.