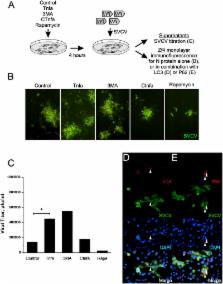 TNFα is a pleiotropic pro-inflammatory cytokine with a key role in the activation of the immune system to fight viral infections. Despite its antiviral role, a few viruses might utilize the host produced TNFα to their benefit. Some recent reports have shown that anti-TNFα therapies could be utilized to treat certain viral infections. However, the underlying mechanisms by which TNFα can favor virus replication have not been identified. Here, a rhabdoviral infection model in zebrafish allowed us to identify the mechanism of action by which Tnfa has a deleterious role for the host to combat certain viral infections. Our results demonstrate that Tnfa signals through its receptor Tnfr2 to enhance viral replication. Mechanistically, Tnfa does not affect viral adhesion and delivery from endosomes to the cytosol. In addition, the host interferon response was also unaffected by Tnfa levels. However, Tnfa blocks the host autophagic response, which is required for viral clearance. This mechanism of action provides new therapeutic targets for the treatment of SVCV-infected fish, and advances our understanding of the previously enigmatic deleterious role of TNFα in certain viral infections.

Tumor necrosis factor alpha (TNFα) is one of the main pro-inflammatory cytokines produced in response to a broad type of infections [ 1]. Although TNFα has a crucial role in protecting the host organism from pathogens, its deregulation can promote susceptibility to pathogens by impairing pathogen clearance and, ultimately, promoting maintenance of infection and death. In addition, some viruses might utilize the host produced TNFα to their benefit. Thus, anti-TNFα therapies could be utilized to treat certain viral infections. However, the underlying mechanisms by which TNFα can favor certain virus replication have not been identified. Here, we have used a viral infection model in zebrafish to identify the mechanism of action by which TNFα has a deleterious role for the host to combat certain viral infections. Our results demonstrate that Tnfa does not affect viral ability to infect host cells or to antagonize the main host antiviral pathway, namely the interferon pathway. However, Tnfa impairs viral clearance by blocking the host autophagy response, which is usually used by host cells to degrade unnecessary or dysfunctional cellular components, and that we found to be critical to eliminate intracellular viral particles. This mechanism of action provides new therapeutic targets for the treatment of SVCV-infected fish in aquaculture and probably to other viral infection affecting cattle industry and human.

T. J. Kim,  S. Gupta,  Bharat B. Aggarwal (2012)
Although activity that induced tumor regression was observed and termed tumor necrosis factor (TNF) as early as the 1960s, the true identity of TNF was not clear until 1984, when Aggarwal and coworkers reported, for the first time, the isolation of 2 cytotoxic factors: one, derived from macrophages (molecular mass 17 kDa), was named TNF, and the second, derived from lymphocytes (20 kDa), was named lymphotoxin. Because the 2 cytotoxic factors exhibited 50% amino acid sequence homology and bound to the same receptor, they came to be called TNF-α and TNF-β. Identification of the protein sequences led to cloning of their cDNA. Based on sequence homology to TNF-α, now a total of 19 members of the TNF superfamily have been identified, along with 29 interacting receptors, and several molecules that interact with the cytoplasmic domain of these receptors. The roles of the TNF superfamily in inflammation, apoptosis, proliferation, invasion, angiogenesis, metastasis, and morphogenesis have been documented. Their roles in immunologic, cardiovascular, neurologic, pulmonary, and metabolic diseases are becoming apparent. TNF superfamily members are active targets for drug development, as indicated by the recent approval and expanding market of TNF blockers used to treat rheumatoid arthritis, psoriasis, Crohns disease, and osteoporosis, with a total market of more than US $20 billion. As we learn more about this family, more therapeutics will probably emerge. In this review, we summarize the initial discovery of TNF-α, and the insights gained regarding the roles of this molecule and its related family members in normal physiology and disease.

Autophagy is an essential component of Drosophila immunity against vesicular stomatitis virus.

Spencer S. Shelly,  Nina I. Lukinova,  Shelly Bambina … (2009)
Intrinsic innate immune mechanisms are the first line of defense against pathogens and exist to control infection autonomously in infected cells. Here, we showed that autophagy, an intrinsic mechanism that can degrade cytoplasmic components, played a direct antiviral role against the mammalian viral pathogen vesicular stomatitis virus (VSV) in the model organism Drosophila. We found that the surface glycoprotein, VSV-G, was likely the pathogen-associated molecular pattern (PAMP) that initiated this cell-autonomous response. Once activated, autophagy decreased viral replication, and repression of autophagy led to increased viral replication and pathogenesis in cells and animals. Lastly, we showed that the antiviral response was controlled by the phosphatidylinositol 3-kinase (PI3K)-Akt-signaling pathway, which normally regulates autophagy in response to nutrient availability. Altogether, these data uncover an intrinsic antiviral program that links viral recognition to the evolutionarily conserved nutrient-signaling and autophagy pathways.

Francoise Besançon,  Manuela Amelotti,  Gérard Pierron … (2006)
Activation of NF-kappaB and autophagy are two processes involved in the regulation of cell death, but the possible cross-talk between these two signaling pathways is largely unknown. Here, we show that NF-kappaB activation mediates repression of autophagy in tumor necrosis factor-alpha (TNFalpha)-treated Ewing sarcoma cells. This repression is associated with an NF-kappaB-dependent activation of the autophagy inhibitor mTOR. In contrast, in cells lacking NF-kappaB activation, TNFalpha treatment up-regulates the expression of the autophagy-promoting protein Beclin 1 and subsequently induces the accumulation of autophagic vacuoles. Both of these responses are dependent on reactive oxygen species (ROS) production and can be mimicked in NF-kappaB-competent cells by the addition of H2O2. Small interfering RNA-mediated knockdown of beclin 1 and atg7 expression, two autophagy-related genes, reduced TNFalpha- and reactive oxygen species-induced apoptosis in cells lacking NF-kappaB activation and in NF-kappaB-competent cells, respectively. These findings demonstrate that autophagy may amplify apoptosis when associated with a death signaling pathway. They are also evidence that inhibition of autophagy is a novel mechanism of the antiapoptotic function of NF-kappaB activation. We suggest that stimulation of autophagy may be a potential way bypassing the resistance of cancer cells to anti-cancer agents that activate NF-kappaB.

‡ These two authors have cosupervised this study.