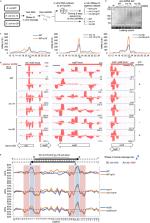 Antisense transcription is widespread in bacteria. By base pairing with overlapping sense RNAs, antisense RNAs (asRNA) can form double-stranded RNAs (dsRNA), which are cleaved by RNase III, a dsRNA endoribonuclease. The ectopic expression of plant Tombusvirus p19 in Escherichia coli stabilizes ∼21-nucleotide (nt) dsRNA RNase III decay intermediates, which enabled us to characterize otherwise highly unstable asRNA by deep sequencing of p19-captured dsRNA. RNase III-produced small dsRNA were formed at most bacterial genes in the bacterial genome and in a plasmid.

Antisense transcription is widespread in bacteria. By base pairing with overlapping sense RNAs, antisense RNAs (asRNA) can form double-stranded RNAs (dsRNA), which are cleaved by RNase III, a dsRNA endoribonuclease. The ectopic expression of plant Tombusvirus p19 in Escherichia coli stabilizes ∼21-nucleotide (nt) dsRNA RNase III decay intermediates, which enabled us to characterize otherwise highly unstable asRNA by deep sequencing of p19-captured dsRNA. RNase III-produced small dsRNA were formed at most bacterial genes in the bacterial genome and in a plasmid. We classified the types of asRNA in genomic clusters producing the most abundant p19-captured dsRNA and confirmed RNase III regulation of asRNA and sense RNA decay at three type I toxin-antitoxin loci and at a coding gene, rsd. Furthermore, we provide potential evidence for the RNase III-dependent regulation of CspD protein by asRNA. The analysis of p19-captured dsRNA revealed an RNase III sequence preference for AU-rich sequences 3 nucleotides on either side of the cleavage sites and for GC-rich sequences in the 2-nt overhangs. Unexpectedly, GC-rich sequences were enriched in the middle section of p19-captured dsRNA, suggesting some unexpected sequence bias in p19 protein binding. Nonetheless, the ectopic expression of p19 is a sensitive method for identifying antisense transcripts and RNase III cleavage sites in dsRNA formed by overlapping sense and antisense transcripts in bacteria.

The Proteomics Identifications (PRIDE) database and associated tools: status in 2013

Juan Antonio Vizcaíno,  Richard Côté,  Attila Csordas … (2012)
The PRoteomics IDEntifications (PRIDE, http://www.ebi.ac.uk/pride) database at the European Bioinformatics Institute is one of the most prominent data repositories of mass spectrometry (MS)-based proteomics data. Here, we summarize recent developments in the PRIDE database and related tools. First, we provide up-to-date statistics in data content, splitting the figures by groups of organisms and species, including peptide and protein identifications, and post-translational modifications. We then describe the tools that are part of the PRIDE submission pipeline, especially the recently developed PRIDE Converter 2 (new submission tool) and PRIDE Inspector (visualization and analysis tool). We also give an update about the integration of PRIDE with other MS proteomics resources in the context of the ProteomeXchange consortium. Finally, we briefly review the quality control efforts that are ongoing at present and outline our future plans.

Sarah Waters,  Gisela Storz (2009)
Bacteria possess numerous and diverse means of gene regulation using RNA molecules, including mRNA leaders that affect expression in cis, small RNAs that bind to proteins or base pair with target RNAs, and CRISPR RNAs that inhibit the uptake of foreign DNA. Although examples of RNA regulators have been known for decades in bacteria, we are only now coming to a full appreciation of their importance and prevalence. Here, we review the known mechanisms and roles of regulatory RNAs, highlight emerging themes, and discuss remaining questions.

cis-antisense RNA, another level of gene regulation in bacteria.

Wolfgang R Hess,  Jens Georg (2011)
A substantial amount of antisense transcription is a hallmark of gene expression in eukaryotes. However, antisense transcription was first demonstrated in bacteria almost 50 years ago. The transcriptomes of bacteria as different as Helicobacter pylori, Bacillus subtilis, Escherichia coli, Synechocystis sp. strain PCC6803, Mycoplasma pneumoniae, Sinorhizobium meliloti, Geobacter sulfurreducens, Vibrio cholerae, Chlamydia trachomatis, Pseudomonas syringae, and Staphylococcus aureus have now been reported to contain antisense RNA (asRNA) transcripts for a high percentage of genes. Bacterial asRNAs share functional similarities with trans-acting regulatory RNAs, but in addition, they use their own distinct mechanisms. Among their confirmed functional roles are transcription termination, codegradation, control of translation, transcriptional interference, and enhanced stability of their respective target transcripts. Here, we review recent publications indicating that asRNAs occur as frequently in simple unicellular bacteria as they do in higher organisms, and we provide a comprehensive overview of the experimentally confirmed characteristics of asRNA actions and intimately linked quantitative aspects. Emerging functional data suggest that asRNAs in bacteria mediate a plethora of effects and are involved in far more processes than were previously anticipated. Thus, the functional impact of asRNAs should be considered when developing new strategies against pathogenic bacteria and when optimizing bacterial strains for biotechnology.