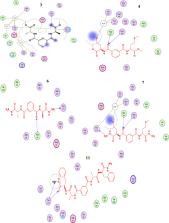 Multidrug-resistant microbial strains have arisen against all antibiotics in clinical use. Infections caused by these bacteria threaten global public health and are associated with high mortality rates.

The main backbone structure for the novel synthesized linear peptide is Nα-1, 3-benzenedicarbonyl-bis-(Amino acids)-X, ( 3–11). A computational docking study against DNA gyrase was performed to formulate a mode of action of the small compounds as antimicrobial agents.

The peptide-bearing methionine-ester ( 4) exhibited potent antimicrobial activity compared to the other synthesized compounds, while, peptide ( 8), which had methionine-hydrazide fragment was the most potent as antifungal agent against Aspergillus niger with 100% inhibition percent. Compounds ( 6 and 7) showed the highest potency against breast human tumor cell line “MCF-7” with 95.1% and 79.8% of cell inhibition, respectively. The nine compounds possessed weak to moderate antiproliferative effect over colon tumor cell line. The docking results suggest good fitting through different hydrogen bond interactions with the protein residues. In silico ADMET study also evaluated and suggested that these compounds had promising oral bioavailability features.

The tested compounds need further modification to have significant antimicrobial and antitumor efficacy compared to the reference drugs.

Tim R. Mosmann (1983)
A tetrazolium salt has been used to develop a quantitative colorimetric assay for mammalian cell survival and proliferation. The assay detects living, but not dead cells and the signal generated is dependent on the degree of activation of the cells. This method can therefore be used to measure cytotoxicity, proliferation or activation. The results can be read on a multiwell scanning spectrophotometer (ELISA reader) and show a high degree of precision. No washing steps are used in the assay. The main advantages of the colorimetric assay are its rapidity and precision, and the lack of any radioisotope. We have used the assay to measure proliferative lymphokines, mitogen stimulations and complement-mediated lysis.

Antibacterial activity and mechanism of action of the silver ion in Staphylococcus aureus and Escherichia coli.

Edward Koo,  Christopher Y. Park,  Ivana K. Kim … (2008)
The antibacterial effect and mechanism of action of a silver ion solution that was electrically generated were investigated for Staphylococcus aureus and Escherichia coli by analyzing the growth, morphology, and ultrastructure of the bacterial cells following treatment with the silver ion solution. Bacteria were exposed to the silver ion solution for various lengths of time, and the antibacterial effect of the solution was tested using the conventional plate count method and flow cytometric (FC) analysis. Reductions of more than 5 log(10) CFU/ml of both S. aureus and E. coli bacteria were confirmed after 90 min of treatment with the silver ion solution. Significant reduction of S. aureus and E. coli cells was also observed by FC analysis; however, the reduction rate determined by FC analysis was less than that determined by the conventional plate count method. These differences may be attributed to the presence of bacteria in an active but nonculturable (ABNC) state after treatment with the silver ion solution. Transmission electron microscopy showed considerable changes in the bacterial cell membranes upon silver ion treatment, which might be the cause or consequence of cell death. In conclusion, the results of the present study suggest that silver ions may cause S. aureus and E. coli bacteria to reach an ABNC state and eventually die.

C Lipinski (2004)
Citations in CAS SciFinder to the rule-of-five (RO5) publication will exceed 1000 by year-end 2004. Trends in the RO5 literature explosion that can be discerned are the further definitions of drug-like. This topic is explored in terms of drug-like physicochemical features, drug-like structural features, a comparison of drug-like and non-drug-like in drug discovery and a discussion of how drug-like features relate to clinical success. Physicochemical features of CNS drugs and features related to CNS blood-brain transporter affinity are briefly reviewed. Recent literature on features of non-oral drugs is reviewed and how features of lead-like compounds differ from those of drug-like compounds is discussed. Most recently, partly driven by NIH roadmap initiatives, considerations have arisen as to what tool-like means in the search for chemical tools to probe biology space. All these topics frame the scope of this short review/perspective.: © 2004 Elsevier Ltd . All rights reserved.