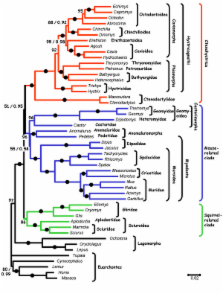 Rodentia is the most diverse order of placental mammals, with extant rodent species representing about half of all placental diversity. In spite of many morphological and molecular studies, the family-level relationships among rodents and the location of the rodent root are still debated. Although various datasets have already been analyzed to solve rodent phylogeny at the family level, these are difficult to combine because they involve different taxa and genes.

We present here the largest protein-coding dataset used to study rodent relationships. It comprises six nuclear genes, 41 rodent species, and eight outgroups. Our phylogenetic reconstructions strongly support the division of Rodentia into three clades: (1) a "squirrel-related clade", (2) a "mouse-related clade", and (3) Ctenohystrica. Almost all evolutionary relationships within these clades are also highly supported. The primary remaining uncertainty is the position of the root. The application of various models and techniques aimed to remove non-phylogenetic signal was unable to solve the basal rodent trifurcation.

Sequencing and analyzing a large sequence dataset enabled us to resolve most of the evolutionary relationships among Rodentia. Our findings suggest that the uncertainty regarding the position of the rodent root reflects the rapid rodent radiation that occurred in the Paleocene rather than the presence of conflicting phylogenetic and non-phylogenetic signals in the dataset.

F. Abascal, R Zardoya, D Posada (2005)
Using an appropriate model of amino acid replacement is very important for the study of protein evolution and phylogenetic inference. We have built a tool for the selection of the best-fit model of evolution, among a set of candidate models, for a given protein sequence alignment. ProtTest is available under the GNU license from http://darwin.uvigo.es

Shira N Goldman, Q. Z. Yang, Gloria A. Pedersen … (2000)
Comparison of relative fixation rates of synonymous (silent) and nonsynonymous (amino acid-altering) mutations provides a means for understanding the mechanisms of molecular sequence evolution. The nonsynonymous/synonymous rate ratio (omega = d(N)d(S)) is an important indicator of selective pressure at the protein level, with omega = 1 meaning neutral mutations, omega 1 diversifying positive selection. Amino acid sites in a protein are expected to be under different selective pressures and have different underlying omega ratios. We develop models that account for heterogeneous omega ratios among amino acid sites and apply them to phylogenetic analyses of protein-coding DNA sequences. These models are useful for testing for adaptive molecular evolution and identifying amino acid sites under diversifying selection. Ten data sets of genes from nuclear, mitochondrial, and viral genomes are analyzed to estimate the distributions of omega among sites. In all data sets analyzed, the selective pressure indicated by the omega ratio is found to be highly heterogeneous among sites. Previously unsuspected Darwinian selection is detected in several genes in which the average omega ratio across sites is 1. Genes undergoing positive selection include the beta-globin gene from vertebrates, mitochondrial protein-coding genes from hominoids, the hemagglutinin (HA) gene from human influenza virus A, and HIV-1 env, vif, and pol genes. Tests for the presence of positively selected sites and their subsequent identification appear quite robust to the specific distributional form assumed for omega and can be achieved using any of several models we implement. However, we encountered difficulties in estimating the precise distribution of omega among sites from real data sets.

W Murphy, E Eizirik, S O'Brien … (2001)
Molecular phylogenetic studies have resolved placental mammals into four major groups, but have not established the full hierarchy of interordinal relationships, including the position of the root. The latter is critical for understanding the early biogeographic history of placentals. We investigated placental phylogeny using Bayesian and maximum-likelihood methods and a 16.4-kilobase molecular data set. Interordinal relationships are almost entirely resolved. The basal split is between Afrotheria and other placentals, at about 103 million years, and may be accounted for by the separation of South America and Africa in the Cretaceous. Crown-group Eutheria may have their most recent common ancestry in the Southern Hemisphere (Gondwana).