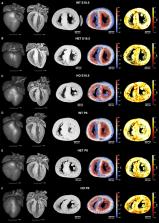 Myoarchitectural disarray – the multiscalar disorganisation of myocytes, is a recognised histopathological hallmark of adult human hypertrophic cardiomyopathy (HCM). It occurs before the establishment of left ventricular hypertrophy (LVH) but its early origins and evolution around the time of birth are unknown. Our aim is to investigate whether myoarchitectural abnormalities in HCM are present in the fetal heart. We used wild‐type, heterozygous and homozygous hearts ( n = 56) from a Mybpc3‐targeted knock‐out HCM mouse model and imaged the 3D micro‐structure by high‐resolution episcopic microscopy. We developed a novel structure tensor approach to extract, display and quantify myocyte orientation and its local angular uniformity by helical angle, angle of intrusion and myoarchitectural disarray index, respectively, immediately before and after birth. In wild‐type, we demonstrate uniformity of orientation of cardiomyocytes with smooth transitions of helical angle transmurally both before and after birth but with traces of disarray at the septal insertion points of the right ventricle. In comparison, heterozygous mice free of LVH, and homozygous mice showed not only loss of the normal linear helical angulation transmural profiles observed in wild‐type but also fewer circumferentially arranged myocytes at birth. Heterozygous and homozygous showed more disarray with a wider distribution than in wild‐type before birth. In heterozygous mice, disarray was seen in the anterior, septal and inferior walls irrespective of stage, whereas in homozygous mice it extended to the whole LV circumference including the lateral wall. In conclusion, myoarchitectural disarray is detectable in the fetal heart of an HCM mouse model before the development of LVH.

Etiology of Sudden Death in Sports: Insights From a United Kingdom Regional Registry.

P. Harris,  Marion L. Greaser,  Sean Powers … (2002)
Familial hypertrophic cardiomyopathy (FHC) is an inherited autosomal dominant disease caused by mutations in sarcomeric proteins. Among these, mutations that affect myosin binding protein-C (MyBP-C), an abundant component of the thick filaments, account for 20% to 30% of all mutations linked to FHC. However, the mechanisms by which MyBP-C mutations cause disease and the function of MyBP-C are not well understood. Therefore, to assess deficits due to elimination of MyBP-C, we used gene targeting to produce a knockout mouse that lacks MyBP-C in the heart. Knockout mice were produced by deletion of exons 3 to 10 from the endogenous cardiac (c) MyBP-C gene in murine embryonic stem (ES) cells and subsequent breeding of chimeric founder mice to obtain mice heterozygous (+/-) and homozygous (-/-) for the knockout allele. Wild-type (+/+), cMyBP-C(+/-), and cMyBP-C(-/-) mice were born in accordance with Mendelian inheritance ratios, survived into adulthood, and were fertile. Western blot analyses confirmed that cMyBP-C was absent in hearts of homozygous knockout mice. Whereas cMyBP-C(+/-) mice were indistinguishable from wild-type littermates, cMyBP-C(-/-) mice exhibited significant cardiac hypertrophy. Cardiac function, assessed using 2-dimensionally guided M-mode echocardiography, showed significantly depressed indices of diastolic and systolic function only in cMyBP-C(-/-) mice. Ca2+ sensitivity of tension, measured in single skinned myocytes, was reduced in cMyBP-C(-/-) but not cMyBP-C(+/-) mice. These results establish that cMyBP-C is not essential for cardiac development but that the absence of cMyBP-C results in profound cardiac hypertrophy and impaired contractile function.

High-resolution episcopic microscopy: a rapid technique for high detailed 3D analysis of gene activity in the context of tissue architecture and morphology.

W Weninger,  Diego Rasskin-Gutman,  Takaaki Matsui … (2006)
We describe a new methodology for rapid 2D and 3D computer analysis and visualisation of gene expression and gene product pattern in the context of anatomy and tissue architecture. It is based on episcopic imaging of embryos and tissue samples, as they are physically sectioned, thereby producing inherently aligned digital image series and volume data sets, which immediately permit the generation of 3D computer representations. The technique uses resin as embedding medium, eosin for unspecific tissue staining, and colour reactions (beta-galactosidase/Xgal or BCIP/NBT) for specific labelling of gene activity and mRNA pattern. We tested the potential of the method for producing high-resolution volume data sets of adult human and porcine tissue samples and of specifically and unspecifically stained mouse, chick, quail, frog, and zebrafish embryos. The quality of the episcopic images resembles the quality of digital images of true histological sections with respect to resolution and contrast. Specifically labelled structures can be extracted using simple thresholding algorithms. Thus, the method is capable of quickly and precisely detecting molecular signals simultaneously with anatomical details and tissue architecture. It has no tissue restrictions and can be applied for analysis of human tissue samples as well as for analysis of all developmental stages of embryos of a wide variety of biomedically relevant species.