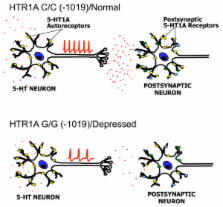 The serotonin-1A (5-HT1A) receptor is among the most abundant and widely distributed 5-HT receptors in the brain, but is also expressed on serotonin neurons as an autoreceptor where it plays a critical role in regulating the activity of the entire serotonin system. Over-expression of the 5-HT1A autoreceptor has been implicated in reducing serotonergic neurotransmission, and is associated with major depression and suicide. Extensive characterization of the transcriptional regulation of the 5-HT1A gene (HTR1A) using cell culture systems has revealed a GC-rich "housekeeping" promoter that non-selectively drives its expression; this is flanked by a series of upstream repressor elements for REST, Freud-1/CC2D1A and Freud-2/CC2D1B factors that not only restrict its expression to neurons, but may also regulate the level of expression of 5-HT1A receptors in various subsets of neurons, including serotonergic neurons. A separate set of allele-specific factors, including Deaf1, Hes1 and Hes5 repress at the HTR1A C(-1019)G (rs6295) polymorphism in serotonergic neurons in culture, as well as in vivo. Pet1, an obligatory enhancer for serotonergic differentiation, has been identified as a potent activator of 5-HT1A autoreceptor expression. Taken together, these results highlight an integrated regulation of 5-HT1A autoreceptors that differs in several aspects from regulation of post-synaptic 5-HT1A receptors, and could be selectively targeted to enhance serotonergic neurotransmission.

Requirement of hippocampal neurogenesis for the behavioral effects of antidepressants.

Dáithí Murray,  D. López (1997)
Prevention and control of disease and injury require information about the leading medical causes of illness and exposures or risk factors. The assessment of the public-health importance of these has been hampered by the lack of common methods to investigate the overall, worldwide burden. The Global Burden of Disease Study (GBD) provides a standardised approach to epidemiological assessment and uses a standard unit, the disability-adjusted life year (DALY), to aid comparisons. DALYs for each age-sex group in each GBD region for 107 disorders were calculated, based on the estimates of mortality by cause, incidence, average age of onset, duration, and disability severity. Estimates of the burden and prevalence of exposure in different regions of disorders attributable to malnutrition, poor water supply, sanitation and personal and domestic hygiene, unsafe sex, tobacco use, alcohol, occupation, hypertension, physical inactivity, use of illicit drugs, and air pollution were developed. Developed regions account for 11.6% of the worldwide burden from all causes of death and disability, and account for 90.2% of health expenditure worldwide. Communicable, maternal, perinatal, and nutritional disorders explain 43.9%; non-communicable causes 40.9%; injuries 15.1%; malignant neoplasms 5.1%; neuropsychiatric conditions 10.5%; and cardiovascular conditions 9.7% of DALYs worldwide. The ten leading specific causes of global DALYs are, in descending order, lower respiratory infections, diarrhoeal diseases, perinatal disorders, unipolar major depression, ischaemic heart disease, cerebrovascular disease, tuberculosis, measles, road-traffic accidents, and congenital anomalies. 15.9% of DALYs worldwide are attributable to childhood malnutrition and 6.8% to poor water, and sanitation and personal and domestic hygiene. The three leading contributors to the burden of disease are communicable and perinatal disorders affecting children. The substantial burdens of neuropsychiatric disorders and injuries are under-recognised. The epidemiological transition in terms of DALYs has progressed substantially in China, Latin America and the Caribbean, other Asia and islands, and the middle eastern crescent. If the burdens of disability and death are taken into account, our list differs substantially from other lists of the leading causes of death. DALYs provide a common metric to aid meaningful comparison of the burden of risk factors, diseases, and injuries.