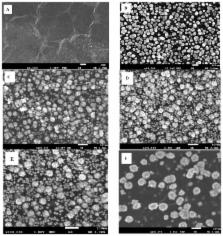 In this paper, AuPt bimetallic nanoparticles-graphene nanocomposites were obtained by electrochemical co-reduction of graphene oxide (GO), HAuCl 4 and H 2PtCl 6. The as-prepared AuPt bimetallic nanoparticles-graphene nanocomposites were characterized by scanning electron microscopy (SEM), electrochemical impedance spectroscopy (EIS) and other electrochemical methods. The morphology and composition of the nanocomposite could be easily controlled by adjusting the HAuCl 4/H 2PtCl 6 concentration ratio. The electrochemical experiments showed that when the concentration ratio of HAuCl 4/H 2PtCl 6 was 1:1, the obtained AuPt bimetallic nanoparticles-graphene nanocomposite (denoted as Au1Pt1NPs-GR) possessed the highest electrocatalytic activity toward dopamine (DA). As such, Au1Pt1NPs-GR nanocomposites were used to detect DA in the presence of ascorbic acid (AA) and uric acid (UA) using the differential pulse voltammetry (DPV) technique and on the modified electrode, there were three separate DPV oxidation peaks with the peak potential separations of 177 mV, 130 mV and 307 mV for DA and AA, DA and UA, AA and UA, respectively. The linear range of the constructed DA sensor was from 1.6 μM to 39.7 μM with a detection limit of 0.1 μM ( S/N = 3). The obtained DA sensor with good stability, high reproducibility and excellent selectivity made it possible to detect DA in human urine samples.

A green approach to the synthesis of graphene nanosheets.

Lin Guo,  Feng Wang,  XING XIA … (2009)
Graphene can be viewed as an individual atomic plane extracted from graphite, as unrolled single-walled carbon nanotube or as an extended flat fullerene molecule. In this paper, a facile approach to the synthesis of high quality graphene nanosheets in large scale through electrochemical reduction of exfoliated graphite oxide precursor at cathodic potentials (completely reduced potential: -1.5 V) is reported. This method is green and fast, and will not result in contamination of the reduced material. The electrochemically reduced graphene nanosheets have been carefully characterized by spectroscopic and electrochemical techniques in comparison to the chemically reduced graphene-based product. Particularly, FTIR spectra indicate that a variety of the oxygen-containing functional groups have been thoroughly removed from the graphite oxide plane via electrochemical reduction. The chemically converted materials are not expected to exhibit graphene's electronic properties because of residual defects. Indeed, the high quality graphene accelerates the electron transfer rate in dopamine electrochemistry (DeltaE(p) is as small as 44 mV which is much smaller than that on a glassy carbon electrode). This approach opens up the possibility for assembling graphene biocomposites for electrocatalysis and the construction of biosensors.

Real-time measurement of dopamine fluctuations after cocaine in the brain of behaving rats.

Khalid Khan,  Kate Wassum,  M Wightman … (2005)
Dopamine neurotransmission has been implicated in the modulation of many cognitive processes. Both rapid (phasic) and slower (tonic) changes in its extracellular concentration contribute to its complex actions. Fast in vivo electrochemical techniques can measure extracellular dopamine on a rapid time scale but without the selectivity afforded with slower techniques that use chemical separations. Cyclic voltammetry improves chemical resolution over other electrochemical methods, and it can resolve dopamine changes in the brains of behaving rodents over short epochs (<10 s). With this method, however, selective detection of slower dopamine changes is still elusive. Here we demonstrate that principal component regression of cyclic voltammetry data enables quantification of changes in dopamine and extracellular pH. Using this method, we show that cocaine modifies dopamine release in two ways: dopamine concentration transients increase in frequency and magnitude, whereas a gradual increase in steady-state dopamine concentration occurs over 90 s.

A facile approach to the synthesis of highly electroactive Pt nanoparticles on graphene as an anode catalyst for direct methanol fuel cells.