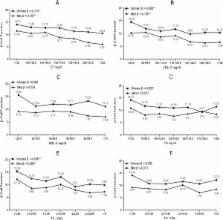 Dyslipidemia is present in people with diabetes as well as subjects with normal glucose tolerance (NGT). The purpose of this study was to investigate the relationship between lipid profiles and β cell function in Chinese individuals with NGT but without history of diabetes or prediabetes.

A total of 893 men and 1454 women aged 18–76 years living in Sichuan, China, who were not being treated with lipid-lowering drugs were enrolled in this study. Insulin sensitivity (IR) was evaluated using the homeostasis model assessment –IR (HOMA-IR), β-cell function was calculated by the following equation: ΔI30/ΔG30/ HOMA-IR (ΔI30/ΔG30: the ratio of incremental glucose and insulin 30 min after glucose intake). Multivariate linear regression analyses were performed to estimate the relationship between blood lipid and β cell function as standardized coefficients (β).

Dyslipidemia is associated with dysfunction of pancreatic β cells in subjects with NGT and this is particularly evident in people with elevated TC and LDL-C levels, especially males.

S Gunawardana,  Mark W Head,  David W Piston … (2007)
Type 2 diabetes is often accompanied by abnormal blood lipid and lipoprotein levels, but most studies on the link between hyperlipidemia and diabetes have focused on free fatty acids (FFAs). In this study, we examined the relationship between cholesterol and insulin secretion from pancreatic beta-cells that is independent of the effects of FFAs. Several methods were used to modulate cholesterol levels in intact islets and cultured beta-cells, including a recently developed mouse model that exhibits elevated cholesterol but normal FFA levels. Acute and metabolic alteration of cholesterol was done using pharmacological reagents. We found a direct link between elevated serum cholesterol and reduced insulin secretion, with normal secretion restored by cholesterol depletion. We further demonstrate that excess cholesterol inhibits secretion by downregulation of metabolism through increased neuronal nitric oxide synthase dimerization. This direct effect of cholesterol on beta-cell metabolism opens a novel set of mechanisms that may contribute to beta-cell dysfunction and the onset of diabetes in obese patients.