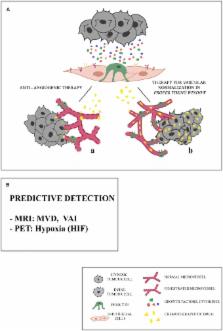 Primary solid tumors originate close to pre-existing tissue vasculature, initially growing along such tissue blood vessels, and this phenomenon is important for the metastatic potential which frequently occurs in highly vascularized tissues. Unfortunately, preclinic and clinic anti-angiogenic approaches have not been very successful, and multiple factors have been found to contribute to toxicity and tumor resistance. Moreover, tumors can highlight intrinsic or acquired resistances, or show adaptation to the VEGF-targeted therapies. Furthermore, different mechanisms of vascularization, activation of alternative signaling pathways, and increased tumor aggressiveness make this context even more complex. On the other hand, it has to be considered that the transitional restoration of normal, not fenestrated, microvessels allows the drug to reach the tumor and act with the maximum efficiency. However, these effects are time-limited and different, depending on the various types of cancer, and clearly define a specific “normalization window.” So, new horizons in the therapeutic approaches consist on the treatment of the tumor with pro- (instead of anti-) angiogenic therapies, which could strengthen a network of well-structured blood vessels that facilitate the transport of the drug.

Paclitaxel-carboplatin alone or with bevacizumab for non-small-cell lung cancer.

Joan H. Schiller,  Julie Brahmer,  Afshin Dowlati … (2007)
Bevacizumab, a monoclonal antibody against vascular endothelial growth factor, has been shown to benefit patients with a variety of cancers. Between July 2001 and April 2004, the Eastern Cooperative Oncology Group (ECOG) conducted a randomized study in which 878 patients with recurrent or advanced non-small-cell lung cancer (stage IIIB or IV) were assigned to chemotherapy with paclitaxel and carboplatin alone (444) or paclitaxel and carboplatin plus bevacizumab (434). Chemotherapy was administered every 3 weeks for six cycles, and bevacizumab was administered every 3 weeks until disease progression was evident or toxic effects were intolerable. Patients with squamous-cell tumors, brain metastases, clinically significant hemoptysis, or inadequate organ function or performance status (ECOG performance status, >1) were excluded. The primary end point was overall survival. The median survival was 12.3 months in the group assigned to chemotherapy plus bevacizumab, as compared with 10.3 months in the chemotherapy-alone group (hazard ratio for death, 0.79; P=0.003). The median progression-free survival in the two groups was 6.2 and 4.5 months, respectively (hazard ratio for disease progression, 0.66; P<0.001), with corresponding response rates of 35% and 15% (P<0.001). Rates of clinically significant bleeding were 4.4% and 0.7%, respectively (P<0.001). There were 15 treatment-related deaths in the chemotherapy-plus-bevacizumab group, including 5 from pulmonary hemorrhage. The addition of bevacizumab to paclitaxel plus carboplatin in the treatment of selected patients with non-small-cell lung cancer has a significant survival benefit with the risk of increased treatment-related deaths. (ClinicalTrials.gov number, NCT00021060.) 2006 Massachusetts Medical Society

Modes of resistance to anti-angiogenic therapy.

Gabriele Bergers,  Douglas Hanahan (2008)
Angiogenesis inhibitors targeting the vascular endothelial growth factor (VEGF) signalling pathways are affording demonstrable therapeutic efficacy in mouse models of cancer and in an increasing number of human cancers. However, in both preclinical and clinical settings, the benefits are at best transitory and are followed by a restoration of tumour growth and progression. Emerging data support a proposition that two modes of unconventional resistance underlie such results: evasive resistance, an adaptation to circumvent the specific angiogenic blockade; and intrinsic or pre-existing indifference. Multiple mechanisms can be invoked in different tumour contexts to manifest both evasive and intrinsic resistance, motivating assessment of their prevalence and importance and in turn the design of pharmacological strategies that confer enduring anti-angiogenic therapies.

A randomized trial of bevacizumab for newly diagnosed glioblastoma.

Mark Gilbert,  James Dignam,  Terri S Armstrong … (2014)
Concurrent treatment with temozolomide and radiotherapy followed by maintenance temozolomide is the standard of care for patients with newly diagnosed glioblastoma. Bevacizumab, a humanized monoclonal antibody against vascular endothelial growth factor A, is currently approved for recurrent glioblastoma. Whether the addition of bevacizumab would improve survival among patients with newly diagnosed glioblastoma is not known. In this randomized, double-blind, placebo-controlled trial, we treated adults who had centrally confirmed glioblastoma with radiotherapy (60 Gy) and daily temozolomide. Treatment with bevacizumab or placebo began during week 4 of radiotherapy and was continued for up to 12 cycles of maintenance chemotherapy. At disease progression, the assigned treatment was revealed, and bevacizumab therapy could be initiated or continued. The trial was designed to detect a 25% reduction in the risk of death and a 30% reduction in the risk of progression or death, the two coprimary end points, with the addition of bevacizumab. A total of 978 patients were registered, and 637 underwent randomization. There was no significant difference in the duration of overall survival between the bevacizumab group and the placebo group (median, 15.7 and 16.1 months, respectively; hazard ratio for death in the bevacizumab group, 1.13). Progression-free survival was longer in the bevacizumab group (10.7 months vs. 7.3 months; hazard ratio for progression or death, 0.79). There were modest increases in rates of hypertension, thromboembolic events, intestinal perforation, and neutropenia in the bevacizumab group. Over time, an increased symptom burden, a worse quality of life, and a decline in neurocognitive function were more frequent in the bevacizumab group. First-line use of bevacizumab did not improve overall survival in patients with newly diagnosed glioblastoma. Progression-free survival was prolonged but did not reach the prespecified improvement target. (Funded by the National Cancer Institute; ClinicalTrials.gov number, NCT00884741.).