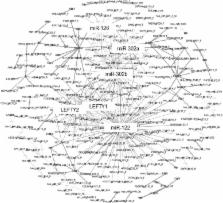 In analyses of individual datasets, differences were observed by tumor histology. Germinomas had higher expression of transcription factors maintaining stemness, while YSTs had higher expression of cytokines, endoderm and endothelial markers. We also observed differences in miRNA expression, with miR-371-5p, miR-122, miR-302a, miR-302d, and miR-373 showing elevated expression in one or more histologic subtypes. Using the MIC, we identified correlations across the data features, including six major hubs with higher expression in YST (LEFTY1, LEFTY2, miR302b, miR302a, miR 126, and miR 122) compared with other GCT.

While prognosis for GCTs is overall favorable, many patients experience resistance to chemotherapy, relapse and/or long term adverse health effects following treatment. Targeted therapies, based on integrated analyses of molecular tumor data such as that presented here, may provide a way to secure high cure rates while reducing unintended health consequences.

Gary K Geiss, Roger Bumgarner, Brian Birditt … (2008)
We describe a technology, the NanoString nCounter gene expression system, which captures and counts individual mRNA transcripts. Advantages over existing platforms include direct measurement of mRNA expression levels without enzymatic reactions or bias, sensitivity coupled with high multiplex capability, and digital readout. Experiments performed on 509 human genes yielded a replicate correlation coefficient of 0.999, a detection limit between 0.1 fM and 0.5 fM, and a linear dynamic range of over 500-fold. Comparison of the NanoString nCounter gene expression system with microarrays and TaqMan PCR demonstrated that the nCounter system is more sensitive than microarrays and similar in sensitivity to real-time PCR. Finally, a comparison of transcript levels for 21 genes across seven samples measured by the nCounter system and SYBR Green real-time PCR demonstrated similar patterns of gene expression at all transcript levels.

miRDB: a microRNA target prediction and functional annotation database with a wiki interface.

Xiaowei Wang (2008)
MicroRNAs (miRNAs) are short noncoding RNAs that are involved in the regulation of thousands of gene targets. Recent studies indicate that miRNAs are likely to be master regulators of many important biological processes. Due to their functional importance, miRNAs are under intense study at present, and many studies have been published in recent years on miRNA functional characterization. The rapid accumulation of miRNA knowledge makes it challenging to properly organize and present miRNA function data. Although several miRNA functional databases have been developed recently, this remains a major bioinformatics challenge to miRNA research community. Here, we describe a new online database system, miRDB, on miRNA target prediction and functional annotation. Flexible web search interface was developed for the retrieval of target prediction results, which were generated with a new bioinformatics algorithm we developed recently. Unlike most other miRNA databases, miRNA functional annotations in miRDB are presented with a primary focus on mature miRNAs, which are the functional carriers of miRNA-mediated gene expression regulation. In addition, a wiki editing interface was established to allow anyone with Internet access to make contributions on miRNA functional annotation. This is a new attempt to develop an interactive community-annotated miRNA functional catalog. All data stored in miRDB are freely accessible at http://mirdb.org.