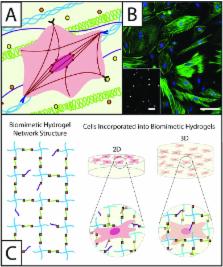 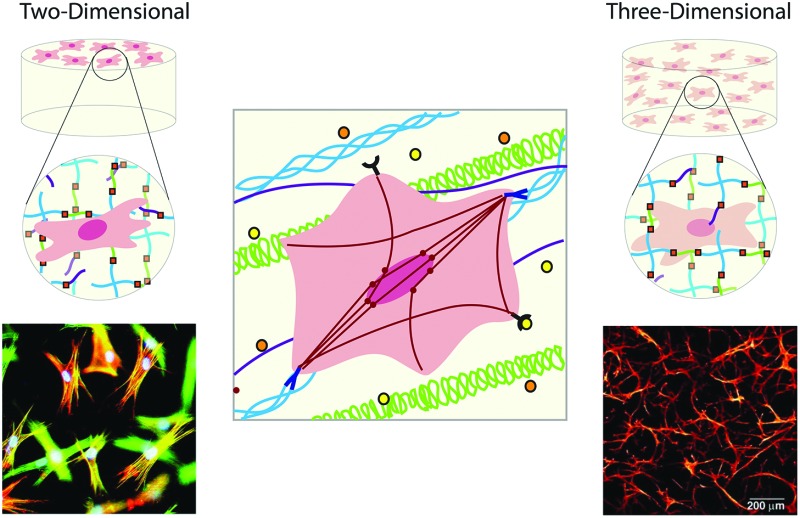 Hydrogels offer controllable and well-defined in vitro platforms to study the role of the fibroblast in wound healing and fibrosis.

Wound healing results from complex signaling between cells and their environment in response to injury. Fibroblasts residing within the extracellular matrix (ECM) of various connective tissues are critical for matrix synthesis and repair. Upon injury or chronic insult, these cells activate into wound-healing cells, called myofibroblasts, and repair the damaged tissue through enzyme and protein secretion. However, misregulation and persistence of myofibroblasts can lead to uncontrolled accumulation of matrix proteins, tissue stiffening, and ultimately disease. Extracellular cues are important regulators of fibroblast activation and have been implicated in their persistence. Hydrogel-based culture models have emerged as useful tools to examine fibroblast response to ECM cues presented during these complex processes. In this Mini-Review, we will provide an overview of these model systems, which are built upon naturally-derived or synthetic materials, and mimic relevant biophysical and biochemical properties of the native ECM with different levels of control. Additionally, we will discuss the application of these hydrogel-based systems for the examination of fibroblast function and fate, including adhesion, migration, and activation, as well as approaches for mimicking both static and temporal aspects of extracellular environments. Specifically, we will highlight hydrogels that have been used to investigate the effects of matrix rigidity, protein binding, and cytokine signaling on fibroblast activation. Last, we will describe future directions for the design of hydrogels to develop improved synthetic models that mimic the complex extracellular environment.

RGD and other recognition sequences for integrins.

E Ruoslahti (1995)
Proteins that contain the Arg-Gly-Asp (RGD) attachment site, together with the integrins that serve as receptors for them, constitute a major recognition system for cell adhesion. The RGD sequence is the cell attachment site of a large number of adhesive extracellular matrix, blood, and cell surface proteins, and nearly half of the over 20 known integrins recognize this sequence in their adhesion protein ligands. Some other integrins bind to related sequences in their ligands. The integrin-binding activity of adhesion proteins can be reproduced by short synthetic peptides containing the RGD sequence. Such peptides promote cell adhesion when insolubilized onto a surface, and inhibit it when presented to cells in solution. Reagents that bind selectively to only one or a few of the RGD-directed integrins can be designed by cyclizing peptides with selected sequences around the RGD and by synthesizing RGD mimics. As the integrin-mediated cell attachment influences and regulates cell migration, growth, differentiation, and apoptosis, the RGD peptides and mimics can be used to probe integrin functions in various biological systems. Drug design based on the RGD structure may provide new treatments for diseases such as thrombosis, osteoporosis, and cancer.

N A Peppas,  Diana Fisher,  Ali Khademhosseini … (2009)
Hydrogels, due to their unique biocompatibility, flexible methods of synthesis, range of constituents, and desirable physical characteristics, have been the material of choice for many applications in regenerative medicine. They can serve as scaffolds that provide structural integrity to tissue constructs, control drug and protein delivery to tissues and cultures, and serve as adhesives or barriers between tissue and material surfaces. In this work, the properties of hydrogels that are important for tissue engineering applications and the inherent material design constraints and challenges are discussed. Recent research involving several different hydrogels polymerized from a variety of synthetic and natural monomers using typical and novel synthetic methods are highlighted. Finally, special attention is given to the microfabrication techniques that are currently resulting in important advances in the field.

Cole DeForest,  Brian D. Polizzotti,  Kristi S. Anseth (2009)
Click chemistry provides extremely selective and orthogonal reactions that proceed with high efficiency and under a variety of mild conditions, the most common example being the copper(I)-catalyzed reaction of azides with alkynes1,2. While the versatility of click reactions has been broadly exploited3–5, a major limitation is the intrinsic toxicity of the synthetic schemes and the inability to translate these approaches to biological applications. This manuscript introduces a robust synthetic strategy where macromolecular precursors react via a copper-free click chemistry6, allowing for the direct encapsulation of cells within click hydrogels for the first time. Subsequently, an orthogonal thiol-ene photocoupling chemistry is introduced that enables patterning of biological functionalities within the gel in real-time and with micron-scale resolution. This material system allows one to tailor independently the biophysical and biochemical properties of the cell culture microenvironments in situ. This synthetic approach uniquely allows for the direct fabrication of biologically functionalized gels with ideal structures that can be photopatterned and all in the presence of cells.