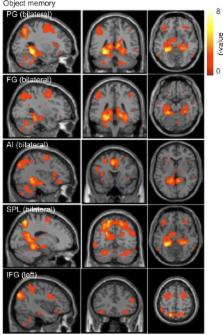 Being able to remember physically and emotionally painful events in one’s own past may shape behavior, and can create an aversion to a variety of situations. Pain imagination is a related process that may include recall of past experiences, in addition to production of sensory and emotional percepts without external stimuli. This study aimed to understand 1) the central nervous system processes that underlie pain imagination, 2) the retrieval of pain memories, and 3) to compare the latter with visual object memory. These goals were achieved by longitudinally investigating brain function with functional magnetic resonance imaging in a unique group of healthy volunteers who had never experienced tooth pain. In these subjects, we compared brain responses elicited during three experimental conditions in the following order: imagination of tooth pain (pain imagination), remembering one’s own house (object memory), and remembrance of tooth pain following an episode of induced acute tooth pain (pain memory). Key observations stemming from group-level conjunction analyses revealed common activation in the posterior parietal cortex for both pain imagination and pain memory, while object and pain memory each had strong activation predominantly within the middle frontal gyrus. When contrasting pain imagination and memory, significant activation differences were observed in subcortical structures (ie, parahippocampus − pain imagination > pain memory; midbrain − pain memory > pain imagination). Importantly, these findings were observed in the presence of consistent and reproducible psychophysical and behavioral measures that informed on the subjects’ ability to imagine novel and familiar thoughts, as well as the subjects’ pain perception.

Functional connectivity of the insula in the resting brain.

Federico D’Agata,  Giuliano Geminiani,  Katiuscia Sacco … (2011)
The human insula is hidden in the depth of the cerebral hemisphere by the overlying frontal and temporal opercula, and consists of three cytoarchitectonically distinct regions: the anterior agranular area, posterior granular area, and the transitional dysgranular zone; each has distinct histochemical staining patterns and specific connectivity. Even though there are several studies reporting the functional connectivity of the insula with the cingulated cortex, its relationships with other brain areas remain elusive in humans. Therefore, we decided to use resting state functional connectivity to elucidate in details its connectivity, in terms of cortical and subcortical areas, and also of lateralization. We investigated correlations in BOLD fluctuations between specific regions of interest of the insula and other brain areas of right-handed healthy volunteers, on both sides of the brain. Our findings document two major complementary networks involving the ventral-anterior and dorsal-posterior insula: one network links the anterior insula to the middle and inferior temporal cortex and anterior cingulate cortex, and is primarily related to limbic regions which play a role in emotional aspects; the second links the middle-posterior insula to premotor, sensorimotor, supplementary motor and middle-posterior cingulate cortices, indicating a role for the insula in sensorimotor integration. The clear bipartition of the insula was confirmed by negative correlation analysis. Correlation maps are partially lateralized: the salience network, related to the ventral anterior insula, displays stronger connections with the anterior cingulate cortex on the right side, and with the frontal cortex on the left side; the posterior network has stronger connections with the superior temporal cortex and the occipital cortex on the right side. These results are in agreement with connectivity studies in primates, and support the use of resting state functional analysis to investigate connectivity in the living human brain. Copyright © 2010 Elsevier Inc. All rights reserved.

Visual imagery differences in the recall of pictures.