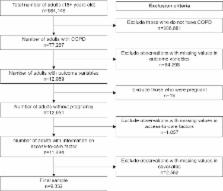 Limited accessibility to health care may be a barrier to obtaining good care. Few studies have investigated the association between access-to-care factors and COPD hospitalizations. The objective of this study is to estimate the association between access-to-care factors and health care utilization including hospital/emergency department (ED) visits and primary care physician (PCP) office visits among adults with COPD utilizing a nationally representative survey data.

Among a total of 9,332 observations, proportions of hospital/ED visits and PCP office visits were 16.2% and 44.2%, respectively. Results demonstrated that access-to-care factors were closely associated with hospital/ED visits. An additional pulmonary care specialist per 100,000 persons serves to reduce the likelihood of a hospital/ED visit by 0.4 percentage points (pp) ( P=0.028). In contrast, an additional hospital per 100,000 persons increases the likelihood of hospital/ED visit by 0.8 pp ( P=0.008). However, safety net facilities were not related to hospital utilizations. PCP office visits were not related to access-to-care factors.

K. KOCHANEK,  Jiaquan Xu,  Andrea Murphy (2013)
This report presents final 2010 data on U.S. deaths, death rates, life expectancy, infant mortality, and trends by selected characteristics such as age, sex, Hispanic origin, race, state of residence, and cause of death. Information reported on death certificates, which is completed by funeral directors, attending physicians, medical examiners, and coroners, is presented in descriptive tabulations. The original records are filed in state registration offices. Statistical information is compiled in a national database through the Vital Statistics Cooperative Program of the Centers for Disease Control and Prevention's National Center for Health Statistics. Causes of death are processed in accordance with the International Classification of Diseases, Tenth Revision. In 2010, a total of 2,468,435 deaths were reported in the United States. The age-adjusted death rate was 747.0 deaths per 100,000 standard population, lower than the 2009 rate (749.6) and a record low rate. Life expectancy at birth rose 0.2 year, from 78.5 years in 2009 to a record high of 78.7 in 2010. Age-specific death rates decreased for each age group under 85, although the decrease for ages 1-4 was not significant. The age-specific rate increased for ages 85 and over. The leading causes of death in 2010 remained the same as in 2009 for all but one of the 15 leading causes. Pneumonitis due to solids and liquids replaced Assault (homicide) as the 15th leading cause of death in 2010. The infant mortality rate decreased 3.8% to a historically low value of 6.15 deaths per 1,000 live births in 2010. The decline of the age-adjusted death rate to a record low value for the United States, and the increase in life expectancy to a record high value of 78.7 years, are consistent with long-term trends in mortality.