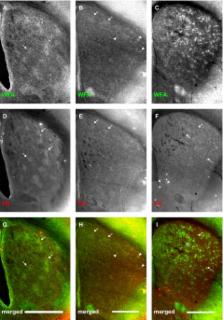 The neostriatum, the mouse homologue of the primate caudate/putamen, is the input nucleus for the basal ganglia, receiving both cortical and dopaminergic input to each of its sub-compartments, the striosomes and matrix. The coordinated activation of corticostriatal pathways is considered vital for motor and cognitive abilities, yet the mechanisms which underlie the generation of these circuits are unknown. The early and specific targeting of striatal subcompartments by both corticostriatal and nigrostriatal terminals suggests activity-independent mechanisms, such as axon guidance cues, may play a role in this process. Candidates include the chondroitin sulfate proteoglycan (CSPG) family of glycoproteins which have roles not only in axon guidance, but also in the maturation and stability of neural circuits where they are expressed in lattice-like perineuronal nets (PNNs).

The expression of CSPG-associated structures and PNNs with respect to neostriatal subcompartments has been examined qualitatively and quantitatively using double-labelling for Wisteria floribunda agglutinin (WFA), and the μ-opioid receptor (μOR), a marker for striosomes, at six postnatal ages in mice. We find that at the earliest ages (postnatal day (P)4 and P10), WFA-positive clusters overlap preferentially with the striosome compartment. By P14, these clusters disappear. In contrast, PNNs were first seen at P10 and continued to increase in density and spread throughout the caudate/putamen with maturation. Remarkably, the PNNs overlap almost exclusively with the neostriatal matrix.

This is the first description of a reversal in the distribution of CSPG associated structures, as well as the emergence and maintenance of PNNs in specific subcompartments of the neostriatum. These results suggest diverse roles for CSPGs in the formation of functional corticostriatal and nigrostriatal connectivity within the striosome and matrix compartments of the developing caudate/putamen.

Dopamine neurons report an error in the temporal prediction of reward during learning.

W. Schultz,  J Hollerman (1998)
Many behaviors are affected by rewards, undergoing long-term changes when rewards are different than predicted but remaining unchanged when rewards occur exactly as predicted. The discrepancy between reward occurrence and reward prediction is termed an 'error in reward prediction'. Dopamine neurons in the substantia nigra and the ventral tegmental area are believed to be involved in reward-dependent behaviors. Consistent with this role, they are activated by rewards, and because they are activated more strongly by unpredicted than by predicted rewards they may play a role in learning. The present study investigated whether monkey dopamine neurons code an error in reward prediction during the course of learning. Dopamine neuron responses reflected the changes in reward prediction during individual learning episodes; dopamine neurons were activated by rewards during early trials, when errors were frequent and rewards unpredictable, but activation was progressively reduced as performance was consolidated and rewards became more predictable. These neurons were also activated when rewards occurred at unpredicted times and were depressed when rewards were omitted at the predicted times. Thus, dopamine neurons code errors in the prediction of both the occurrence and the time of rewards. In this respect, their responses resemble the teaching signals that have been employed in particularly efficient computational learning models.

Responses of monkey dopamine neurons to reward and conditioned stimuli during successive steps of learning a delayed response task.

W. Schultz,  P Apicella,  T Ljungberg (1993)
The present investigation had two aims: (1) to study responses of dopamine neurons to stimuli with attentional and motivational significance during several steps of learning a behavioral task, and (2) to study the activity of dopamine neurons during the performance of cognitive tasks known to be impaired after lesions of these neurons. Monkeys that had previously learned a simple reaction time task were trained to perform a spatial delayed response task via two intermediate tasks. During the learning of each new task, a total of 25% of 76 dopamine neurons showed phasic responses to the delivery of primary liquid reward, whereas only 9% of 163 neurons responded to this event once task performance was established. This produced an average population response during but not after learning of each task. Reward responses during learning were significantly more numerous and pronounced in area A10, as compared to areas A8 and A9. Dopamine neurons also showed phasic responses to the two conditioned stimuli. These were the instruction cue, which was the first stimulus in each trial and indicated the target of the upcoming arm movement (58% of 76 neurons during and 44% of 163 neurons after learning), and the trigger stimulus, which was a conditioned incentive stimulus predicting reward and eliciting a saccadic eye movement and an arm reaching movement (38% of neurons during and 40% after learning). None of the dopamine neurons showed sustained activity in the delay between the instruction and trigger stimuli that would resemble the activity of neurons in dopamine terminal areas, such as the striatum and frontal cortex. Thus, dopamine neurons respond phasically to alerting external stimuli with behavioral significance whose detection is crucial for learning and performing delayed response tasks. The lack of sustained activity suggests that dopamine neurons do not encode representational processes, such as working memory, expectation of external stimuli or reward, or preparation of movement. Rather, dopamine neurons are involved with transient changes of impulse activity in basic attentional and motivational processes underlying learning and cognitive behavior.

Physiological, morphological, and histochemical characterization of three classes of interneurons in rat neostriatum.

Y Kawaguchi (1993)
Interneurons in lateral part of neostriatum were studied in isolated slices from juvenile rats (16-20 d postnatal) by whole-cell, current-clamp recording at 33-34 degrees C, followed by intracellular staining with biocytin and double immunocytochemical or histochemical staining for parvalbumin, ChAT, and NADPH diaphorase. Medium-sized spiny neurons (MS cells) had distal dendrites with many spines and were likely projection cells, while interneurons had dendrites with fewer spines. The neostriatal interneurons could be further divided into three classes by physiological, chemical, and morphological criteria. The first class of interneurons (fast-spiking cells, FS cells) fired very short-duration action potentials with short-duration afterhyperpolarizations at constant spike frequency during depolarizing current pulses. FS cells had more negative resting potentials and lower input resistances than the other two classes. At depolarized potentials, FS cells fired repetitive spikes in response to synaptic excitation. FS cells were immunoreactive for parvalbumin. As all parvalbumin-immunoreactive cells in the neostriatum were also immunoreactive for GABA, FS cells were considered to be GABAergic. FS cells were further divided into two morphological types: FS cells with local dendritic fields and FS cells with extended dendritic fields. The axons of both types of FS cells had their densest collateralization within or near their dendritic fields. The other two classes of interneuron, PLTS cells (persistent and low-threshold spike cells) and LA cells (long-lasting afterhyperpolarization cells), were distinguished from FS cells by longer-duration action potentials and larger input resistances, had less negative resting potentials, and had longer-lasting afterhyperpolarizations. Afterhyperpolarizations of PLTS cells had a shorter time to peak than those of LA cells. PLTS cells fired both Na(+)-dependent, persistent depolarization spikes and Ca(2+)-dependent, low-threshold spikes in addition to fast spikes. Low-threshold spikes in PLTS cells were induced only from hyperpolarized potentials. Both persistent depolarizations and low-threshold spikes could also be evoked by synaptic activation. PLTS cells were histochemically identified as NADPH diaphorase-positive cells. As all NADPH diaphorase-positive cells in the same tissue were immunoreactive for nitric oxide (NO) synthase, PLTS cells were considered to release NO. PLTS cells had the largest axonal fields. Some PLTS cells appeared to have two axonal origins from the somata and dendrites. LA cells were mostly large aspiny cells with Ca(2+)-dependent long-lasting afterhyperpolarizations and strong time-dependent hyperpolarizing rectification. As this slowly occurring anomalous rectification was blocked by 2 mM cesium, this potential was considered to be due to activation of Ih.(ABSTRACT TRUNCATED AT 400 WORDS)