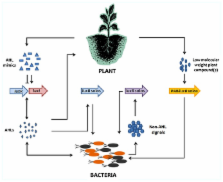 A future challenge will be understanding the extensive communication that most likely takes place in bacterial interspecies and interkingdom signaling between plants and bacteria. A major bacterial inter-cellular signaling system in Gram-negative bacteria is LuxI/R quorum sensing (QS) based on the production (via the LuxI-family proteins) and detection (via the LuxR-family proteins) of N-acyl homoserine lactones (AHLs) signaling molecules. LuxR proteins which have the same modular structure of QS LuxRs but are devoid of a cognate LuxI AHL synthase are called solos. LuxR solos have been shown to be responsible to respond to exogenous AHLs produced by neighboring cells as well endogenously produced AHLs. It is now also evident that some LuxR proteins have evolved from the ability to binding AHLs and respond to other molecules/signals. For example, recent research has shown that a sub-family of LuxR solos responds to small molecules produced by plants. This indicates the presence of a uni-directional interkingdom signaling system occurring from plants to bacteria. In addition LuxR solos have now been also implicated to respond to endogenously produced signals which are not AHLs. In this Mini Review article we will discuss current trends and implications of the role of LuxR solos in bacterial responses to other signals using proteins related to AHL QS systems.

Matthew Parsek,  E. Peter Greenberg,  Burcham C Fuqua (2000)
Quorum sensing is an example of community behavior prevalent among diverse bacterial species. The term "quorum sensing" describes the ability of a microorganism to perceive and respond to microbial population density, usually relying on the production and subsequent response to diffusible signal molecules. A significant number of gram-negative bacteria produce acylated homoserine lactones (acyl-HSLs) as signal molecules that function in quorum sensing. Bacteria that produce acyl-HSLs can respond to the local concentration of the signaling molecules, and high population densities foster the accumulation of inducing levels of acyl-HSLs. Depending upon the bacterial species, the physiological processes regulated by quorum sensing are extremely diverse, ranging from bioluminescence to swarming motility. Acyl-HSL quorum sensing has become a paradigm for intercellular signaling mechanisms. A flurry of research over the past decade has led to significant understanding of many aspects of quorum sensing including the synthesis of acyl-HSLs, the receptors that recognize the acyl-HSL signal and transduce this information to the level of gene expression, and the interaction of these receptors with the transcriptional machinery. Recent studies have begun to integrate acyl-HSL quorum sensing into global regulatory networks and establish its role in developing and maintaining the structure of bacterial communities.

Census and consensus in bacterial ecosystems: the LuxR-LuxI family of quorum-sensing transcriptional regulators.

E. Peter Greenberg,  Burcham C Fuqua,  S Winans (1995)
The importance of accurate demographic information is reflected in the United States Constitution, Article 1, which provides for a decennial census of this country's human population. Bacteria also conduct a census of their population and do so more frequently, more efficiently, and as far we know, with little if any of the political contentiousness caused by human demographers. Many examples have been found of particular bacterial genes, operons, or regulons that are expressed preferentially at high cell densities. Many of these are regulated by proteins related to the LuxR and LuxI proteins of Vibrio fischeri, and by a diffusible pheromone called an autoinducer. LuxR and LuxI and their cognate autoinducer (3-oxohexanoyl homoserine lactone, designated VAI-1) provide an important model to describe the functions of this family of proteins. LuxR is a VAI-1 receptor and a VAI-1-dependent transcriptional activator, and LuxI directs the synthesis of VAI-1. VAI-1 diffuses across the bacterial envelope, and intracellular concentrations of it are therefore strongly increased by nearby VAI-1-producing bacteria. Similar systems regulate pathogenesis factors in Pseudomonas aeruginosa and Erwinia spp., as well as T1 plasmid conjugal transfer in Agrobacterium tumefaciens, and many other genes in numerous genera of gram-negative bacteria. Genetic analyses of these systems have revealed a high degree of functional conservation, while also uncovering features that are unique to each.

Clay Fuqua,  Thomas Danhorn (2006)
Plants support a diverse array of bacteria, including parasites, mutualists, and commensals on and around their roots, in the vasculature, and on aerial tissues. These microbes have a profound influence on plant health and productivity. Bacteria physically interact with surfaces to form complex multicellular and often multispecies assemblies, including biofilms and smaller aggregates. There is growing appreciation that the intensity, duration, and outcome of plant-microbe interactions are significantly influenced by the conformation of adherent microbial populations. Biofilms on different tissues have unique properties, reflecting the prevailing conditions at those sites. Attachment is required for biofilm formation, and bacteria interact with plant tissues through adhesins including polysaccharides and surface proteins, with initial contact often mediated by active motility. Recognition between lectins and their cognate carbohydrates is a common means of specificity. Biofilm development and the resulting intimate interactions with plants often require cell-cell communication between colonizing bacteria.

This article was submitted to Plant-Microbe Interaction, a section of the journal Frontiers in Plant Science.