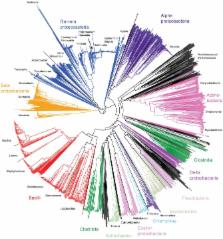 No single genealogical reconstruction or typing method currently encompasses all levels of bacterial diversity, from domain to strain. We propose ribosomal multilocus sequence typing (rMLST), an approach which indexes variation of the 53 genes encoding the bacterial ribosome protein subunits ( rps genes), as a means of integrating microbial genealogy and typing. As with multilocus sequence typing (MLST), rMLST employs curated reference sequences to identify gene variants efficiently and rapidly. The rps loci are ideal targets for a universal characterization scheme as they are: (i) present in all bacteria; (ii) distributed around the chromosome; and (iii) encode proteins which are under stabilizing selection for functional conservation. Collectively, the rps loci exhibit variation that resolves bacteria into groups at all taxonomic and most typing levels, providing significantly more resolution than 16S small subunit rRNA gene phylogenies. A web-accessible expandable database, comprising whole-genome data from more than 1900 bacterial isolates, including 28 draft genomes assembled de novo from the European Bioinformatics Institute (EBI) sequence read archive, has been assembled. The rps gene variation catalogued in this database permits rapid and computationally non-intensive identification of the phylogenetic position of any bacterial sequence at the domain, phylum, class, order, family, genus, species and strain levels. The groupings generated with rMLST data are consistent with current nomenclature schemes and independent of the clustering algorithm used. This approach is applicable to the other domains of life, potentially providing a rational and universal approach to the classification of life that is based on one of its fundamental features, the translation mechanism.

Towards a natural system of organisms: proposal for the domains Archaea, Bacteria, and Eucarya.

C Woese, O Kandler, M L Wheelis (1990)
Molecular structures and sequences are generally more revealing of evolutionary relationships than are classical phenotypes (particularly so among microorganisms). Consequently, the basis for the definition of taxa has progressively shifted from the organismal to the cellular to the molecular level. Molecular comparisons show that life on this planet divides into three primary groupings, commonly known as the eubacteria, the archaebacteria, and the eukaryotes. The three are very dissimilar, the differences that separate them being of a more profound nature than the differences that separate typical kingdoms, such as animals and plants. Unfortunately, neither of the conventionally accepted views of the natural relationships among living systems--i.e., the five-kingdom taxonomy or the eukaryote-prokaryote dichotomy--reflects this primary tripartite division of the living world. To remedy this situation we propose that a formal system of organisms be established in which above the level of kingdom there exists a new taxon called a "domain." Life on this planet would then be seen as comprising three domains, the Bacteria, the Archaea, and the Eucarya, each containing two or more kingdoms. (The Eucarya, for example, contain Animalia, Plantae, Fungi, and a number of others yet to be defined). Although taxonomic structure within the Bacteria and Eucarya is not treated herein, Archaea is formally subdivided into the two kingdoms Euryarchaeota (encompassing the methanogens and their phenotypically diverse relatives) and Crenarchaeota (comprising the relatively tight clustering of extremely thermophilic archaebacteria, whose general phenotype appears to resemble most the ancestral phenotype of the Archaea.

Multilocus sequence typing: a portable approach to the identification of clones within populations of pathogenic microorganisms.

M. C. J. Maiden, J. Bygraves, E Feil … (1998)
Traditional and molecular typing schemes for the characterization of pathogenic microorganisms are poorly portable because they index variation that is difficult to compare among laboratories. To overcome these problems, we propose multilocus sequence typing (MLST), which exploits the unambiguous nature and electronic portability of nucleotide sequence data for the characterization of microorganisms. To evaluate MLST, we determined the sequences of approximately 470-bp fragments from 11 housekeeping genes in a reference set of 107 isolates of Neisseria meningitidis from invasive disease and healthy carriers. For each locus, alleles were assigned arbitrary numbers and dendrograms were constructed from the pairwise differences in multilocus allelic profiles by cluster analysis. The strain associations obtained were consistent with clonal groupings previously determined by multilocus enzyme electrophoresis. A subset of six gene fragments was chosen that retained the resolution and congruence achieved by using all 11 loci. Most isolates from hyper-virulent lineages of serogroups A, B, and C meningococci were identical for all loci or differed from the majority type at only a single locus. MLST using six loci therefore reliably identified the major meningococcal lineages associated with invasive disease. MLST can be applied to almost all bacterial species and other haploid organisms, including those that are difficult to cultivate. The overwhelming advantage of MLST over other molecular typing methods is that sequence data are truly portable between laboratories, permitting one expanding global database per species to be placed on a World-Wide Web site, thus enabling exchange of molecular typing data for global epidemiology via the Internet.

Notes on the characterization of prokaryote strains for taxonomic purposes.

B. Tindall, R Rosselló-Móra, H-J Busse … (2010)
Taxonomy relies on three key elements: characterization, classification and nomenclature. All three elements are dynamic fields, but each step depends on the one which precedes it. Thus, the nomenclature of a group of organisms depends on the way they are classified, and the classification (among other elements) depends on the information gathered as a result of characterization. While nomenclature is governed by the Bacteriological Code, the classification and characterization of prokaryotes is an area that is not formally regulated and one in which numerous changes have taken place in the last 50 years. The purpose of the present article is to outline the key elements in the way that prokaryotes are characterized, with a view to providing an overview of some of the pitfalls commonly encountered in taxonomic papers.