Top-Down Control of Visual Alpha Oscillations: Sources of Control Signals and Their Mechanisms of Action 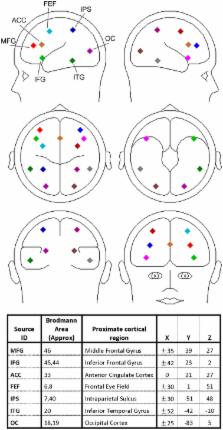 Alpha oscillations (8–12 Hz) are thought to inversely correlate with cortical excitability. Goal-oriented modulation of alpha has been studied extensively. In visual spatial attention, alpha over the region of visual cortex corresponding to the attended location decreases, signifying increased excitability to facilitate the processing of impending stimuli. In contrast, in retention of verbal working memory, alpha over visual cortex increases, signifying decreased excitability to gate out stimulus input to protect the information held online from sensory interference. According to the prevailing model, this goal-oriented biasing of sensory cortex is effected by top-down control signals from frontal and parietal cortices. The present study tests and substantiates this hypothesis by (a) identifying the signals that mediate the top-down biasing influence, (b) examining whether the cortical areas issuing these signals are task-specific or task-independent, and (c) establishing the possible mechanism of the biasing action. High-density human EEG data were recorded in two experimental paradigms: a trial-by-trial cued visual spatial attention task and a modified Sternberg working memory task. Applying Granger causality to both sensor-level and source-level data we report the following findings. In covert visual spatial attention, the regions exerting top-down control over visual activity are lateralized to the right hemisphere, with the dipoles located at the right frontal eye field (FEF) and the right inferior frontal gyrus (IFG) being the main sources of top-down influences. During retention of verbal working memory, the regions exerting top-down control over visual activity are lateralized to the left hemisphere, with the dipoles located at the left middle frontal gyrus (MFG) being the main source of top-down influences. In both experiments, top-down influences are mediated by alpha oscillations, and the biasing effect is likely achieved via an inhibition-disinhibition mechanism.

Control of goal-directed and stimulus-driven attention in the brain.

Gordon Shulman,  Maurizio Corbetta (2002)
We review evidence for partially segregated networks of brain areas that carry out different attentional functions. One system, which includes parts of the intraparietal cortex and superior frontal cortex, is involved in preparing and applying goal-directed (top-down) selection for stimuli and responses. This system is also modulated by the detection of stimuli. The other system, which includes the temporoparietal cortex and inferior frontal cortex, and is largely lateralized to the right hemisphere, is not involved in top-down selection. Instead, this system is specialized for the detection of behaviourally relevant stimuli, particularly when they are salient or unexpected. This ventral frontoparietal network works as a 'circuit breaker' for the dorsal system, directing attention to salient events. Both attentional systems interact during normal vision, and both are disrupted in unilateral spatial neglect.

A mechanism for cognitive dynamics: neuronal communication through neuronal coherence.