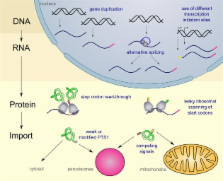 Cellular compartmentalization into organelles serves to separate biological processes within the environment of a single cell. While some metabolic reactions are specific to a single organelle, others occur in more than one cellular compartment. Specific targeting of proteins to compartments inside of eukaryotic cells is mediated by defined sequence motifs. To achieve multiple targeting to different compartments cells use a variety of strategies. Here, we focus on mechanisms leading to dual targeting of peroxisomal proteins. In many instances, isoforms of peroxisomal proteins with distinct intracellular localization are encoded by separate genes. But also single genes can give rise to differentially localized proteins. Different isoforms can be generated by use of alternative transcriptional start sites, by differential splicing or ribosomal read-through of stop codons. In all these cases different peptide variants are produced, of which only one carries a peroxisomal targeting signal. Alternatively, peroxisomal proteins contain additional signals that compete for intracellular targeting. Dual localization of proteins residing in both the cytoplasm and in peroxisomes may also result from use of inefficient targeting signals. The recent observation that some bona fide cytoplasmic enzymes were also found in peroxisomes indicates that dual targeting of proteins to both the cytoplasm and the peroxisome might be more widespread. Although current knowledge of proteins exhibiting only partial peroxisomal targeting is far from being complete, we speculate that the metabolic capacity of peroxisomes might be larger than previously assumed.

Expansion of the eukaryotic proteome by alternative splicing.

Dennis Nilsen,  Brenton R. Graveley (2010)
The collection of components required to carry out the intricate processes involved in generating and maintaining a living, breathing and, sometimes, thinking organism is staggeringly complex. Where do all of the parts come from? Early estimates stated that about 100,000 genes would be required to make up a mammal; however, the actual number is less than one-quarter of that, barely four times the number of genes in budding yeast. It is now clear that the 'missing' information is in large part provided by alternative splicing, the process by which multiple different functional messenger RNAs, and therefore proteins, can be synthesized from a single gene.

Proof and evolutionary analysis of ancient genome duplication in the yeast Saccharomyces cerevisiae.

Bruce W. Birren,  Manolis Kellis,  Eric S. Lander (2004)
Whole-genome duplication followed by massive gene loss and specialization has long been postulated as a powerful mechanism of evolutionary innovation. Recently, it has become possible to test this notion by searching complete genome sequence for signs of ancient duplication. Here, we show that the yeast Saccharomyces cerevisiae arose from ancient whole-genome duplication, by sequencing and analysing Kluyveromyces waltii, a related yeast species that diverged before the duplication. The two genomes are related by a 1:2 mapping, with each region of K. waltii corresponding to two regions of S. cerevisiae, as expected for whole-genome duplication. This resolves the long-standing controversy on the ancestry of the yeast genome, and makes it possible to study the fate of duplicated genes directly. Strikingly, 95% of cases of accelerated evolution involve only one member of a gene pair, providing strong support for a specific model of evolution, and allowing us to distinguish ancestral and derived functions.

This article was submitted to Integrative Physiology, a section of the journal Frontiers in Physiology.