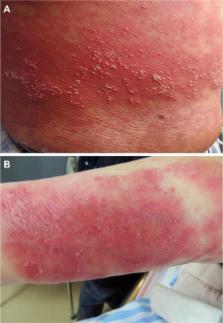 Panax notoginseng saponins (PNS) are a patented product in the People’s Republic of China, and have extensive effects on the cardiovascular system. Here we report on four elderly patients (one male and three female) with drug eruption induced by PNS injection. All developed a sudden skin rash with pruritus from head to foot, and subsequently accepted hospitalization. In each case, PNS had been used for less than 1 week before appearance of the rash. No specific short-term medications or changes in diet or exposure to environmental factors immediately prior to appearance of the rash were identified. These four patients had some interesting features in common, ie, pustules, fever, and elevated circulating neutrophil counts, which required high-dose, long-term glucocorticoid therapy. To our knowledge, this is the first report of pustular drug eruption induced by PNS and provides a useful reference and warning for clinicians.

Syed Ahmed Zaki (2011)
Sir, I read with interest the articles by Gupta et al and Gulati et al on adverse drug reactions of antituberculous drugs.[1 2] I would like to make the following comments. Adverse drug reactions (ADRs) are a major cause of morbidity, hospital admission, and even death. Hence it is essential to recognise ADRs and to establish a causal relationship between the drug and the adverse event. It is desirable that ADRs should be objectively assessed and presented based on an acceptable “Probability Scale.” Many causality methods have been proposed to assess the relationship between a drug and an adverse event in a given patient, ranging from short questionnaires to comprehensive algorithms. The idea of creating a standardized assessment for the relationship-likelihood of case reports of suspected ADRs was in the hope that this would, in a structured way, lead to a reliable reproducible measurement of causality. The causality assessment system proposed by the World Health Organization Collaborating Centre for International Drug Monitoring, the Uppsala Monitoring Centre (WHO–UMC), and the Naranjo Probability Scale are the generally accepted and most widely used methods for causality assessment in clinical practice as they offer a simple methodology.[3 4] The above scales are structured, transparent, consistent, and easy to apply assessment methods. Table 1 summarizes the “Naranjo ADR Probability Scale,” which has gained popularity among clinicians because of its simplicity.[3] The WHO–UMC causality system takes into account the clinical-pharmacologic aspects, whereas previous knowledge of the ADR plays a less prominent role. Table 2 summarizes the WHO–UMC Probability Scale.[4] Table 1 Naranjo ADR probability scale—items and score Question Yes No Don’t know Are there previous conclusion reports on this reaction? +1 0 0 Did the adverse event appear after the suspect drug was administered? +2 –1 0 Did the AR improve when the drug was discontinued or a specific antagonist was administered? +1 0 0 Did the AR reappear when drug was re-administered? +2 –1 0 Are there alternate causes [other than the drug] that could solely have caused the reaction? –1 +2 0 Did the reaction reappear when a placebo was given? –1 +1 0 Was the drug detected in the blood [or other fluids] in a concentration known to be toxic? +1 0 0 Was the reaction more severe when the dose was increased or less severe when the dose was decreased? +1 0 0 Did the patient have a similar reaction to the same or similar drugs in any previous exposure? +1 0 0 Was the adverse event confirmed by objective evidence? +1 0 0 Scoring for Naranjo algorithm: >9 = definite ADR; 5–8 = probable ADR; 1–4 = possible ADR; 0 = doubtful ADR. Table 2 WHO–UMC causality categories Causality term Assessment criteria (all points should be reasonably complied) Certain Event or laboratory test abnormality, with plausible time relationship to drug intake Cannot be explained by disease or other drugs Response to withdrawal plausible (pharmacologically, pathologically) Event definitive pharmacologically or phenomenologically (ie, an objective and specific medical disorder or a recognized pharmacologic phenomenon) Rechallenge satisfactory, if necessary Probable/likely Event or laboratory test abnormality, with reasonable time relationship to drug intake Unlikely to be attributed to disease or other drugs Response to withdrawal clinically reasonable Rechallenge not required Possible Event or laboratory test abnormality, with reasonable time relationship to drug intake Could also be explained by disease or other drugs Information on drug withdrawal may be lacking or unclear Unlikely Event or laboratory test abnormality, with a time to drug intake that makes a relationship improbable (but not impossible) Disease or other drugs provide plausible explanation Conditional/unclassified Event or laboratory test abnormality More data for proper assessment needed, or Additional data under examination Unassessable/unclassifiable Report suggesting an adverse reaction Cannot be judged because information is insufficient or contradictory Data cannot be supplemented or verified I humbly request the Editors that Lung India should use either of the above two scales while reviewing articles related to ADRs.

A Network Study of Chinese Medicine Xuesaitong Injection to Elucidate a Complex Mode of Action with Multicompound, Multitarget, and Multipathway

Linli Wang,  Zheng Li,  Xiaoping Zhao … (2013)
Chinese medicine has evolved from thousands of years of empirical applications and experiences of combating diseases. It has become widely recognized that the Chinese medicine acts through complex mechanisms featured as multicompound, multitarget and multipathway. However, there is still a lack of systematic experimental studies to elucidate the mechanisms of Chinese medicine. In this study, the differentially expressed genes (DEGs) were identified from myocardial infarction rat model treated with Xuesaitong Injection (XST), a Chinese medicine consisting of the total saponins from Panax notoginseng (Burk.) F. H. Chen (Chinese Sanqi). A network-based approach was developed to combine DEGs related to cardiovascular diseases (CVD) with lines of evidence from the literature mining to investigate the mechanism of action (MOA) of XST on antimyocardial infarction. A compound-target-pathway network of XST was constructed by connecting compounds to DEGs validated with literature lines of evidence and the pathways that are functionally enriched. Seventy potential targets of XST were identified in this study, of which 32 were experimentally validated either by our in vitro assays or by CVD-related literatures. This study provided for the first time a network view on the complex MOA of antimyocardial infarction through multiple targets and pathways.

Aisha Lateef,  Kong-Bing Tan,  Tang Ching Lau (2009)
Acute generalized exanthematous pustulosis (AGEP) and toxic epidermal necrolysis (TEN) are both severe cutaneous adverse reactions, mostly to drugs. Although predominantly involving skin, they differ significantly in presentations, prognosis, pathology, immunogenesis, and treatment. They have very rarely been described to occur simultaneously in a patient, manifesting as AGEP-TEN overlap. We describe a 67-year-old Chinese lady with systemic lupus erythematosus who presented with features of AGEP but evolved to AGEP-TEN overlap as an adverse reaction to hydroxychloroquine (HCQ) treatment. This case is the first reported case of AGEP-TEN overlap secondary to HCQ and highlights the need for constant surveillance for rare adverse events that may manifest even after decades of use of the drug worldwide.