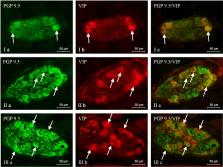 Bisphenol A (BPA) is used in the production of plastics approved for contact with feed and food. Upon entering living organisms, BPA, as a potent endocrine disruptor, negatively affects various internal organs and regulatory systems, especially in young individuals. Although previous studies have described the neurotoxic effects of BPA on various tissues, it should be underlined that the putative influence of this substance on the chemical architecture of the urinary bladder intrinsic innervation has not yet been studied. One of the most important neuronal substances involved in the regulation of urinary bladder functions is vasoactive intestinal polypeptide (VIP), which primarily participates in the regulation of muscular activity and blood flow. Therefore, this study aimed to determine the influence of various doses of BPA on the distribution pattern of VIP-positive neural structures located in the wall of the porcine urinary bladder trigone using the double-immunofluorescence method. The obtained results show that BPA influence leads to an increase in the number of both neurons and nerve fibres containing VIP in the porcine urinary bladder trigone. This may indicate that VIP participates in adaptive processes of the urinary bladder evoked by BPA.

Bisphenol A and human health: a review of the literature.

Johanna Rochester (2013)
There is growing evidence that bisphenol A (BPA) may adversely affect humans. BPA is an endocrine disruptor that has been shown to be harmful in laboratory animal studies. Until recently, there were relatively few epidemiological studies examining the relationship between BPA and health effects in humans. However, in the last year, the number of these studies has more than doubled. A comprehensive literature search found 91 studies linking BPA to human health; 53 published within the last year. This review outlines this body of literature, showing associations between BPA exposure and adverse perinatal, childhood, and adult health outcomes, including reproductive and developmental effects, metabolic disease, and other health effects. These studies encompass both prenatal and postnatal exposures, and include several study designs and population types. While it is difficult to make causal links with epidemiological studies, the growing human literature correlating environmental BPA exposure to adverse effects in humans, along with laboratory studies in many species including primates, provides increasing support that environmental BPA exposure can be harmful to humans, especially in regards to behavioral and other effects in children. Copyright © 2013 Elsevier Inc. All rights reserved.

Human exposure to bisphenol A (BPA).

Laura Vandenberg,  Russ Hauser,  Michele Marcus … (2015)
The plastic monomer and plasticizer bisphenol A (BPA) is one of the highest volume chemicals produced worldwide. BPA is used in the production of polycarbonate plastics and epoxy resins used in many consumer products. Here, we have outlined studies that address the levels of BPA in human tissues and fluids. We have reviewed the few epidemiological studies available that explore biological markers of BPA exposure and human health outcomes. We have examined several studies of levels of BPA released from consumer products as well as the levels measured in wastewater, drinking water, air and dust. Lastly, we have reviewed acute metabolic studies and the information available about BPA metabolism in animal models. The reported levels of BPA in human fluids are higher than the BPA concentrations reported to stimulate molecular endpoints in vitro and appear to be within an order of magnitude of the levels needed to induce effects in animal models.

How much do resin-based dental materials release? A meta-analytical approach.

Alex de Crespigny,  B Geebelen,  Johannes van Goudoever … (2011)
Resin-based dental materials are not inert in the oral environment, and may release components, initially due to incomplete polymerization, and later due to degradation. Since there are concerns regarding potential toxicity, more precise knowledge of the actual quantity of released eluates is necessary. However, due to a great variety in analytical methodology employed in different studies and in the presentation of the results, it is still unclear to which quantities of components a patient may be exposed. The objective of this meta-analytical study was to review the literature on the short- and long-term release of components from resin-based dental materials, and to determine how much (order of magnitude) of those components may leach out in the oral cavity. Out of an initial set of 71 studies, 22 were included. In spite of the large statistical incertitude due to the great variety in methodology and lack of complete information (detection limits were seldom mentioned), a meta-analytical mean for the evaluated eluates was calculated. To relate the amount of potentially released material components with the size of restorations, the mean size of standard composite restorations was estimated using a 3D graphical program. While the release of monomers was analyzed in many studies, that of additives, such as initiators, inhibitors and stabilizers, was seldom investigated. Significantly more components were found to be released in organic than in water-based media. Resin-based dental materials might account for the total burden of orally ingested bisphenol A, but they may release even higher amounts of monomers, such as HEMA, TEGDMA, BisGMA and UDMA. Compared to these monomers, similar or even higher amounts of additives may elute, even though composites generally only contain very small amounts of additives. A positive correlation was found between the total quantity of released eluates and the volume of extraction solution. There is a clear need for more accurate and standardized analytical research to determine the long-term release from resin-based materials. Several guidelines for standardization are proposed. Copyright © 2011 Academy of Dental Materials. Published by Elsevier Ltd. All rights reserved.