Role of PI3K/AKT pathway in cancer: the framework of malignant behavior 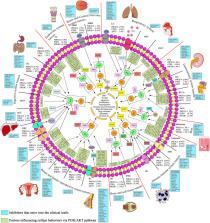 Given that the PI3K/AKT pathway has manifested its compelling influence on multiple cellular process, we further review the roles of hyperactivation of PI3K/AKT pathway in various human cancers. We state the abnormalities of PI3K/AKT pathway in different cancers, which are closely related with tumorigenesis, proliferation, growth, apoptosis, invasion, metastasis, epithelial–mesenchymal transition, stem-like phenotype, immune microenvironment and drug resistance of cancer cells. In addition, we investigated the current clinical trials of inhibitors against PI3K/AKT pathway in cancers and found that the clinical efficacy of these inhibitors as monotherapy has so far been limited despite of the promising preclinical activity, which means combinations of targeted therapy may achieve better efficacies in cancers. In short, we hope to feature PI3K/AKT pathway in cancers to the clinic and bring the new promising to patients for targeted therapies.

N. Agrawal,  M Frederick,  C. R. Pickering … (2011)
Head and neck squamous cell carcinoma (HNSCC) is the sixth most common cancer worldwide. To explore the genetic origins of this cancer, we used whole-exome sequencing and gene copy number analyses to study 32 primary tumors. Tumors from patients with a history of tobacco use had more mutations than did tumors from patients who did not use tobacco, and tumors that were negative for human papillomavirus (HPV) had more mutations than did HPV-positive tumors. Six of the genes that were mutated in multiple tumors were assessed in up to 88 additional HNSCCs. In addition to previously described mutations in TP53, CDKN2A, PIK3CA, and HRAS, we identified mutations in FBXW7 and NOTCH1. Nearly 40% of the 28 mutations identified in NOTCH1 were predicted to truncate the gene product, suggesting that NOTCH1 may function as a tumor suppressor gene rather than an oncogene in this tumor type.

The protein kinase encoded by the Akt proto-oncogene is a target of the PDGF-activated phosphatidylinositol 3-kinase.

Andrew T. Chan,  Philip N. Tsichlis,  A Kazlauskas … (1995)
The serine/threonine protein kinase encoded by the Akt proto-oncogene is catalytically inactive in serum-starved primary and immortalized fibroblasts. Here we show that Akt and the Akt-related kinase AKT2 are activated by PDGF. The activation was rapid and specific, and it was abrogated by mutations in the Akt Pleckstrin homology (PH) domain. The Akt activation was also shown to depend on PDGFR beta tyrosines Y740 and Y751, which bind phosphatidylinositol 3-kinase (PI 3-kinase) upon phosphorylation. Moreover, Akt activation was blocked by the PI 3-kinase-specific inhibitor wortmannin and the dominant inhibitory N17Ras. Conversely, Akt activity was induced following the addition of phosphatidylinositol-3-phosphate to Akt immunoprecipitates from serum-starved cells in vitro. These results identify Akt as a novel target of PI 3-kinase and suggest that the Akt PH domain may be a mediator of PI 3-kinase signaling.