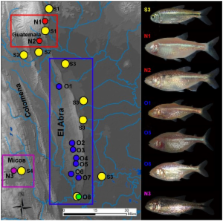 Cave animals converge evolutionarily on a suite of troglomorphic traits, the best known of which are eyelessness and depigmentation. We studied 11 cave and 10 surface populations of Astyanax mexicanus in order to better understand the evolutionary origins of the cave forms, the basic genetic structuring of both cave and surface populations, and the degree to which present day migration among them affects their genetic divergence.

Cave populations of this species are derived from two different surface stocks denoted "old" and "new." The old stock colonized caves at least three times independently while the new stock colonized caves at least twice independently. Thus, the similar cave phenotypes found in these caves are the result of repeated convergences. These phenotypic convergences have occurred in spite of gene flow from surface populations suggesting either strong natural or sexual selection for alleles responsible for the cave phenotype in the cave environment.

Maximum likelihood estimation of a migration matrix and effective population sizes in n subpopulations by using a coalescent approach.

P Beerli,  J Felsenstein (2001)
A maximum likelihood estimator based on the coalescent for unequal migration rates and different subpopulation sizes is developed. The method uses a Markov chain Monte Carlo approach to investigate possible genealogies with branch lengths and with migration events. Properties of the new method are shown by using simulated data from a four-population n-island model and a source-sink population model. Our estimation method as coded in migrate is tested against genetree; both programs deliver a very similar likelihood surface. The algorithm converges to the estimates fairly quickly, even when the Markov chain is started from unfavorable parameters. The method was used to estimate gene flow in the Nile valley by using mtDNA data from three human populations.

Mark A. Dickson,  Raju S V Balabhadra,  Pamela Colosimo … (2005)
Major phenotypic changes evolve in parallel in nature by molecular mechanisms that are largely unknown. Here, we use positional cloning methods to identify the major chromosome locus controlling armor plate patterning in wild threespine sticklebacks. Mapping, sequencing, and transgenic studies show that the Ectodysplasin (EDA) signaling pathway plays a key role in evolutionary change in natural populations and that parallel evolution of stickleback low-plated phenotypes at most freshwater locations around the world has occurred by repeated selection of Eda alleles derived from an ancestral low-plated haplotype that first appeared more than two million years ago. Members of this clade of low-plated alleles are present at low frequencies in marine fish, which suggests that standing genetic variation can provide a molecular basis for rapid, parallel evolution of dramatic phenotypic change in nature.