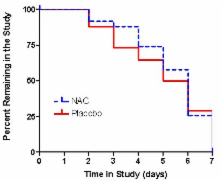 Prophylactic treatment with N-acetylcysteine (NAC) for 3 months or more is associated with a reduction in the frequency of exacerbations of chronic obstructive pulmonary disease (COPD). This raises the question of whether treatment with NAC during an acute exacerbation will hasten recovery from the exacerbation.

We have examined this in a randomised, double-blind, placebo controlled trial. Subjects, admitted to hospital with an acute exacerbation of COPD, were randomised within 24 h of admission to treatment with NAC 600 mg b.d. (n = 25) or matching placebo (n = 25). Treatment continued for 7 days or until discharge (whichever occurred first). To be eligible subjects had to be ≥ 50 years, have an FEV 1 ≤ 60% predicted, FEV 1/VC ≤ 70% and ≥ 10 pack year smoking history. Subjects with asthma, heart failure, pneumonia and other respiratory diseases were excluded. All subjects received concurrent treatment with prednisone 40 mg/day, nebulised salbutamol 5 mg q.i.d and where appropriate antibiotics. FEV 1, VC, SaO 2 and breathlessness were measured 2 hours after a dose of nebulised salbutamol, at the same time each day. Breathlessness was measured on a seven point Likert scale.

At baseline FEV 1 (% predicted) was 22% in the NAC group and 24% in the control group. There was no difference between the groups in the rate of change of FEV 1, VC, SaO 2 or breathlessness. Nor did the groups differ in the median length of stay in hospital (6 days for both groups).

Addition of NAC to treatment with corticosteroids and bronchodilators does not modify the outcome in acute exacerbations of COPD.

Claire L. Davies,  Peter M A Calverley,  Elizabeth Angus (1999)
The role of oral corticosteroids in treating patients with exacerbations of chronic obstructive pulmonary disease (COPD) remains contentious. We assessed in a prospective, randomised, double-blind, placebo-controlled trial the effects of oral corticosteroid therapy in patients with exacerbations of COPD requiring hospital admission. We recruited patients with non-acidotic exacerbations of COPD who were randomly assigned oral prednisolone 30 mg once daily (n=29) or identical placebo (n=27) for 14 days, in addition to standard treatment with nebulised bronchodilators, antibiotics, and oxygen. We did spirometry and recorded symptom scores daily in inpatients. Time to discharge and withdrawals were noted in each group. We recalled patients at 6 weeks to repeat spirometry and collect data on subsequent exacerbations and treatment. Hospital stay was analysed by intention to treat and forced expiratory volume in 1 s (FEV1) according to protocol. FEV1 after bronchodilation increased more rapidly and to a greater extent in the corticosteroid-treated group: percentage predicted FEV1 after bronchodilation rose from 25.7% (95% CI 21.0-30.4) to 32.2% (27.3-27.1) in the placebo group (p<0.0001) compared with 28.2% (23.5-32.9) to 41.5% (35.8-47.2) in the corticosteroid-treated group (p<0.0001). Up to day 5 of hospital stay, FEV1 after bronchodilation increased by 90 mL daily (50.8-129.2) and by 30 mL daily (10.4-49.6) in the placebo group (p=0.039). Hospital stays were shorter in the corticosteroid-treated group. Groups did not differ at 6-week follow-up. These data provide evidence to support the current practice of prescribing low-dose oral corticosteroids to all patients with non-acidotic exacerbations of COPD requiring hospital admission.