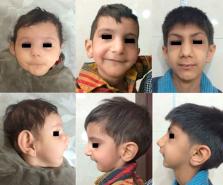 In this study, 29 cases from 23 unrelated Arab kindreds with permanent hypoparathyroidism and dysmorphism indicating Sanjad-Sakati syndrome were enrolled for 10 years in the southwest of Iran. The mutational analysis by direct sequencing of the tubulin folding cofactor E gene was performed for the patients and their families, as well as their fetuses using genomic DNA.

Twenty-eight out of 29 cases had parental consanguinity. Twenty-seven cases presented with hypocalcemia seizure and two were referred because of poor weight gain and were found to have asymptomatic hypocalcemia. The dysmorphic features, hypocalcemia in the setting of low to normal parathyroid hormone levels and high phosphorus led to the diagnosis of these cases. Sequencing analysis of the tubulin folding cofactor E gene revealed a homozygous 12-bp deletion (c.155–166del) for all patients. Following that, prenatal diagnosis was performed for eight families, and two fetuses with a homozygous 12-bp deletion were identified.

These results make it much easier and faster to diagnose this syndrome from other similar dysmorphisms and also help to detect carriers, as well as prenatal diagnosis of Sanjad-Sakati syndrome in high-risk families in this population.

Sue Richards, Nazneen Aziz, Sherri Bale … (2015)
The American College of Medical Genetics and Genomics (ACMG) previously developed guidance for the interpretation of sequence variants. 1 In the past decade, sequencing technology has evolved rapidly with the advent of high-throughput next generation sequencing. By adopting and leveraging next generation sequencing, clinical laboratories are now performing an ever increasing catalogue of genetic testing spanning genotyping, single genes, gene panels, exomes, genomes, transcriptomes and epigenetic assays for genetic disorders. By virtue of increased complexity, this paradigm shift in genetic testing has been accompanied by new challenges in sequence interpretation. In this context, the ACMG convened a workgroup in 2013 comprised of representatives from the ACMG, the Association for Molecular Pathology (AMP) and the College of American Pathologists (CAP) to revisit and revise the standards and guidelines for the interpretation of sequence variants. The group consisted of clinical laboratory directors and clinicians. This report represents expert opinion of the workgroup with input from ACMG, AMP and CAP stakeholders. These recommendations primarily apply to the breadth of genetic tests used in clinical laboratories including genotyping, single genes, panels, exomes and genomes. This report recommends the use of specific standard terminology: ‘pathogenic’, ‘likely pathogenic’, ‘uncertain significance’, ‘likely benign’, and ‘benign’ to describe variants identified in Mendelian disorders. Moreover, this recommendation describes a process for classification of variants into these five categories based on criteria using typical types of variant evidence (e.g. population data, computational data, functional data, segregation data, etc.). Because of the increased complexity of analysis and interpretation of clinical genetic testing described in this report, the ACMG strongly recommends that clinical molecular genetic testing should be performed in a CLIA-approved laboratory with results interpreted by a board-certified clinical molecular geneticist or molecular genetic pathologist or equivalent.

D Canceill, E Viguera, S D Ehrlich (2001)
Genome rearrangements can take place by a process known as replication slippage or copy-choice recombination. The slippage occurs between repeated sequences in both prokaryotes and eukaryotes, and is invoked to explain microsatellite instability, which is related to several human diseases. We analysed the molecular mechanism of slippage between short direct repeats, using in vitro replication of a single-stranded DNA template that mimics the lagging strand synthesis. We show that slippage involves DNA polymerase pausing, which must take place within the direct repeat, and that the pausing polymerase dissociates from the DNA. We also present evidence that, upon polymerase dissociation, only the terminal portion of the newly synthesized strand separates from the template and anneals to another direct repeat. Resumption of DNA replication then completes the slippage process.

Consanguinity and reproductive health among Arabs

Ghazi Tadmouri, Pratibha Nair, Tasneem Obeid … (2009)
Consanguineous marriages have been practiced since the early existence of modern humans. Until now consanguinity is widely practiced in several global communities with variable rates depending on religion, culture, and geography. Arab populations have a long tradition of consanguinity due to socio-cultural factors. Many Arab countries display some of the highest rates of consanguineous marriages in the world, and specifically first cousin marriages which may reach 25-30% of all marriages. In some countries like Qatar, Yemen, and UAE, consanguinity rates are increasing in the current generation. Research among Arabs and worldwide has indicated that consanguinity could have an effect on some reproductive health parameters such as postnatal mortality and rates of congenital malformations. The association of consanguinity with other reproductive health parameters, such as fertility and fetal wastage, is controversial. The main impact of consanguinity, however, is an increase in the rate of homozygotes for autosomal recessive genetic disorders. Worldwide, known dominant disorders are more numerous than known recessive disorders. However, data on genetic disorders in Arab populations as extracted from the Catalogue of Transmission Genetics in Arabs (CTGA) database indicate a relative abundance of recessive disorders in the region that is clearly associated with the practice of consanguinity.