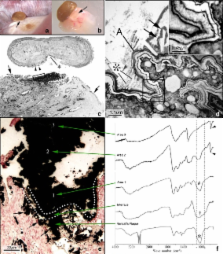 All stones share similar presenting symptoms, and urine supersaturation with respect to the mineral phase of the stone is essential for stone formation. However, recent studies using papillary biopsies of stone formers have provided a view of the histology of renal crystal deposition which suggests that the early sequence of events leading to stone formation differs greatly, depending on the type of stone and on the urine chemistry leading to supersaturation. Three general pathways for kidney stone formation are seen: (1) stones fixed to the surface of a renal papilla at sites of interstitial apatite plaque (termed Randall’s plaque), as seen in idiopathic calcium oxalate stone formers; (2) stones attached to plugs protruding from the openings of ducts of Bellini, as seen in hyperoxaluria and distal tubular acidosis; and (3) stones forming in free solution in the renal collection system, as in cystinuria. The presence of hydroxyapatite crystals in either the interstitial or tubule compartment (and sometimes both) of the renal medulla in stone formers is the rule and has implications for the initial steps of stone formation and the potential for renal injury.

Margaret Pearle,  Elizabeth Calhoun,  Gary Curhan (2005)
We quantified the burden of urolithiasis in the United States by identifying trends in the use of health care resources and estimating the economic impact of the disease. The analytical methods used to generate these results have been described previously. The rate of national inpatient hospitalizations for a diagnosis of urolithiasis decreased by 15% and hospital length of stay decreased from 2.6 to 2.2 days between 1994 and 2000. Rates of hospitalization were 2.5 to 3-fold higher for Medicare beneficiaries with little change between 1992 and 1998. Almost 2 million outpatient visits for a primary diagnosis of urolithiasis were recorded in 2000. Hospital outpatient visits increased by 40% between 1994 and 2000 and physician office visits increased by 43% between 1992 and 2000. In the Medicare population hospital outpatient and office visits increased by 29% and 41%, respectively, between 1992 and 1998. The distribution of surgical procedures remained relatively stable through the 1990s. Shock wave lithotripsy was the most commonly performed procedure, followed closely by ureteroscopy. Overall the total estimated annual expenditure for individuals with claims for a diagnosis of urolithiasis was almost $2.1 billion in 2000, representing a 50% increase since 1994. The cost of urolithiasis is estimated at almost $2 billion annually and it appears to be increasing with time despite a shift in inpatient to outpatient treatment and the emergence of minimally invasive treatment modalities, perhaps because the prevalence of stone disease is increasing.

Randall's plaque of patients with nephrolithiasis begins in basement membranes of thin loops of Henle.

Marc Grynpas,  J Lingeman,  Ralf Sommer … (2003)
Our purpose here is to test the hypothesis that Randall's plaques, calcium phosphate deposits in kidneys of patients with calcium renal stones, arise in unique anatomical regions of the kidney, their formation conditioned by specific stone-forming pathophysiologies. To test this hypothesis, we performed intraoperative biopsies of plaques in kidneys of idiopathic-calcium-stone formers and patients with stones due to obesity-related bypass procedures and obtained papillary specimens from non-stone formers after nephrectomy. Plaque originates in the basement membranes of the thin loops of Henle and spreads from there through the interstitium to beneath the urothelium. Patients who have undergone bypass surgery do not produce such plaque but instead form intratubular hydroxyapatite crystals in collecting ducts. Non-stone formers also do not form plaque. Plaque is specific to certain kinds of stone-forming patients and is initiated specifically in thin-limb basement membranes by mechanisms that remain to be elucidated.

Climate-related increase in the prevalence of urolithiasis in the United States.

Margaret Pearle,  Yair Lotan,  Tom H Brikowski (2008)
An unanticipated result of global warming is the likely northward expansion of the present-day southeastern U.S. kidney stone "belt." The fraction of the U.S. population living in high-risk zones for nephrolithiasis will grow from 40% in 2000 to 56% by 2050, and to 70% by 2095. Predictions based on a climate model of intermediate severity warming (SRESa1b) indicate a climate-related increase of 1.6-2.2 million lifetime cases of nephrolithiasis by 2050, representing up to a 30% increase in some climate divisions. Nationwide, the cost increase associated with this rise in nephrolithiasis would be $0.9-1.3 billion annually (year-2000 dollars), representing a 25% increase over current expenditures. The impact of these changes will be geographically concentrated, depending on the precise relationship between temperature and stone risk. Stone risk may abruptly increase at a threshold temperature (nonlinear model) or increase steadily with temperature change (linear model) or some combination thereof. The linear model predicts increases by 2050 that are concentrated in California, Texas, Florida, and the Eastern Seaboard; the nonlinear model predicts concentration in a geographic band stretching from Kansas to Kentucky and Northern California, immediately south of the threshold isotherm.