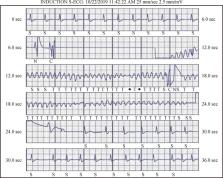 The proarrhythmic potential of implantable cardioverter-defibrillators.

S L Pinski,  Samantha Fahy (1995)
The implantable cardioverter-defibrillator (ICD) is remarkably effective in preventing sudden cardiac death in high-risk patients, but it also has the capacity to provoke or worsen cardiac arrhythmias. Tachyarrhythmias or bradyarrhythmias may result from the delivery of antitachycardia or antibradycardia therapies by tiered-therapy defibrillators. This proarrhythmia, although rarely fatal, increases the morbidity associated with defibrillator therapy. Proarrhythmia is related as much to suboptimal programming as to technical limitations of the device. The proarrhythmic potential of ICD therapy can be minimized by tailoring the "electrical prescription" according to characteristics of the clinical arrhythmia and individual ICD idiosyncrasies.

Efficacy and safety of the subcutaneous implantable cardioverter defibrillator: a systematic review