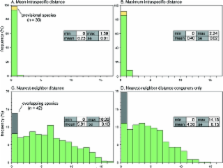 DNA barcoding seeks to assemble a standardized reference library for DNA-based identification of eukaryotic species. The utility and limitations of this approach need to be tested on well-characterized taxonomic assemblages. Here we provide a comprehensive DNA barcode analysis for North American birds including 643 species representing 93% of the breeding and pelagic avifauna of the USA and Canada. Most (94%) species possess distinct barcode clusters, with average neighbour-joining bootstrap support of 98%. In the remaining 6%, barcode clusters correspond to small sets of closely related species, most of which hybridize regularly. Fifteen (2%) currently recognized species are comprised of two distinct barcode clusters, many of which may represent cryptic species. Intraspecific variation is weakly related to census population size and species age. This study confirms that DNA barcoding can be effectively applied across the geographical and taxonomic expanse of North American birds. The consistent finding of constrained intraspecific mitochondrial variation in this large assemblage of species supports the emerging view that selective sweeps limit mitochondrial diversity.

A simple method for estimating evolutionary rates of base substitutions through comparative studies of nucleotide sequences.

Motoo Kimura (1980)
Some simple formulae were obtained which enable us to estimate evolutionary distances in terms of the number of nucleotide substitutions (and, also, the evolutionary rates when the divergence times are known). In comparing a pair of nucleotide sequences, we distinguish two types of differences; if homologous sites are occupied by different nucleotide bases but both are purines or both pyrimidines, the difference is called type I (or "transition" type), while, if one of the two is a purine and the other is a pyrimidine, the difference is called type II (or "transversion" type). Letting P and Q be respectively the fractions of nucleotide sites showing type I and type II differences between two sequences compared, then the evolutionary distance per site is K = -(1/2) ln [(1-2P-Q) square root of 1-2Q]. The evolutionary rate per year is then given by k = K/(2T), where T is the time since the divergence of the two sequences. If only the third codon positions are compared, the synonymous component of the evolutionary base substitutions per site is estimated by K'S = -(1/2) ln (1-2P-Q). Also, formulae for standard errors were obtained. Some examples were worked out using reported globin sequences to show that synonymous substitutions occur at much higher rates than amino acid-altering substitutions in evolution.

S. KUMAR (2004)
With its theoretical basis firmly established in molecular evolutionary and population genetics, the comparative DNA and protein sequence analysis plays a central role in reconstructing the evolutionary histories of species and multigene families, estimating rates of molecular evolution, and inferring the nature and extent of selective forces shaping the evolution of genes and genomes. The scope of these investigations has now expanded greatly owing to the development of high-throughput sequencing techniques and novel statistical and computational methods. These methods require easy-to-use computer programs. One such effort has been to produce Molecular Evolutionary Genetics Analysis (MEGA) software, with its focus on facilitating the exploration and analysis of the DNA and protein sequence variation from an evolutionary perspective. Currently in its third major release, MEGA3 contains facilities for automatic and manual sequence alignment, web-based mining of databases, inference of the phylogenetic trees, estimation of evolutionary distances and testing evolutionary hypotheses. This paper provides an overview of the statistical methods, computational tools, and visual exploration modules for data input and the results obtainable in MEGA.

Paul Hebert,  Paul Ward,  Jordan D. Ward … (2005)
Two hundred and seven species of fish, mostly Australian marine fish, were sequenced (barcoded) for a 655 bp region of the mitochondrial cytochrome oxidase subunit I gene (cox1). Most species were represented by multiple specimens, and 754 sequences were generated. The GC content of the 143 species of teleosts was higher than the 61 species of sharks and rays (47.1% versus 42.2%), largely due to a higher GC content of codon position 3 in the former (41.1% versus 29.9%). Rays had higher GC than sharks (44.7% versus 41.0%), again largely due to higher GC in the 3rd codon position in the former (36.3% versus 26.8%). Average within-species, genus, family, order and class Kimura two parameter (K2P) distances were 0.39%, 9.93%, 15.46%, 22.18% and 23.27%, respectively. All species could be differentiated by their cox1 sequence, although single individuals of each of two species had haplotypes characteristic of a congener. Although DNA barcoding aims to develop species identification systems, some phylogenetic signal was apparent in the data. In the neighbour-joining tree for all 754 sequences, four major clusters were apparent: chimaerids, rays, sharks and teleosts. Species within genera invariably clustered, and generally so did genera within families. Three taxonomic groups-dogfishes of the genus Squalus, flatheads of the family Platycephalidae, and tunas of the genus Thunnus-were examined more closely. The clades revealed after bootstrapping generally corresponded well with expectations. Individuals from operational taxonomic units designated as Squalus species B through F formed individual clades, supporting morphological evidence for each of these being separate species. We conclude that cox1 sequencing, or 'barcoding', can be used to identify fish species.