Adherence to recommended clinical guidelines in extensive disease small-cell lung cancer across the US, Europe, and Japan 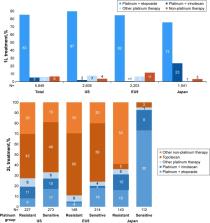 This study compared real-world treatment patterns of patients with extensive disease small-cell lung cancer (ED-SCLC) across regions and by platinum resistance/platinum sensitivity (PR/PS) and established if these patterns were in line with published guidelines.

The data source was the Oncology Monitor, a global database using retrospective medical chart reviews of oncology patients treated with anticancer drugs. All patients diagnosed with ED-SCLC from January 2014 through December 2016 in the US, and in France, Germany, Italy, Spain, and the UK (European Union; EU5), and Japan were included.

In contrast to treatment guidelines, a significant proportion of real-world PR patients were re-challenged with a 2L platinum-based therapy, while conversely, many PS patients did not receive platinum-based therapies in 2L. This study highlights a lack of a consistent paradigm for 2L ED-SCLC treatment, limited therapeutic options, and an unmet need among SCLC patients.

Small cell lung cancer: where do we go from here?

Lauren Averett Byers,  Charles Rudin (2015)
Small cell lung cancer (SCLC) is an aggressive disease that accounts for approximately 14% of all lung cancers. In the United States, approximately 31,000 patients are diagnosed annually with SCLC. Despite numerous clinical trials, including at least 40 phase 3 trials since the 1970s, systemic treatment for patients with SCLC has not changed significantly in the past several decades. Consequently, the 5-year survival rate remains low at <7% overall, and most patients survive for only 1 year or less after diagnosis. Unlike nonsmall cell lung cancer (NSCLC), in which major advances have been made using targeted therapies, there are still no approved targeted drugs for SCLC. Significant barriers to progress in SCLC include 1) a lack of early detection modalities, 2) limited tumor tissue for translational research (eg, molecular profiling of DNA, RNA, and/or protein alterations) because of small diagnostic biopsies and the rare use of surgical resection in standard treatment, and 3) rapid disease progression with poor understanding of the mechanisms contributing to therapeutic resistance. In this report, the authors review the current state of SCLC treatment, recent advances in current understanding of the underlying disease biology, and opportunities to advance translational research and therapeutic approaches for patients with SCLC.