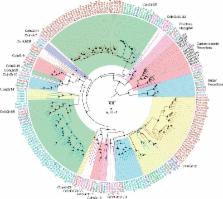 The wheat stem sawfly, Cephus cinctus, is a major pest of wheat and key ecological player in the grasslands of western North America. It also represents the distinctive Cephoidea superfamily of sawflies (Symphyta) that appeared early during the hymenopteran radiation, but after three early-branching eusymphytan superfamilies that form the base of the order Hymenoptera. We present a high-quality draft genome assembly of 162 Mb in 1,976 scaffolds with a scaffold N50 of 622 kb. Automated gene annotation identified 11,210 protein-coding gene models and 1,307 noncoding RNA models. Thirteen percent of the assembly consists of ∼58,000 transposable elements partitioned equally between Class-I and Class-II elements. Orthology analysis reveals that 86% of Cephus proteins have identifiable orthologs in other insects. Phylogenomic analysis of conserved subsets of these proteins supports the placement of the Cephoidea between the Eusymphyta and the parasitic woodwasp superfamily Orussoidea. Manual annotation and phylogenetic analysis of families of odorant, gustatory, and ionotropic receptors, plus odorant-binding proteins, shows that Cephus has representatives for most conserved and expanded gene lineages in the Apocrita (wasps, ants, and bees). Cephus has also maintained several insect gene lineages that have been lost from the Apocrita, most prominently the carbon dioxide receptor subfamily. Furthermore, Cephus encodes a few small lineage-specific chemoreceptor gene family expansions that might be involved in adaptations to new grasses including wheat. These comparative analyses identify gene family members likely to have been present in the hymenopteran ancestor and provide a new perspective on the evolution of the chemosensory gene repertoire.

Evgeny Zdobnov,  Fredrik Tegenfeldt,  Dmitry Kuznetsov … (2016)
OrthoDB is a comprehensive catalog of orthologs, genes inherited by extant species from a single gene in their last common ancestor. In 2016 OrthoDB reached its 9th release, growing to over 22 million genes from over 5000 species, now adding plants, archaea and viruses. In this update we focused on usability of this fast-growing wealth of data: updating the user and programmatic interfaces to browse and query the data, and further enhancing the already extensive integration of available gene functional annotations. Collating functional annotations from over 100 resources, and enabled us to propose descriptive titles for 87% of ortholog groups. Additionally, OrthoDB continues to provide computed evolutionary annotations and to allow user queries by sequence homology. The OrthoDB resource now enables users to generate publication-quality comparative genomics charts, as well as to upload, analyze and interactively explore their own private data. OrthoDB is available from http://orthodb.org.

Data deposition: This project has been submitted to the National Center for Biotechnology Information (NCBI) as BioProjects PRJNA297591 and PRJNA168335 (NCBI GCF_000341935.1), and all the Sequence Read Archive raw read accessions are listed in supplementary table S1, Supplementary Material online.