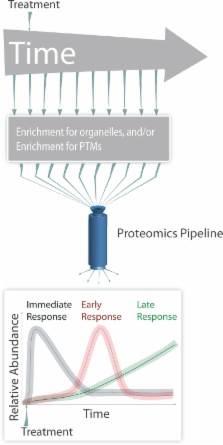 The global analysis of protein composition, modifications, and dynamics are important goals in cell biology. Mass spectrometry (MS)–based proteomics has matured into an attractive technology for this purpose. Particularly, high resolution MS methods have been extremely successful for quantitative analysis of cellular and organellar proteomes. Rapid advances in all areas of the proteomic workflow, including sample preparation, MS, and computational analysis, should make the technology more easily available to a broad community and turn it into a staple methodology for cell biologists.

Stable isotope labeling by amino acids in cell culture, SILAC, as a simple and accurate approach to expression proteomics.

Shao-En Ong,  Matthias Mann,  Irina Kratchmarova … (2002)
Quantitative proteomics has traditionally been performed by two-dimensional gel electrophoresis, but recently, mass spectrometric methods based on stable isotope quantitation have shown great promise for the simultaneous and automated identification and quantitation of complex protein mixtures. Here we describe a method, termed SILAC, for stable isotope labeling by amino acids in cell culture, for the in vivo incorporation of specific amino acids into all mammalian proteins. Mammalian cell lines are grown in media lacking a standard essential amino acid but supplemented with a non-radioactive, isotopically labeled form of that amino acid, in this case deuterated leucine (Leu-d3). We find that growth of cells maintained in these media is no different from growth in normal media as evidenced by cell morphology, doubling time, and ability to differentiate. Complete incorporation of Leu-d3 occurred after five doublings in the cell lines and proteins studied. Protein populations from experimental and control samples are mixed directly after harvesting, and mass spectrometric identification is straightforward as every leucine-containing peptide incorporates either all normal leucine or all Leu-d3. We have applied this technique to the relative quantitation of changes in protein expression during the process of muscle cell differentiation. Proteins that were found to be up-regulated during this process include glyceraldehyde-3-phosphate dehydrogenase, fibronectin, and pyruvate kinase M2. SILAC is a simple, inexpensive, and accurate procedure that can be used as a quantitative proteomic approach in any cell culture system.

Ronald C Beavis,  Robertson Craig (2004)
Tandem mass spectra obtained from fragmenting peptide ions contain some peptide sequence specific information, but often there is not enough information to sequence the original peptide completely. Several proprietary software applications have been developed to attempt to match the spectra with a list of protein sequences that may contain the sequence of the peptide. The application TANDEM was written to provide the proteomics research community with a set of components that can be used to test new methods and algorithms for performing this type of sequence-to-data matching. The source code and binaries for this software are available at http://www.proteome.ca/opensource.html, for Windows, Linux and Macintosh OSX. The source code is made available under the Artistic License, from the authors.