Electromagnetic Field Therapy: A Rehabilitative Perspective in the Management of Musculoskeletal Pain – A Systematic Review 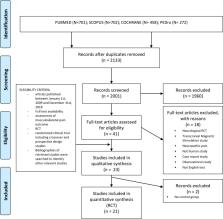 A Clinical Method of Functional Assessment of the Shoulder

Pain terms: a list with definitions and notes on usage. Recommended by the IASP Subcommittee on Taxonomy.

M Ellman,  G Hanker,  Emmanuelle M. Bayer (1986)
In fifty patients who had fifty tears of the rotator cuff that had been repaired, we correlated the preoperative findings by history, physical examination, and radiography with the operative findings, the difficulty of the repair, and the results after an average follow-up of 3.5 years. The results, which were rated on the basis of pain, function, range of motion, strength, and satisfaction of the patient, were satisfactory in 84 per cent and unsatisfactory in 16 per cent. The correlations of the preoperative findings with the results showed that pain and functional impairment, the primary indications for repair, were significantly relieved. The longer the duration of pain was preoperatively, the larger the cuff tear and the more difficult the repair were. The strength of abduction and of external rotation before repair was of prognostic value: the greater the weakness, the poorer the result. The poorest results were in patients with strength ratings of grade 3 or less. Limitation of active motion preoperatively was also of prognostic value: in patients who were unable to abduct the shoulder beyond 100 degrees preoperatively, there was an increased risk of a poor result. An acromiohumeral distance of seven millimeters or less (measured on the anteroposterior radiograph) suggested a larger tear and the likelihood that after repair there would be less strength in flexion, less active motion, and lower scores. Single or double-contrast arthrography was not consistently accurate in estimating the size of the tear. After so-called watertight repair and anterior acromioplasty, successful results can be anticipated in a high percentage of patients.