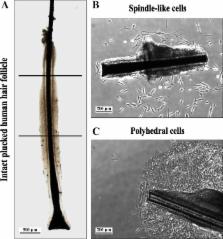 Stem cells from the adult hair follicle bulge can differentiate into neurons and glia, which is advantageous for the development of an autologous cell-based therapy for neurological diseases. Consequently, bulge stem cells from plucked hair may increase opportunities for personalized neuroregenerative therapy. Hairs were plucked from the scalps of healthy donors, and the bulges were cultured without prior tissue treatment. Shortly after outgrowth from the bulge, cellular protein expression was established immunohistochemically. The doubling time was calculated upon expansion, and the viability of expanded, cryopreserved cells was assessed after shear stress. The neuroglial differentiation potential was assessed from cryopreserved cells. Shortly after outgrowth, the cells were immunopositive for nestin, SLUG, AP-2α and SOX9, and negative for SOX10. Each bulge yielded approximately 1 × 10 4 cells after three passages. Doubling time was 3.3 (±1.5) days. Cellular viability did not differ significantly from control cells after shear stress. The cells expressed class III β-tubulin (TUBB3) and synapsin-1 after 3 weeks of neuronal differentiation. Glial differentiation yielded KROX20- and MPZ-immunopositive cells after 2 weeks. We demonstrated that human hair follicle bulge-derived stem cells can be cultivated easily, expanded efficiently and kept frozen until needed. After cryopreservation, the cells were viable and displayed both neuronal and glial differentiation potential.

Tongbiao Zhao,  Zhen-Ning Zhang,  Zhili Rong … (2011)
Induced pluripotent stem cells (iPSCs), reprogrammed from somatic cells with defined factors, hold great promise for regenerative medicine as the renewable source of autologous cells. Whereas it has been generally assumed that these autologous cells should be immune-tolerated by the recipient from whom the iPSCs are derived, their immunogenicity has not been vigorously examined. We show here that, whereas embryonic stem cells (ESCs) derived from inbred C57BL/6 (B6) mice can efficiently form teratomas in B6 mice without any evident immune rejection, the allogeneic ESCs from 129/SvJ mice fail to form teratomas in B6 mice due to rapid rejection by recipients. B6 mouse embryonic fibroblasts (MEFs) were reprogrammed into iPSCs by either retroviral approach (ViPSCs) or a novel episomal approach (EiPSCs) that causes no genomic integration. In contrast to B6 ESCs, teratomas formed by B6 ViPSCs were mostly immune-rejected by B6 recipients. In addition, the majority of teratomas formed by B6 EiPSCs were immunogenic in B6 mice with T cell infiltration, and apparent tissue damage and regression were observed in a small fraction of teratomas. Global gene expression analysis of teratomas formed by B6 ESCs and EiPSCs revealed a number of genes frequently overexpressed in teratomas derived from EiPSCs, and several such gene products were shown to contribute directly to the immunogenicity of the B6 EiPSC-derived cells in B6 mice. These findings indicate that, in contrast to derivatives of ESCs, abnormal gene expression in some cells differentiated from iPSCs can induce T-cell-dependent immune response in syngeneic recipients. Therefore, the immunogenicity of therapeutically valuable cells derived from patient-specific iPSCs should be evaluated before any clinic application of these autologous cells into the patients.

W Strober (2001)
The dye exclusion test is used to determine the number of viable cells present in a cell suspension. It is based on the principle that live cells possess intact cell membranes that exclude certain dyes, such as trypan blue, Eosin, or propidium, whereas dead cells do not. In this test, a cell suspension is simply mixed with dye and then visually examined to determine whether cells take up or exclude dye. In the protocol presented here, a viable cell will have a clear cytoplasm whereas a nonviable cell will have a blue cytoplasm.

Dipika Singh,  L F Reichardt,  Yang Yuan … (2012)
The ability to culture and maintain postnatal mouse hippocampal and cortical neurons is highly advantageous, particularly for studies on genetically engineered mouse models. Here we present a protocol to isolate and culture pyramidal neurons from the early postnatal (P0-P1) mouse hippocampus and cortex. These low-density dissociated cultures are grown on poly-L-lysine-coated glass substrates without feeder layers. Cultured neurons survive well, develop extensive axonal and dendritic arbors, express neuronal and synaptic markers, and form functional synaptic connections. Further, they are highly amenable to low- and high-efficiency transfection and time-lapse imaging. This optimized cell culture technique can be used to culture and maintain neurons for a variety of applications including immunocytochemistry, biochemical studies, shRNA-mediated knockdown and live imaging studies. The preparation of the glass substrate must begin 5 d before the culture. The dissection and plating out of neurons takes 3-4 h and neurons can be maintained in culture for up to 4 weeks.