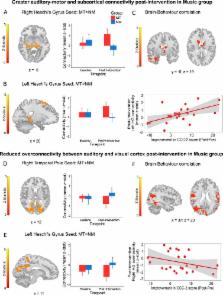 Andrea Norton,  Marie J. C. Forgeard,  Gottfried Schlaug … (2009)
The human brain has the remarkable capacity to alter in response to environmental demands. Training-induced structural brain changes have been demonstrated in the healthy adult human brain. However, no study has yet directly related structural brain changes to behavioral changes in the developing brain, addressing the question of whether structural brain differences seen in adults (comparing experts with matched controls) are a product of "nature" (via biological brain predispositions) or "nurture" (via early training). Long-term instrumental music training is an intense, multisensory, and motor experience and offers an ideal opportunity to study structural brain plasticity in the developing brain in correlation with behavioral changes induced by training. Here we demonstrate structural brain changes after only 15 months of musical training in early childhood, which were correlated with improvements in musically relevant motor and auditory skills. These findings shed light on brain plasticity and suggest that structural brain differences in adult experts (whether musicians or experts in other areas) are likely due to training-induced brain plasticity.

Consolidated standards of reporting trials (CONSORT) and the completeness of reporting of randomised controlled trials (RCTs) published in medical journals.

Lucy Turner (corresponding) ,  Larissa Shamseer,  Douglas G. Altman … (2012)
An overwhelming body of evidence stating that the completeness of reporting of randomised controlled trials (RCTs) is not optimal has accrued over time. In the mid-1990s, in response to these concerns, an international group of clinical trialists, statisticians, epidemiologists, and biomedical journal editors developed the CONsolidated Standards Of Reporting Trials (CONSORT) Statement. The CONSORT Statement, most recently updated in March 2010, is an evidence-based minimum set of recommendations including a checklist and flow diagram for reporting RCTs and is intended to facilitate the complete and transparent reporting of trials and aid their critical appraisal and interpretation. In 2006, a systematic review of eight studies evaluating the "effectiveness of CONSORT in improving reporting quality in journals" was published. To update the earlier systematic review assessing whether journal endorsement of the 1996 and 2001 CONSORT checklists influences the completeness of reporting of RCTs published in medical journals. We conducted electronic searches, known item searching, and reference list scans to identify reports of evaluations assessing the completeness of reporting of RCTs. The electronic search strategy was developed in MEDLINE and tailored to EMBASE. We searched the Cochrane Methodology Register and the Cochrane Database of Systematic Reviews using the Wiley interface. We searched the Science Citation Index, Social Science Citation Index, and Arts and Humanities Citation Index through the ISI Web of Knowledge interface. We conducted all searches to identify reports published between January 2005 and March 2010, inclusive. In addition to studies identified in the original systematic review on this topic, comparative studies evaluating the completeness of reporting of RCTs in any of the following comparison groups were eligible for inclusion in this review: 1) Completeness of reporting of RCTs published in journals that have and have not endorsed the CONSORT Statement; 2) Completeness of reporting of RCTs published in CONSORT-endorsing journals before and after endorsement; or 3) Completeness of reporting of RCTs before and after the publication of the CONSORT Statement (1996 or 2001). We used a broad definition of CONSORT endorsement that includes any of the following: (a) requirement or recommendation in journal's 'Instructions to Authors' to follow CONSORT guidelines; (b) journal editorial statement endorsing the CONSORT Statement; or (c) editorial requirement for authors to submit a CONSORT checklist and/or flow diagram with their manuscript. We contacted authors of evaluations reporting data that could be included in any comparison group(s), but not presented as such in the published report and asked them to provide additional data in order to determine eligibility of their evaluation. Evaluations were not excluded due to language of publication or validity assessment. We completed screening and data extraction using standardised electronic forms, where conflicts, reasons for exclusion, and level of agreement were all automatically and centrally managed in web-based management software, DistillerSR(®). One of two authors extracted general characteristics of included evaluations and all data were verified by a second author. Data describing completeness of reporting were extracted by one author using a pre-specified form; a 10% random sample of evaluations was verified by a second author. Any discrepancies were discussed by both authors; we made no modifications to the extracted data. Validity assessments of included evaluations were conducted by one author and independently verified by one of three authors. We resolved all conflicts by consensus.For each comparison we collected data on 27 outcomes: 22 items of the CONSORT 2001 checklist, plus four items relating to the reporting of blinding, and one item of aggregate CONSORT scores. Where reported, we extracted and qualitatively synthesised data on the methodological quality of RCTs, by scale or score. Fifty-three publications reporting 50 evaluations were included. The total number of RCTs assessed within evaluations was 16,604 (median per evaluation 123 (interquartile range (IQR) 77 to 226) published in a median of six (IQR 3 to 26) journals. Characteristics of the included RCT populations were variable, resulting in heterogeneity between included evaluations. Validity assessments of included studies resulted in largely unclear judgements. The included evaluations are not RCTs and less than 8% (4/53) of the evaluations reported adjusting for potential confounding factors.   Twenty-five of 27 outcomes assessing completeness of reporting in RCTs appeared to favour CONSORT-endorsing journals over non-endorsers, of which five were statistically significant. 'Allocation concealment' resulted in the largest effect, with risk ratio (RR) 1.81 (99% confidence interval (CI) 1.25 to 2.61), suggesting that 81% more RCTs published in CONSORT-endorsing journals adequately describe allocation concealment compared to those published in non-endorsing journals. Allocation concealment was reported adequately in 45% (393/876) of RCTs in CONSORT-endorsing journals and in 22% (329/1520) of RCTs in non-endorsing journals. Other outcomes with results that were significant include: scientific rationale and background in the 'Introduction' (RR 1.07, 99% CI 1.01 to 1.14); 'sample size' (RR 1.61, 99% CI 1.13 to 2.29); method used for 'sequence generation' (RR 1.59, 99% CI 1.38 to 1.84); and an aggregate score over reported CONSORT items, 'total sum score' (standardised mean difference (SMD) 0.68 (99% CI 0.38 to 0.98)). Evidence has accumulated to suggest that the reporting of RCTs remains sub-optimal. This review updates a previous systematic review of eight evaluations. The findings of this review are similar to those from the original review and demonstrate that, despite the general inadequacies of reporting of RCTs, journal endorsement of the CONSORT Statement may beneficially influence the completeness of reporting of trials published in medical journals. Future prospective studies are needed to explore the influence of the CONSORT Statement dependent on the extent of editorial policies to ensure adherence to CONSORT guidance.