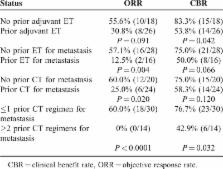 A promising option as the treatment of choice for premenopausal patients with locally advanced or metastatic breast cancer (MBC) could be the combination of a luteinizing hormone-releasing hormone analog and an aromatase inhibitor. However, no prospective studies on the efficacy of goserelin with exemestane in locally advanced or MBC premenopausal breast cancer patients have been reported.

We present the phase II trial of goserelin plus exemestane in a total of 44 premenopausal women with locally advanced or MBC. All patients received a subcutaneous injection of 3.6 mg goserelin every 4 weeks along with 25 mg exemestane daily. The primary end point was progression-free survival (PFS). The second end point included overall survival (OS), objective response rate (ORR), duration of response (DOR), and clinical benefit rate (CBR) based on complete response (CR), partial response (PR), or stable disease (SD) for ≥6 months.

This study suggested that goserelin and exemestane might be highly effective and well-tolerated regimens in premenopausal women with hormone-responsive, locally advanced or MBC.

Effects of chemotherapy and hormonal therapy for early breast cancer on recurrence and 15-year survival: an overview of the randomised trials.

Michael Gnant (2016)
Quinquennial overviews (1985-2000) of the randomised trials in early breast cancer have assessed the 5 year and 10-year effects of various systemic adjuvant therapies on breast cancer recurrence and survival. Here, we report the 10-year and 15-year effects. Collaborative meta-analyses were undertaken of 194 unconfounded randomised trials of adjuvant chemotherapy or hormonal therapy that began by 1995. Many trials involved CMF (cyclophosphamide, methotrexate, fluorouracil), anthracycline-based combinations such as FAC (fluorouracil, doxorubicin, cyclophosphamide) or FEC (fluorouracil, epirubicin, cyclophosphamide), tamoxifen, or ovarian suppression: none involved taxanes, trastuzumab, raloxifene, or modern aromatase inhibitors. Allocation to about 6 months of anthracycline-based polychemotherapy (eg, with FAC or FEC) reduces the annual breast cancer death rate by about 38% (SE 5) for women younger than 50 years of age when diagnosed and by about 20% (SE 4) for those of age 50-69 years when diagnosed, largely irrespective of the use of tamoxifen and of oestrogen receptor (ER) status, nodal status, or other tumour characteristics. Such regimens are significantly (2p=0.0001 for recurrence, 2p or =70 years), progesterone receptor status, or other tumour characteristics. 5 years is significantly (2p<0.00001 for recurrence, 2p=0.01 for breast cancer mortality) more effective than just 1-2 years of tamoxifen. For ER-positive tumours, the annual breast cancer mortality rates are similar during years 0-4 and 5-14, as are the proportional reductions in them by 5 years of tamoxifen, so the cumulative reduction in mortality is more than twice as big at 15 years as at 5 years after diagnosis. These results combine six meta-analyses: anthracycline-based versus no chemotherapy (8000 women); CMF-based versus no chemotherapy (14,000); anthracycline-based versus CMF-based chemotherapy (14,000); about 5 years of tamoxifen versus none (15,000); about 1-2 years of tamoxifen versus none (33,000); and about 5 years versus 1-2 years of tamoxifen (18,000). Finally, allocation to ovarian ablation or suppression (8000 women) also significantly reduces breast cancer mortality, but appears to do so only in the absence of other systemic treatments. For middle-aged women with ER-positive disease (the commonest type of breast cancer), the breast cancer mortality rate throughout the next 15 years would be approximately halved by 6 months of anthracycline-based chemotherapy (with a combination such as FAC or FEC) followed by 5 years of adjuvant tamoxifen. For, if mortality reductions of 38% (age <50 years) and 20% (age 50-69 years) from such chemotherapy were followed by a further reduction of 31% from tamoxifen in the risks that remain, the final mortality reductions would be 57% and 45%, respectively (and, the trial results could well have been somewhat stronger if there had been full compliance with the allocated treatments). Overall survival would be comparably improved, since these treatments have relatively small effects on mortality from the aggregate of all other causes. Some of the widely practicable adjuvant drug treatments that were being tested in the 1980s, which substantially reduced 5-year recurrence rates (but had somewhat less effect on 5-year mortality rates), also substantially reduce 15-year mortality rates. Further improvements in long-term survival could well be available from newer drugs, or better use of older drugs.

José Baselga,  Mario Campone,  Martine Piccart-Gebhart … (2012)
Resistance to endocrine therapy in breast cancer is associated with activation of the mammalian target of rapamycin (mTOR) intracellular signaling pathway. In early studies, the mTOR inhibitor everolimus added to endocrine therapy showed antitumor activity. In this phase 3, randomized trial, we compared everolimus and exemestane versus exemestane and placebo (randomly assigned in a 2:1 ratio) in 724 patients with hormone-receptor-positive advanced breast cancer who had recurrence or progression while receiving previous therapy with a nonsteroidal aromatase inhibitor in the adjuvant setting or to treat advanced disease (or both). The primary end point was progression-free survival. Secondary end points included survival, response rate, and safety. A preplanned interim analysis was performed by an independent data and safety monitoring committee after 359 progression-free survival events were observed. Baseline characteristics were well balanced between the two study groups. The median age was 62 years, 56% had visceral involvement, and 84% had hormone-sensitive disease. Previous therapy included letrozole or anastrozole (100%), tamoxifen (48%), fulvestrant (16%), and chemotherapy (68%). The most common grade 3 or 4 adverse events were stomatitis (8% in the everolimus-plus-exemestane group vs. 1% in the placebo-plus-exemestane group), anemia (6% vs. <1%), dyspnea (4% vs. 1%), hyperglycemia (4% vs. <1%), fatigue (4% vs. 1%), and pneumonitis (3% vs. 0%). At the interim analysis, median progression-free survival was 6.9 months with everolimus plus exemestane and 2.8 months with placebo plus exemestane, according to assessments by local investigators (hazard ratio for progression or death, 0.43; 95% confidence interval [CI], 0.35 to 0.54; P<0.001). Median progression-free survival was 10.6 months and 4.1 months, respectively, according to central assessment (hazard ratio, 0.36; 95% CI, 0.27 to 0.47; P<0.001). Everolimus combined with an aromatase inhibitor improved progression-free survival in patients with hormone-receptor-positive advanced breast cancer previously treated with nonsteroidal aromatase inhibitors. (Funded by Novartis; BOLERO-2 ClinicalTrials.gov number, NCT00863655.).

Claudia Allemani,  Hannah K Weir,  Helena Carreira … (2015)
Worldwide data for cancer survival are scarce. We aimed to initiate worldwide surveillance of cancer survival by central analysis of population-based registry data, as a metric of the effectiveness of health systems, and to inform global policy on cancer control.

This is an open access article distributed under the Creative Commons Attribution-NonCommercial-NoDerivatives License 4.0, where it is permissible to download, share and reproduce the work in any medium, provided it is properly cited. The work cannot be changed in any way or used commercially. http://creativecommons.org/licenses/by-nc-nd/4.0